Up early and went kayaking on the lagoon. We watched the sun rise through an island of dead Coolibahs.  I asked Bev what had we done to deserve this. Dusky wood swallows swooped around us, not at all concerned at our presence. If one was ever going to become one with nature it was this morning. 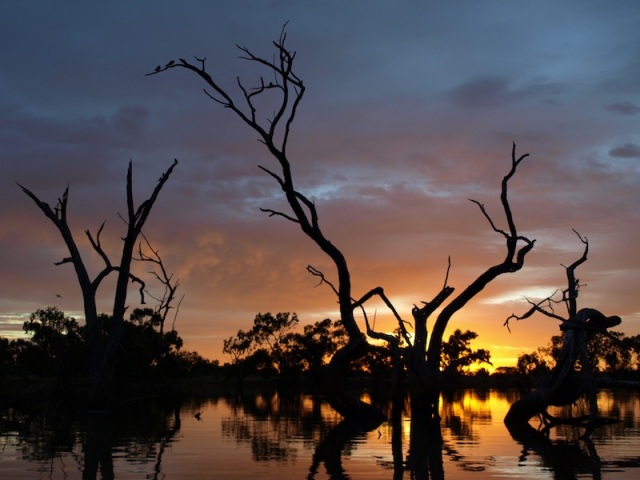 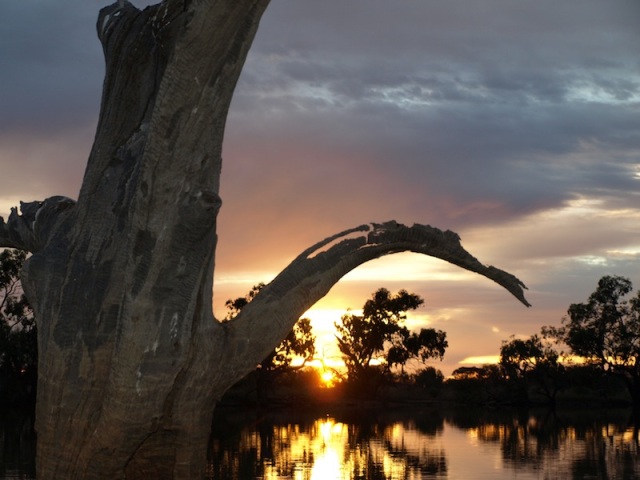 The following photos are a sample of Bev’s little things.

Crab shell on the edge of Cardenyabba Lagoon. Not unusual, you might say, around a lagoon but when you consider their swimming hole might be dry for a decade or more it is most unusual.  Crabs of the arid country have unique ways of staying alive through dry spells. They dig deep burrows in which they hold up for years at a time. If they have the urge for water and the lagoon is dry they emerge from their burrow at night and do the ‘stubby from the cold fridge’ condensation trick.  When they get to the surface they just hang around until the coldest period of the night then go back down into their burrow.  Going from the cold outside environment down into the warm burrow results in condensation forming on the outside of their shell.  There you have it, wet shell; all the crab has to do is sup the condensation off. 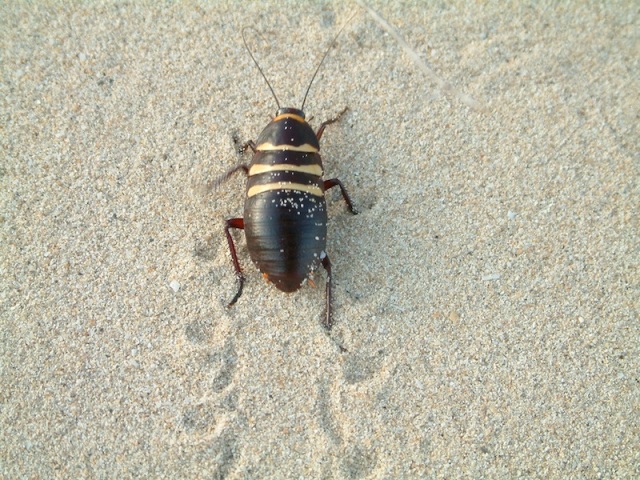 Pandanus Cockroach. Also known as a minibeast (without a skeleton).  You are looking at a pretty ancient creature here, some say a living fossil because this cockroach’s grandparents were around 359 million years ago. In fact they may have been the first flying animals on the planet. 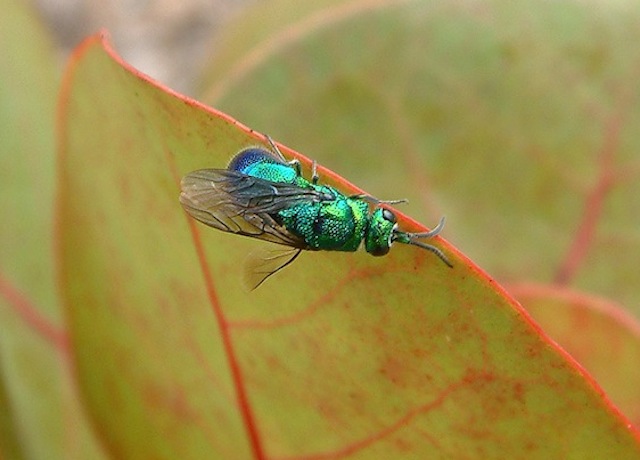 This is probably the Green Bottle fly. If it is, it has a short lifespan of 9-21 days so if it wants to live life to the full it needs to get busy blowing things and not swanning about on this leaf! 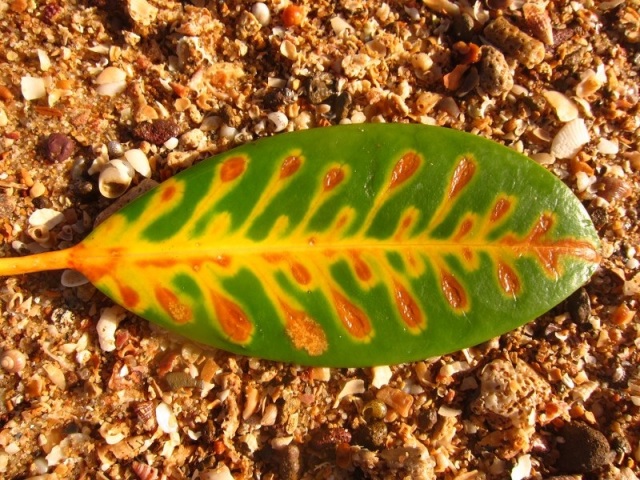 Reticulation veins on a leaf.  Looking at the variegated veins on this fallen leaf makes me think about how much we don’t know about nature.

Grevillia Dryandra.  The genus Grevillia was named by Sir Joseph Banks after his friend Charles Greville who was the co-founder of the Royal Horticultural Society of England.  This photograph was taken in the Gulf country in the Northern Territory. 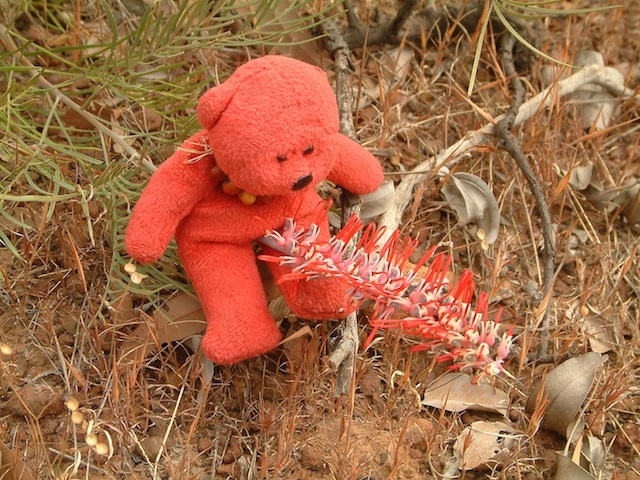 T Bear on pay dirt. He found some honey on the flowers of the Grevillia.

Bush Coconut from a Desert Bloodwood Gall (split in half) .  I had no intention of mentioning sex in this blog but I have to tell you about the sex life of the coccid insect (that’s the yellow sac in the middle of the Bush Coconut).  The female coccid has no legs, wings or antennae. She has no need for these accoutrements because the female doesn’t come out of the gall. Her lover pokes the tip of his abdomen through an air hole and does his stuff.  Soon after, she gives birth to male offspring only who grow into adults inside the gall.  As the young males reach maturity, the mother then produces females who cling to the long pointed tails of their older brothers when they leave the gall to find a mate. Having hitchhiked to a branch outside, the young female finds a spot of her own and she injects a chemical into plant tissue, which causes a new gall to grow around her.  Inside, she undergoes a series of moults and grows to her adult shape.  After the young male has seen his sister settled he goes looking for a mate, does his stuff and dies within 48 hours.  Makes you wonder if having sex under these circumstances was worthwhile!

This information was gleaned from Alice Springs Desert Parks web page.  What the researcher doesn’t say is if the young male has one or multiple experiences before passing on!

The photo was taken on a trip from Alice Springs to the Pitlands in SA. We had in our company a couple of blackfella friends who insisted we taste not only the coconut-textured, eucalypt-flavoured inner lining of the gall, which was quite acceptable, but we also had to eat the mother coccid. An experience like this is called ‘bridging the gap’. 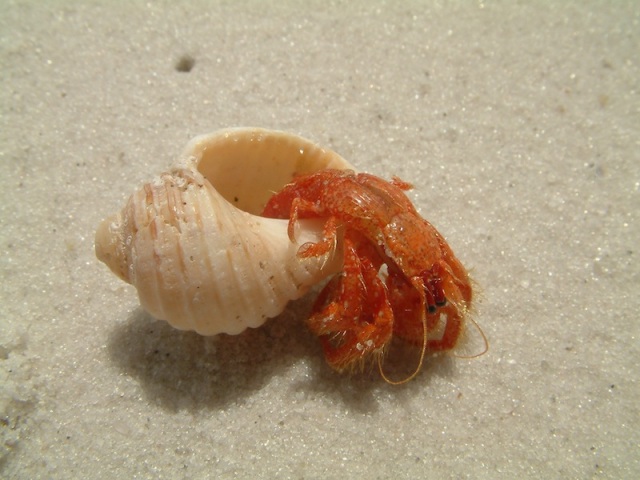 Hermit crab.  A hermit crab with an oversized shell in tow will grow faster than one with a tight fitting shell.  Every now and then the crab discards a tight shell for a larger one but not before it has a replacement at hand. 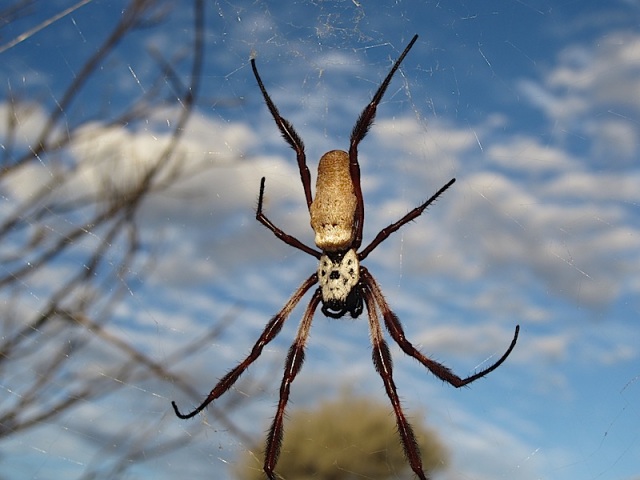 Golden Orb-weaver. This is a female, the male is much smaller and not as decorative.  The name is derived from the fact that the spider weaves an orb-shaped web, usually slung between two trees.  As a protection from predators such as birds they build an outer web as a deterrent.  However one predator, a wasp, sits at the periphery of the web and rattles it to simulate a caught insect.  The spider goes to investigate and, bingo, wasp has a meal!   There are other dangers lurking at the outer edge of the web too. Male Orb-weavers sit waiting for the opportunity to whip in and mate. 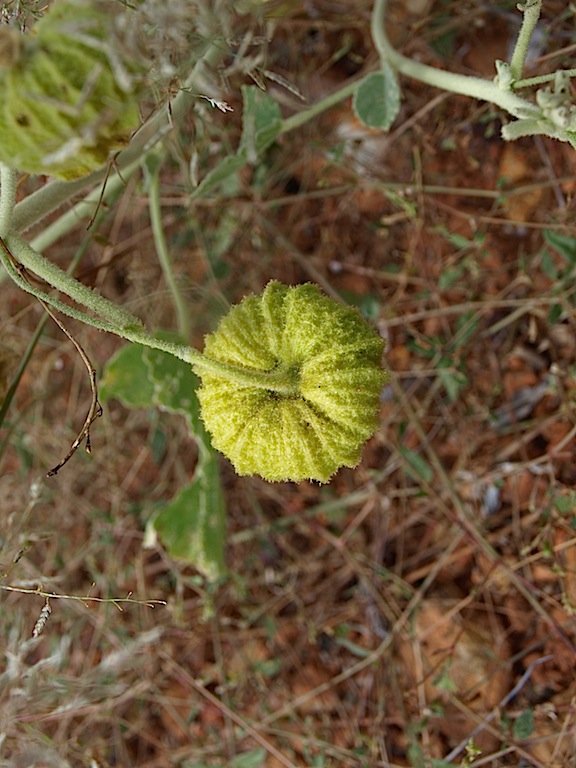 Seed of the Lifesaver bush. When the seed is dry it looks just like a Lifesaver lolly with a hole in the middle.

Meadow Argus butterfly (Junonia villivda).  Junonia joined us for lunch and shared our cucumber. This butterfly is widespread throughout Australia and the Pacific; in Australia it has one claim to fame, it appeared on a stamp in 1998.

Operculums in a sandy creek bed. Operculumsare the little caps from a Eucalypus flower.  When the cap comes off the flowerbud stamen unfold. These caps are what Bib & Bub wore on their heads in stories written and illustrated by Australian author May Gibbs. 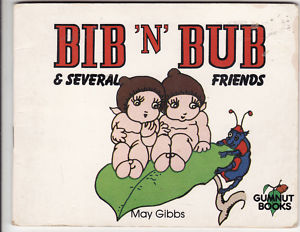 After our early foreshore walk and leisurely breakfast we drove to the western access point of Currawinya  NP because access to the park from the east is restricted at the moment due to floodwaters and approaching the NP from the west on Kilcowera Station was our only alternative.  Bev, the boys and I have visited the lakes in the park a number of times in the past and we were anxious to see them once again.  It was an amazing sight to see water flooding out onto the plains. Deep narrow channels, full to the brim and surrounded by low heathland reminded me of both the buttongrass plains of the SW wilderness of Tasmania and the salty mud flats of East Arnhem Land. Readers who have experienced both geographical features will understand how unusual the flats we walked across today actually are. 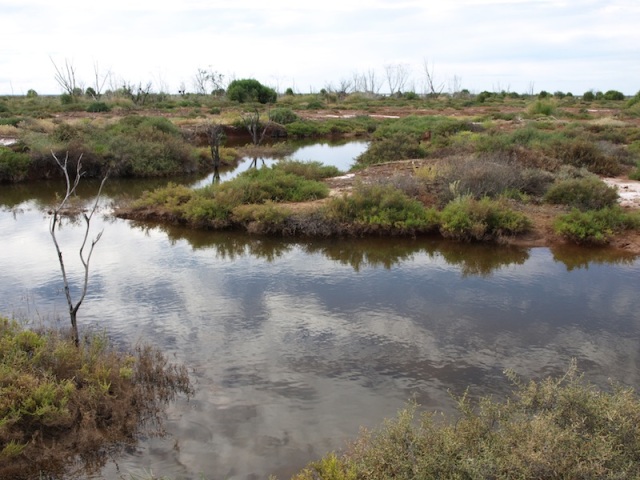 Heath on the edges of Lake Wyara.

The route back to camp took us past Murder Bore.  The story is that in 1940 a drilling contractor unable to pay the due wages to his assistant murdered him, burnt the body then crushed what remained of the skeleton and tipped it down the bore.  The police investigating the disappearance of  the ssistant found a few recognisable bits and pieces and arrested the contractor who was sentenced to life imprisonment. 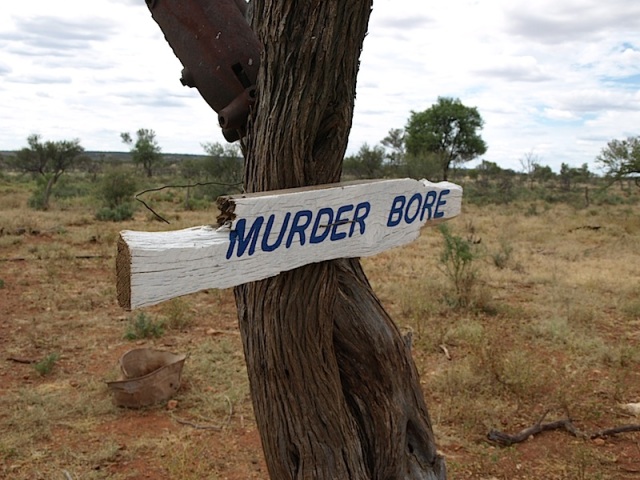 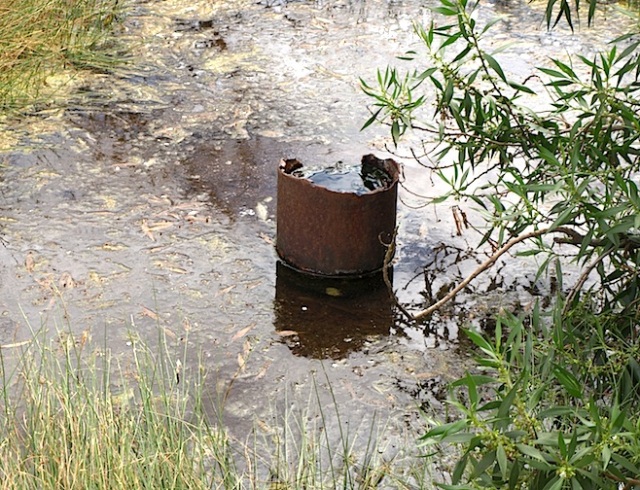 The bore head in question

An idyllic camp on Cardenyabba lagoon.   In the late 1990s we did a lot of wilderness walking in Tasmania and on one trip decided we were getting too old to be climbing mountains with 20kg packs.  As an alternative we thought we could explore the wilderness sitting down so bought these two kayaks. Because it is possible to carry more food in a kayak than in a backpack it means you can go out into the wilderness for longer periods of time.

Tomorrow we are leaving the Cardenyabba Lagoon camp and heading for the Cooper’s Creek flood plain and from all accounts there is going to be a lot of water about.

A traveller without curiosity and observation is like a bird without wings.