The indigenous folk of Groote have had outsiders coming to their land for thousands of years and the reasons, whether it was a thousand years ago or today, are still basically the same. They come to exploit natural resources or to preach the word.  There is a saying on Groote that people come these days because they are one of the following: a missionary, a misfit or a mercenary. The missionary needs no explanation, a misfit is someone who finds it difficult to work in the mainstream and a mercenary is one who is here solely for the money.

It is believed that Chinese and Arab vessels may have been the first to sail Groote waters but the first recorded visit by Europeans was in 1623 when the Dutch ship Arnhem under the command of Willem van Coolsteerdt made it into the Gulf. The Dutch didn’t pester the local aboriginal people, coming ashore for fresh water only.  The island remained unnamed until Able Tasman called in 1644 and gave the island its Dutch name meaning big island. Flinders, who seemed to poke into every nook and cranny around Australia’s coast, sailed Groote waters too. On one occasion when his crew went ashore for water they had an altercation with the locals and one of his crew was killed.

Thousands of years before Flinders arrived fishermen from the Indonesian archipelago came to the island to fish and gather beche-de-mer (trepang).  The Macassans from Sulawesi were probably the first regular outsiders to come to Groote.  They came on the winds and set up camps where they gathered and dried trepan and in return they traded steel implements with the locals and taught them how to use them. Once the locals had access to steel cutting tools it meant they could make log canoes, prior to that they paddled about in bark ones. The aboriginal people of Groote and the Macassans had a good thing going but it all came to an end in 1907 when the Australian government banned their visitations.   On Groote and on the surrounding islands there is evidence of the Macassans: old fire places, graves and living tamarind trees.  I suppose the Macassans were the first mercenaries to come to Groote because they didn’t come to convert but came to exploit the island’s resources. 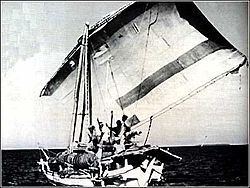 A MACASSAN PRAU. A prau is any Indonesian vessel with an open deck.

Flinders recorded seeing more than sixty such boats when he circumnavigated the island in 1803.  It is difficult to believe that around 6000 Macassans a year were coming to Arnhem Land waters to gather trepang, pearls and harvest fish.

Trepang, beche-de-mer or sea slugs were collected from the sea floor, boiled then dried and sold as a food source back in Indonesia.

Australia has thousands of kilometres of coastline but few Australians consider us a sea-faring nation but we are and I came to this realisation when I saw the variety of boats and ships coming and going to Groote. 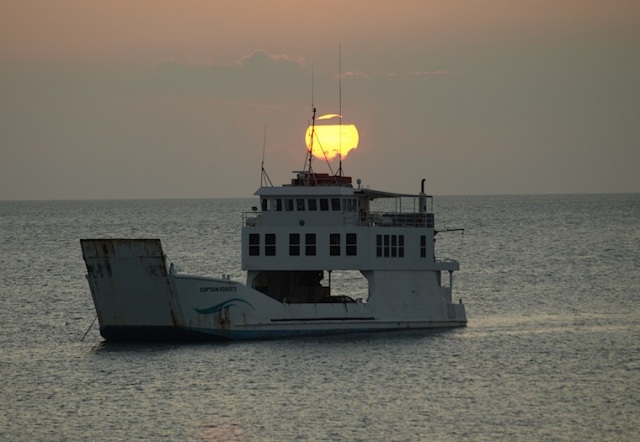 This small barge goes between Numbulwar on the mainland, Bickerton Island and Groote Eylandt.

Trawlers often call in to Alyangula for crew R & R. 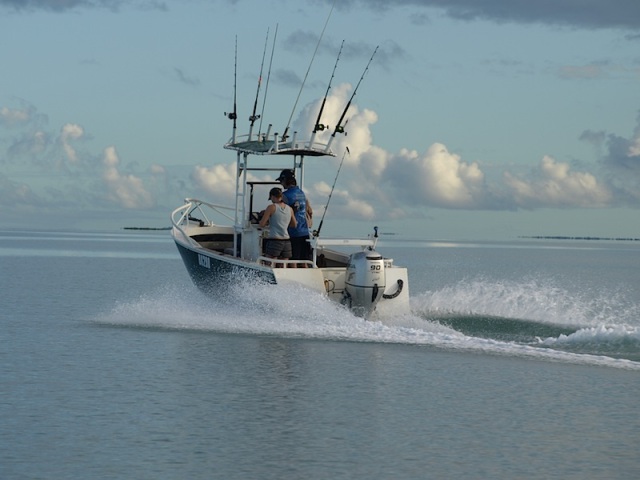 Small and large tinnies travel between Groote, Bickerton Island and the mainland.  On Groote there are a lot of big boats and 4WDs in front yards.  I have this theory that if you want to know how affluent an area is look at what magazines are for sale at the local newsagent. If there are magazines on property and financial investments, luxury cars, yachting, boating and exotic holiday destinations you know the locals are cashed up and have money to spend.

A TOLL barge from Darwin

Toll Transport recently bought out the shipping company Perkins.  Perkins were the first to start barge deliveries to the islands and ports of Arnhem Land from Darwin.  The business started in the late 1940s and early 1950s using WW2 landing barges.  It takes five days for the barge to travel from Darwin to Groote and if you are waiting for a parcel to arrive it can take up to fourteen working days to arrive.  Frustrating if you are waiting for something like clay and you want to get on with the job.

The first European settlement on Groote was established at Emerald River (our country) in 1921, in the form of a Christian mission.  When first established it catered for the needs of mixed blood peoples only, but in latter years the mission leaders concentrated their efforts on the locals.  Depending on your point of view, ‘missionising’ the locals has either a positive or negative outcome. If local culture and traditions are lost it is negative but if followers are saved from the demon drink and other white man vices, and I know many who have, it has positive effects. 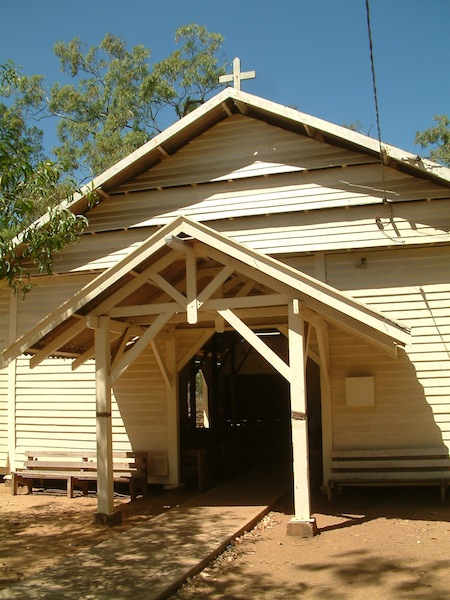 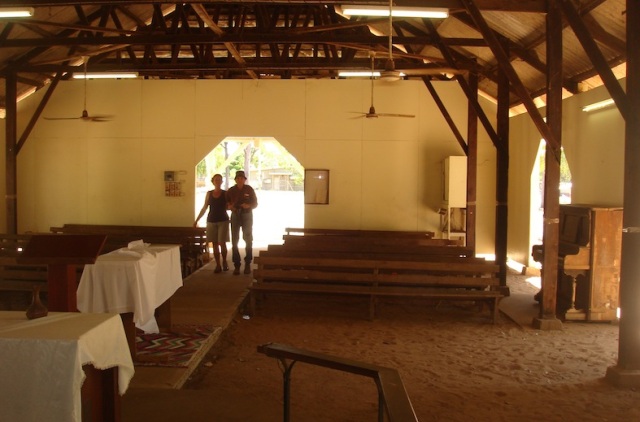 Bev and I walking down the aisle

My sister Yulki outside her church

Yulki is the first Aboriginal woman to be ordained into the Anglican church. She is a serene woman and I am proud to be part of her family. 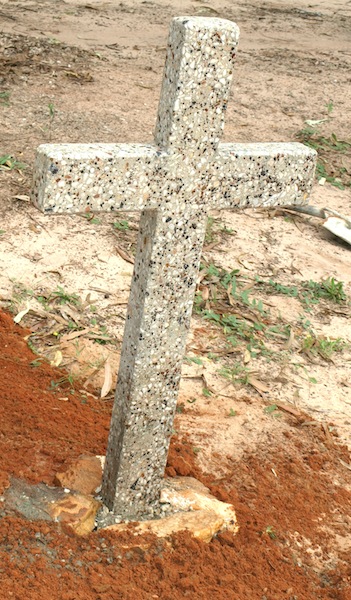 Understandably, this is a high security area so you cannot waltz down the wharf and have a chat to the captain of the vessel. If I could I would ask if we could board his ship and go to wherever he was bound.  That would be true travel freedom.

Manganese dominates the social and economic structure of Groote Eylandt. GEMCO is a subsidiary of BHP Billiton who have been scratching and digging on Groote since the early 1960s.  Manganese in various forms is used in the production of steel, aluminium alloys, batteries and dyes for glass and ceramics to name a few.  It is a dirty unattractive material, not the sort of stuff rock hounds and gemologists go looking for, although, I do think if it was polished it would look similar to polished haematite (iron ore).  Manganese is heavy. A piece the size of a 44 gallon drum weighs about 6 tonne.  A piece this weight is sufficient to make to 551 normal sedan cars or 930 228 AAA batteries.

Manganese mining, like many mining activities, has a downside and that relates to dust.  Excessive exposure may be associated with an irreversible brain disease with prominent psychological and neurological disturbances known as maganism or manganese poisoning.  Symptoms include hallucinations, emotional inability, compulsive and aberrant behaviour.  The natural blocker to stop manganese entering the brain is magnesium and calcium, both in short supply on the island. I have noted that some newcomers to the island take these supplements so maganism is more than just hearsay.

Matthew Flinders in 1803 was the first European to note the presence of ironstone and quartz on the island.  In 1907 a South Australian Government geologist noted manganese outcrops but it was not until 1955 that commercial geologists took manganese samples from the island. Between 1960 and 1963 negotiations between BHP and the Church Missionary Society (representing the local Aborigines) worked out royalty payments and agreements, which allowed large scale mining to start. In 1964 the BHP subsidiary, GEMCO (Groote Eylandt Mining Company), was granted leases on the island and in 1966 the first shipment of manganese ore left the island bound for a processing works at Bell Bay near George Town in Tasmania. The manganese mined on the island is now exported to China, Japan and the USA.

Manganese in the raw

The area to be mined is cleared of timber then the overburden is removed to expose the manganese, sometimes just a few metres below the surface.  Once the ore has been mined the overburden is replaced and the mined area is revegetated.  Surprisingly, it doesn’t take all that long for plants like eucalypts and acacias to establish themselves and I think it’s because of the high moisture content of the soil and the humidity. 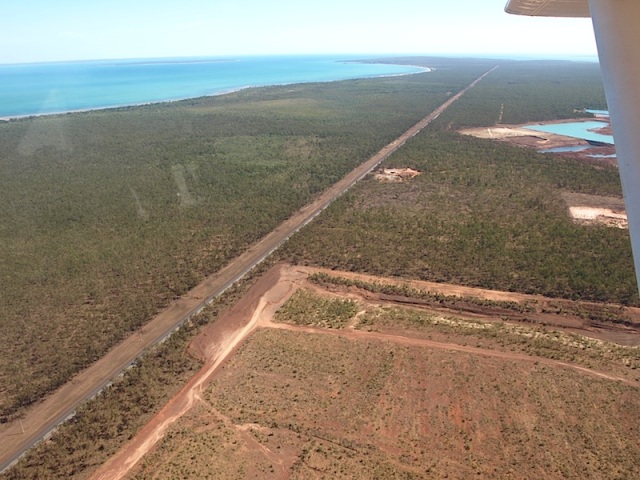 This highway links Angurugu Community and the ore processing plant with Alyangula township and the loading facility on the distant horizon.

The manganese mining operation on Groote is the third largest in the world but the most efficient and it produces about a quarter of the world’s needs.  If you had shares in this operation I think you would be doing OK.