Groote Eylandt – Out and About

Posted on September 1, 2012 by tbeartravels

As mentioned previously in this leg of the blog there are a number of places that outsiders are not permitted to go on Groote Eylandt unless in the company of a traditional owner, however because we became close friends with some of them they insisted we visit their country.  Following are a few of the places we were taken.

Kids fishing. Why would they ever want to leave the island when they can go fishing every day? 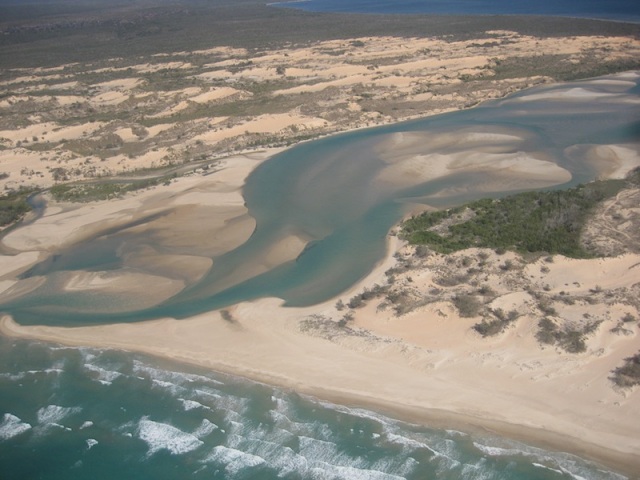 Catching breakfast. There are few places on Groote where you can’t catch a fish.

The water looks so inviting and swimming is for the wary. When we clean fish we always take the leftovers well away from camp. At this spot we took leftovers to an island where a sea eagle had a nest and on the beach were croc tracks, so they were about. 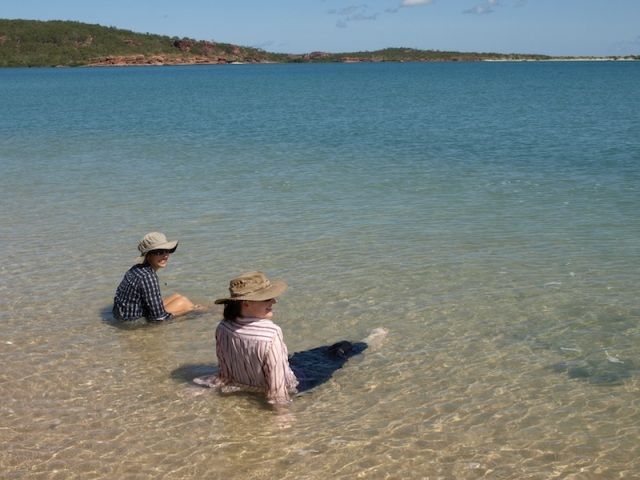 Kelly and Sara. Sitting at the water’s edge is about the limit of swimming activities.

Lois, the traditional owner of this country, was born on the beach here. Her father was in a canoe fishing at the time.  These days mothers-to-be are flown off the island to have their babies. 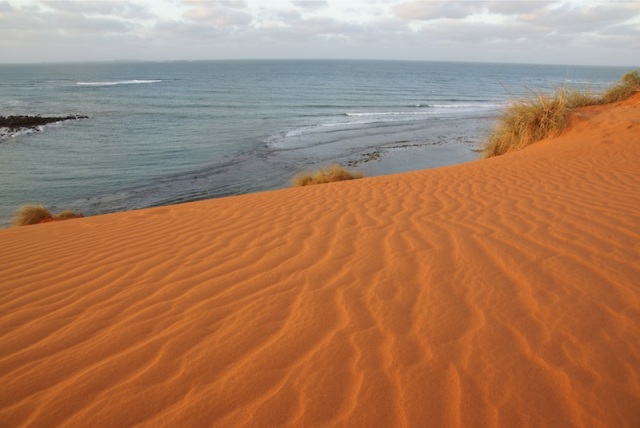 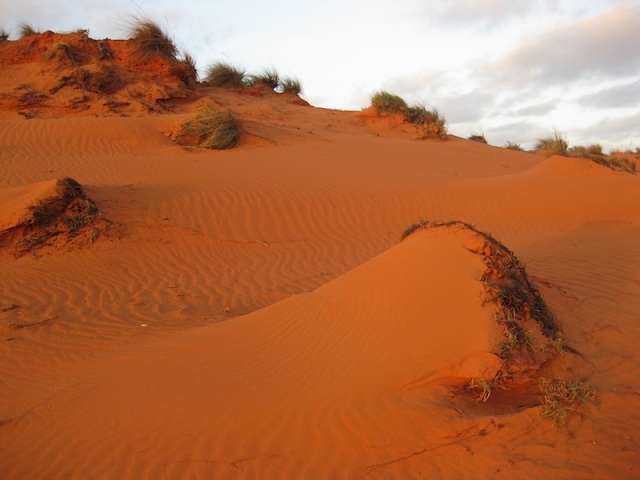 Looking west from this spot you’d think you were in the Simpson Desert, however the view east as shown is an entirely different matter.  There are few places in Australia where red sandhills roll into the sea but there are plenty where white sandhills confront the sea.

One rarely sees crocodiles around Groote Eylandt but they are lurking about.  Every now and then a dog disappears and occasionally when fishing their periscope eyes break the surface looking for what’s on offer.  When they pester the local community they are dispatched, as happened recently in the community of Angurugu.

In mid July 2012, a 4.5 metre long croc was shot by police (with the approval of locals) in the Angurugu River near the community at a spot where kids often swim.  The local kids swim in the rivers but only if the water is clear.

One of our weekend camp sites

Bev and I pitched our mozzie dome on the elevated flat rock platform, well up above croc height!  The camp rated 9.9 on the Hillier camp scale.

Sometimes it is a full-on 4WD effort to get to some of the camps but it is worth it.  During school holidays most teachers leave the island for a holiday. I can’t understand why, paradise is here on their doorstep. 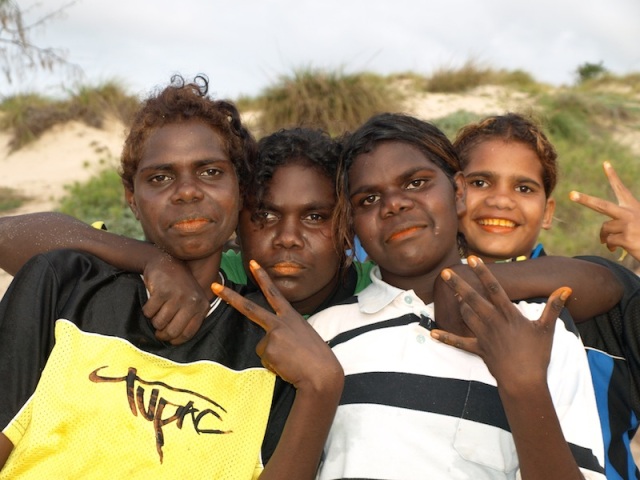 Some of Tim’s students we took on camping trips. The orange stain on their lips is from eating salty plums.

The Banyan Tree is a favourite destination as there is a little excitement getting there including some  water crossings, steep sandhills and beach driving.  It’s a beautifully sheltered spot tucked in under the enveloping branches of the tree.

Inside the Banyan tree

It is difficult to show the size of the tree because the single trunk has long since been smothered by the strangling effects of the aerial prop roots.

The Groote Banyan tree (Ficus sp.) is an example of a strangler fig that begins life as an epiphyte (a plant that gains support from a host tree) in the crown of another tree.  Its roots grow down and around the stem of the host, their growth accelerating once the ground has been reached.   Like other fig species, which includes the common edible fig, it has a unique fruit structure which is dependent on fig wasps for reproduction. Buddha is believed to have sat under a Banyan taking on enlightenment and Robinson Crusoe made a home in one.  Hindus believe that their gods sit on the leaves of the Banyan trees.

At Thimmamma Marimanu in Andhra Pradesh State, India, there is the largest Banyan tree in the world recognized by the Guinness World Records.   It has over 1100 prop roots covering an area of 2.1 hectares (5.2 acres).   The canopies of some Banyans provide shade for entire villages and Alexander the Great reportedly camped with an army of 7,000 soldiers under a single Banyan tree.  I have never counted the number of prop roots on the Groote Banyan tree but since researching the history I wish I had.

The track to the Banyan tree after rain.

Tim took a mob of kids camping to the Banyan tree on a school excursion and during the night it began raining so they decided to pull out otherwise they could have been isolated for a week.  They drove for five kilometres along this track in the dark with water up to the top of the bullbar. At times water was over the headlights so they were driving in the complete dark. This photograph was taken two days after the event when we went in to retrieve the school camping gear.

Bogged on the sandhill on the way out.

Because we were towing a trailer with the school camping gear on board we had trouble negotiating the sandhills, but with a spot of snatching, pushing, shoving and shovelling we made it through. 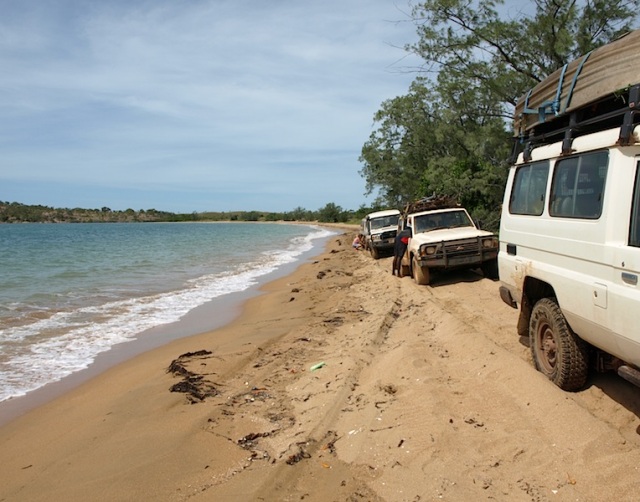 Beach front near the Banyan tree.

There is something chilling about driving along a beach with the waves breaking to the side of the vehicle.

Rusted remains of a Toyota troopie.

This is what is in my mind when beach driving.  This troopie became stuck and the tide came in.  It took four years to deteriorate to this stage.

Four wheel drives are not the only vehicles to get caught by the tide. 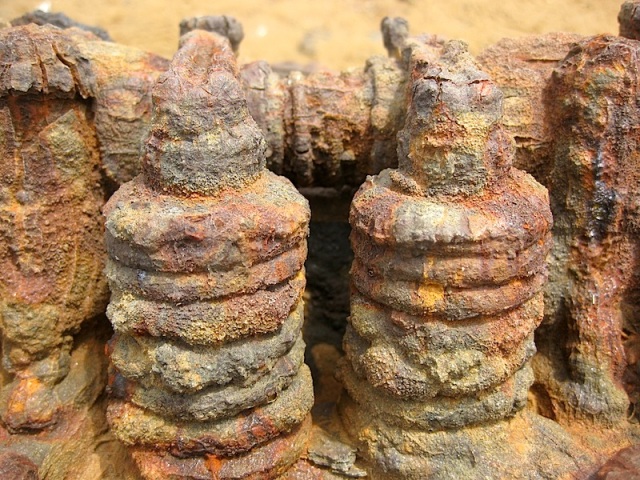 Tappets and valve springs on a bulldozer motor.

A popular and safe swimming hole

Our last posting for  Groote will be of family, friends and sharing of skills.

3 Responses to Groote Eylandt – Out and About