Posted on September 15, 2012 by tbeartravels

On the road by 9-00am not knowing exactly where we were going except to say south.

Not far down the track from the Port Smith intersection we wheeled into a roadside fruit and vegie stall, not common in this empty part of the country.  The owner was a bit of a character as she had a very stern message for the travellers with dogs.

The owner said she loved dogs but she didn’t appreciate customers’ dogs crapping and cocking their legs around her stall.

The next access point to the coast was at Eighty Mile Beach. There was a caravan park so we went in thinking we may have found a quiet spot for a camp but not so, the caravan park was sardine-like and the beach was jam-packed with people.  After a couple of photographs we left somewhat disillusioned thinking that, of eighty miles of beach, near seventy nine and a half of the miles were out of bounds to campers like us. 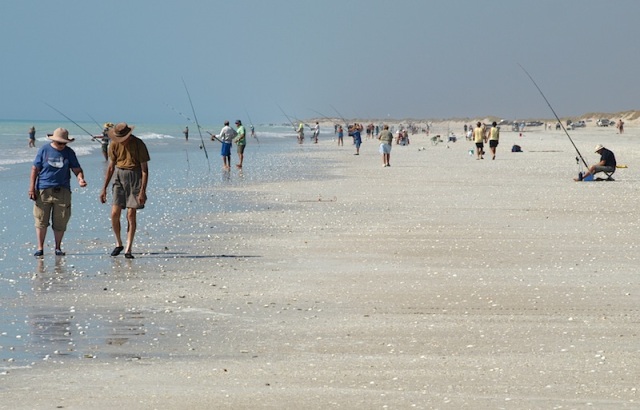 The masses on Eighty Mile beach.

Ian and I drove along a good part of the beach in 1970. There were no caravan parks or people on the beach in those days.  The road then was a sandy track running parallel to the beach about 100m metres inland. The  highway we travelled on today is twenty-two kilometres inland.  I think I prefer the old road somehow. 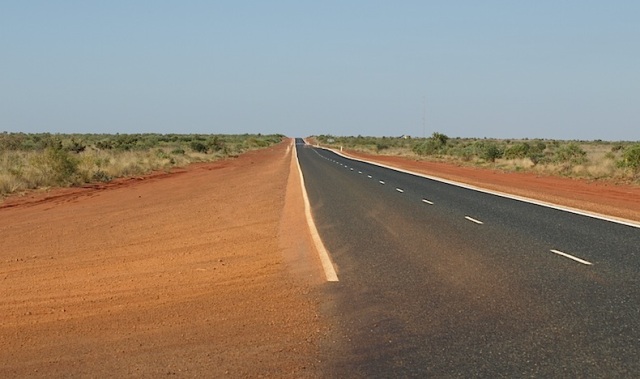 After the Eighty Mile Beach people exposure we headed south, desperate for a quiet camp. Stopping at a roadhouse for fuel we found homemade trifle. Couldn’t resist it!  Not many roadhouse cooks go to the trouble of producing home cooking like this. I think the reason they did it here was that the cook was an older lady and she knew that travellers would love to get something that is not mass-produced.

Further south we found an acceptable camp on the roadside hidden by a clump of mini richi trees, a camp which doesn’t rate high on the Hillier camp scale because the highway is close by but it does have one redeeming feature, active nocturnal ants.  Earlier in this blog (Day 2 Leg 1) I said I hadn’t seen many Mulga ants. Well, if these are Mulga ants, and I suspect they are, I have seen them now. 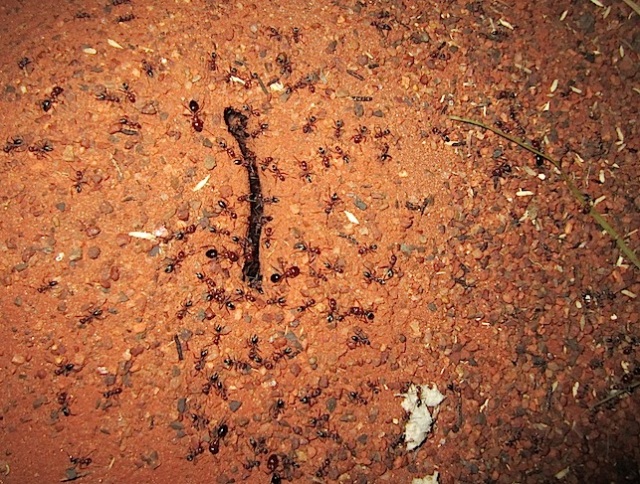 No early cuppa today, packed up and headed south. Sometimes, especially if it’s cold in the morning, we get on the road and have breakfast further down the track.  This we did today but the problem was that there were few suitable places to pull off as fences run close to the road on both sides. In desperation we stopped by a bridge and soon after realised it was not the best stop for a leisurely breakfast. Trucks thundered past, a couple overtaking each other at reckless speed.  Iron ore dust wafted over us so after a brief breakfast we continued towards Port Hedland.

Port Hedland in the 1970s was a small unattractive industrial estate. Today it is similar but with a population pushing 42 000 it is a big industrial estate.  There is building going on everywhere. The main shopping precinct is dug up and being beautified and around the outskirts housing estates are spreading like a tsunami across the dunes.  Rental properties are hard to come by; rent for a two-bedroom house is around $3000 per week.

BHP Billiton is a big employer in the town as the iron ore mined in the east around the  Pilbara is loaded onto waiting ships at the port nearby for export overseas.

Mid afternoon we were in Roebourne. It is an old historic place but unfortunately much of its history involves the slave labour and imprisonment of Aboriginal people back in the late 1880s and early 1900s.  Australian attitudes to misdemeanors committed by early European settlers vary considerably. Some feel shame and others say they can’t be held responsible for the actions of past generations, which I believe is true, but I do think we need to know what transpired and learn by the events.  History can teach us not to repeat the atrocities.

Like it or not, this is how it was.

The practice of kidnapping and forced labour of Aboriginal people was known as ‘Blackbirding’ and was a profitable business for some early settlers. 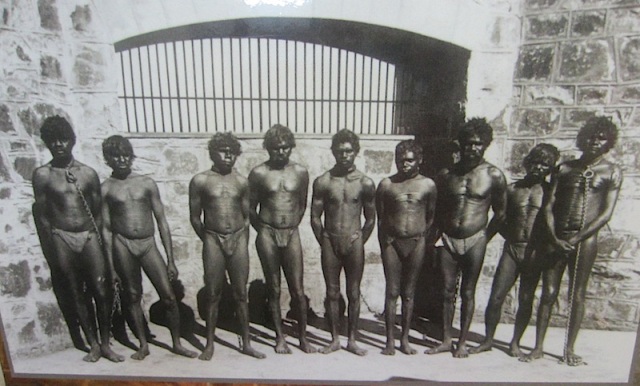 Dwell on the plight of the poor buggers who have been chained to this ring.  Of note is the ring that went through the wall bolt was actually worn down, so it had a lot of use.  The band on the floor goes around the prisoner’s neck.

My first visit to Roebourne was in 1969. Ian and I used it as a base in the early stages of the Robe River iron ore railway survey (from Cape Lambert to Pannawonica).  In those days the town had a lot of social problems, mostly caused by the excessive use of alcohol, not only by the Aboriginal people but the white population as well.

In many respects those days were pioneering days. There was very little support for people like us involved with the groundwork in establishing the iron ore industry of the area. Our accommodation was a caravan and as the survey proceeded towards Pannawonica we towed the van with us. This sounds comfortable enough but daytime temperatures hovered around 45 degrees Celsius in the shade, there was no air-conditioning and we had to cook for ourselves as we went.   Showering meant setting up a bush shower on the riverbank, heating water in a drum and washing as best we could.  I can’t imagine workers these days tolerating the hardships of the 1970s.  As the survey progressed, construction camps were built in our wake and by the time we were near the end of the survey we had the luxury of eating in the mess and sleeping in dongas.

Ian and I worked in the Pilbara on two separate occasions. The first was assisting with the actual survey of the centre line of the railway and the second time we set out bridge sites and trig stations.  For the second stint, Dick (Holly), a friend from home joined us. In between these two occasions we travelled overland from Colombo in Sri Lanka (Ceylon in the 1970s) to London passing through India, Pakistan, Afghanistan, Iran, Turkey and Europe.  On the way home we bought a 250cc BSA motorbike in Nairobi and toured Central Africa then returned to Perth and up to the Pilbara to work again.

Regardless of the hardships, those days were great days. We were in the prime of our lives and everything, including the heat and cyclones, was all part of the adventure.

This afternoon we called into an Aboriginal art centre in Roebourne to have a yarn because Bev and I are missing our family on Groote.  Some readers who have never had the opportunity to get close to the indigenous people of this land might find our feelings difficult to understand.  The local mob told us where to go for a good camp just out of Roebourne on the Harding River.

Camp on the Harding River, one of the few free bush camps we’ve had so far.