This morning we had an important task to complete.  I wanted to track down the location of the Book Bazaar because I was told there was a shop that sold vintage postcards which I wanted to copy for inclusion in this blog.  I like to include old images as it allows one to read the past rather than wade through written text.  As it is said, a picture is better than a thousand words.  Below are a couple of images for you to read.

Hooked on hooker at Café Ture.

The hooker is a smoking pipe through which tobacco smoke is drawn through water. Sometimes the water is flavoured with extracts of herbs.  Drawing smoke through water is supposed to purify it but even so, I don’t think I would want to partake.  Some restaurants provide the facility for those hooked on the hooker.

There are two things that I see here. Firstly, the strap over the seller’s shoulder connecting the tray with the basket on his back.  Having the two connected means they counterbalance each other.  Neat don’t you think?  The second point is the casement windows. They must have been popular at the time because in the previous image there are casement windows as well. 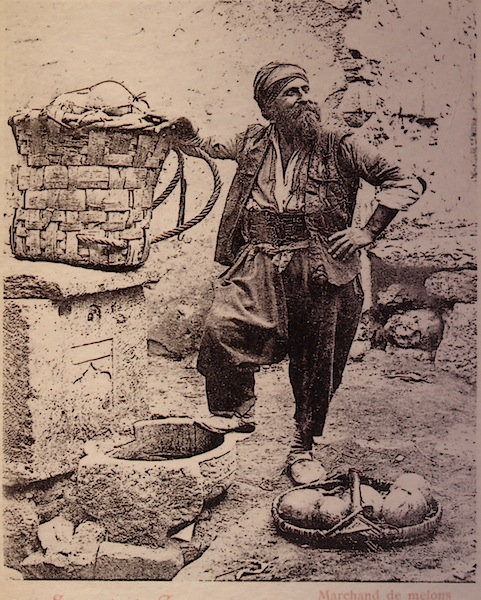 What I like about this image is the look on the sellers face. He appears to be a happy and proud man.  He has his foot on the bowl portion of a water drinking fountain.

These three images above plus others in this leg of the blog were provided with kind permission of Mustafa who has a shop in the Istanbul Book Bazaar.  Fortunately he spoke English and was able to tell us about bookselling over the centuries.

The Book Bazaar is an old and increasingly important part of Istanbul.  If you are a book lover it is a must visit even though most of the books for sale are in Turkish.  There are books in other languages as well and if you browsed seriously I reckon it might be possible to find a valuable book tucked away somewhere.

Bookselling as a profession emerged in the 14th century but it wasn’t until the Grand Bazaar was completed in 1460 and stalls were allocated that books were available in one central location.  Prior to this, men who sold books were called ‘bundlers’. They walked around the streets hawking books from bundles on their backs.  The 1894 earthquake devastated the bazaar and the booksellers moved to their present location where they have been ever since.  Unfortunately in 1950 the bazaar, along with many books and manuscripts, was turned to ash when a fire swept through the area.  Today the rebuilt bazaar houses twenty-three shops and it looks every bit as much as it did prior to the 1950 fire.  Mustafa’s shop is loaded with treasures including postcard reproductions, bank coins and notes and other curiosities including beautifully decorated miniature camel bone boxes.  Mustafa gave us two old coins as a gift and Bev bought a decorated bone box to add to her collection at home.  Thanks again, Mustafa, for permission to include the postcard images in this leg of our blog.  If any blog readers go to Istanbul be sure to call and see him. 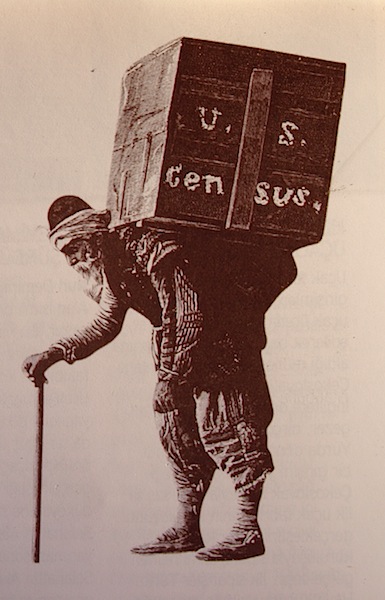 Today In the Grand Bazaar I saw an old boy carrying a load similar to this.  The only difference was he was carrying a load of flattened cardboard boxes.  I suspect this how the book bundlers carried the books. 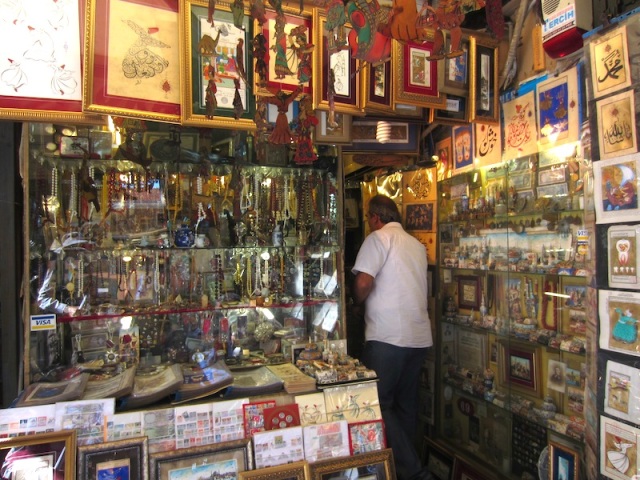 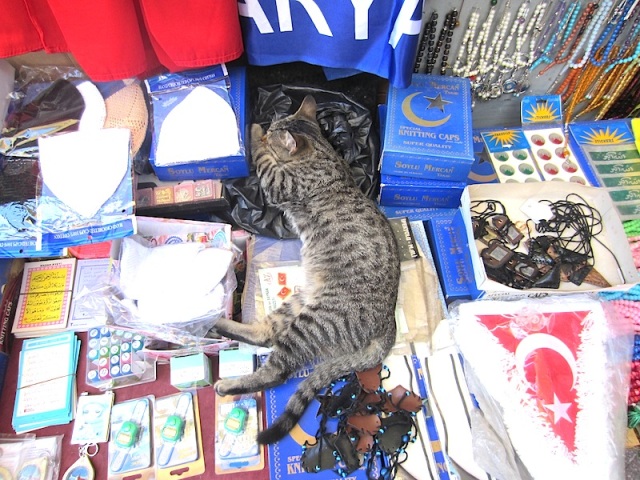 Cats in Istanbul are like the cow in India, they have sacred rights.

On the way home today we walked over a footbridge and under the bridge were a couple of  photographic opportunities.

Some drivers in Istanbul ignore one-way signs and drive against the traffic so authorities have installed these nasty devices in an attempt to change their minds. The car here is travelling in the forward direction, left to right.

During our roaming today we found Istanbul’s best kept secret, it’s not mentioned in any of the guidebooks or leaflets.  It’s Istanbul’s Gulhane Park next to Topkapi Palace. I’m thinking that it is my favourite attraction in Istanbul and I think it’s because it is away from the crowds, traffic and the usual humbug associated with the city. 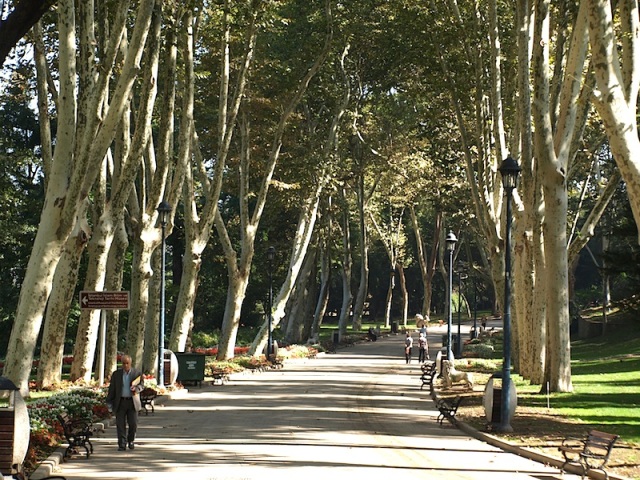 An avenue in the Gulhane Park 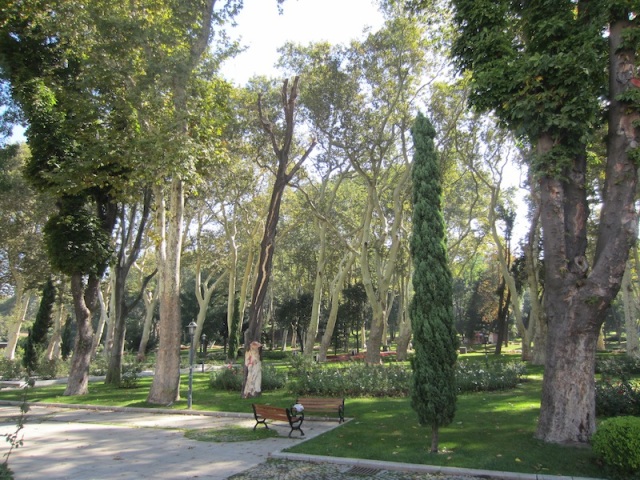 Whoever is responsible for the street trees of Istanbul are very conscientious as any mechanical damage or rot is attended in a meticulous fashion.  The tree doctors go to extreme lengths to save a tree not like at home where any signs of decay the tree is immediately removed.  The following photograph is an example.

Geodesic dome in the park.

I have to tell you that I have never been a lover of roses I prefer the natives however after a stroll though the rose garden today I have changed my mind, the blooms were absolutely wonderful.  I’m not likely to establish a rose garden at home I will prefer to remember the roses of Istanbul. 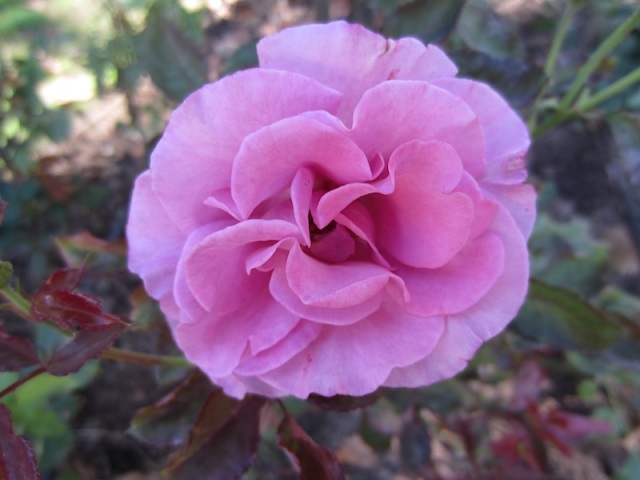 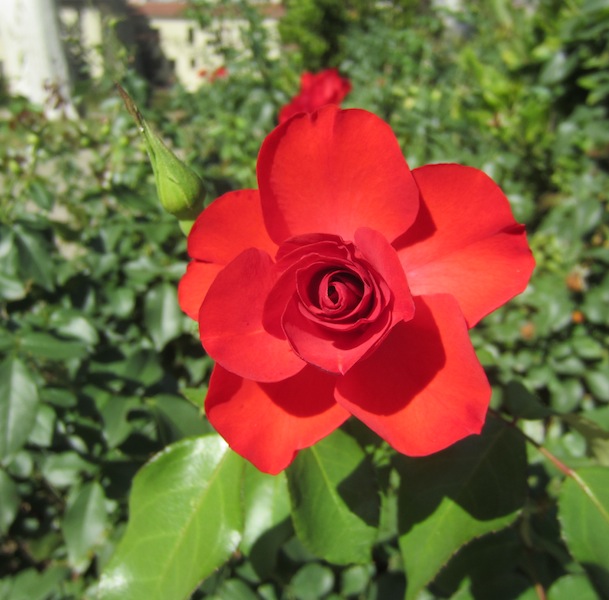 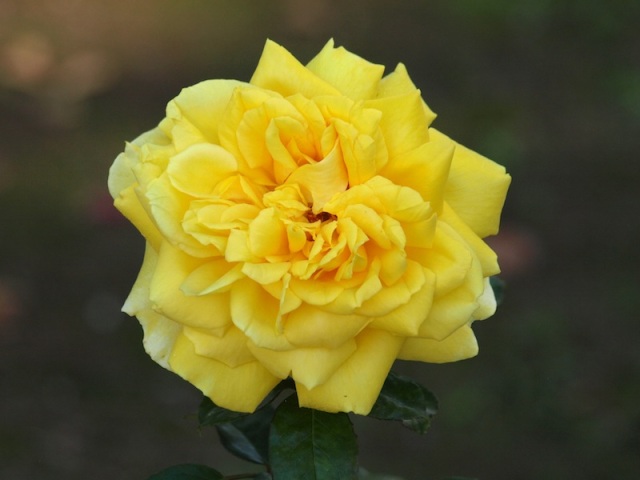 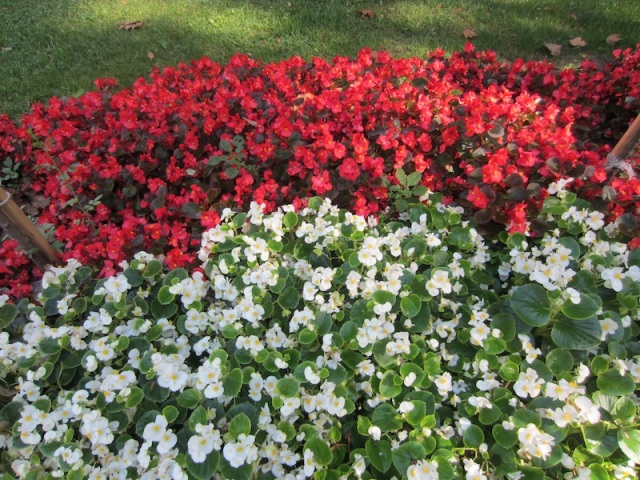 The rose garden was set in wax plant beds and from the quality of the rose blooms it’s obvious they are compatible. 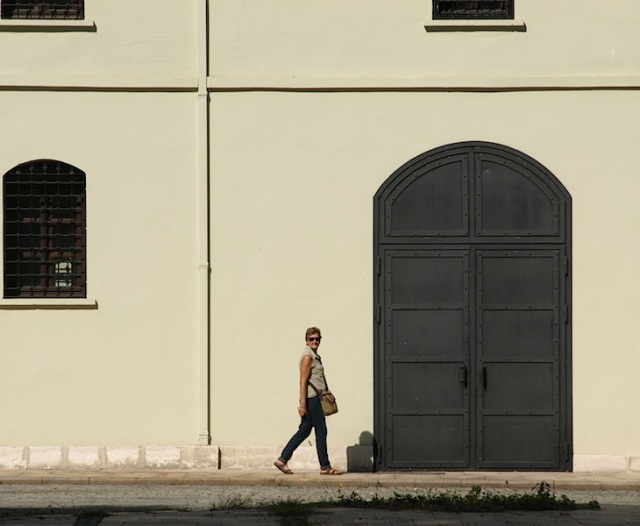 Along the city side of the park there is a museum of scientific technology. Unfortunately it is closed on Tuesday so it looks like a visit some other time.

Along the Topkapi side of the park restoration work was being carried out on one of the buildings. Instead of seeing the construction site an image of the building behind the screen was printed onto the protective shade cloth.

Tomorrow is our last day in Istanbul and we have decided to stay at home and get ready for the next leg of our odyssey into Greece.

Breakfast at the hotel comprises bread, tomatoes, cold meat, cheese, boiled eggs and even a Turkish version of cornflakes.  We sat in the courtyard and mulled over our stay in Istanbul and came to the conclusion that Istanbul is without doubt our favourite Asian/European city because it has many modern facilities but is still ‘rough on the corners’.

Because we are staying put today we have decided to share a few images of Istanbul not included in the blog writings. Hope you enjoy them. 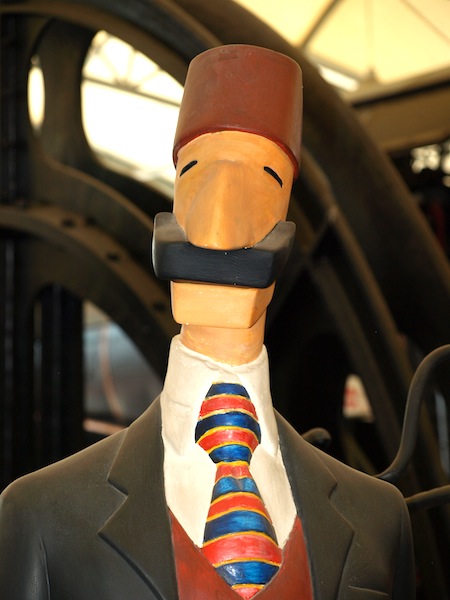 These pens were in a calligrapher’s shop window.  Unfortunately I never got around to buying one but I have the idea now so I will be able to make one when I get my hands on some bamboo.

I can’t comprehend how artists even set about painting such a huge scene.  I think there are still some  Michaelangelos about.  This photograph was taken from a taxi.

The player spun the coin with a finger and it came up either heads or tails. 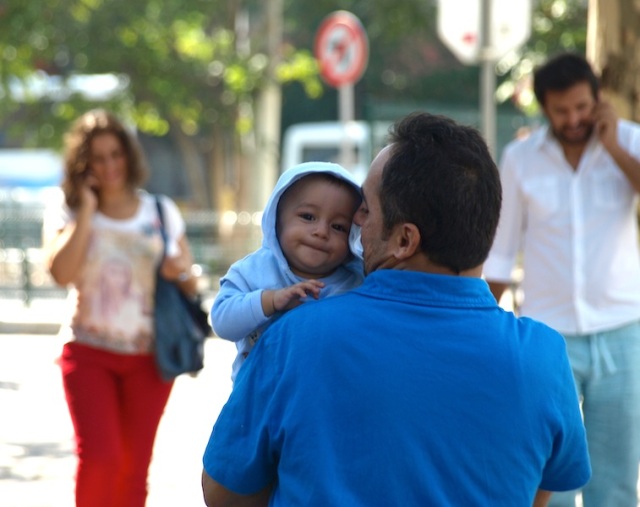 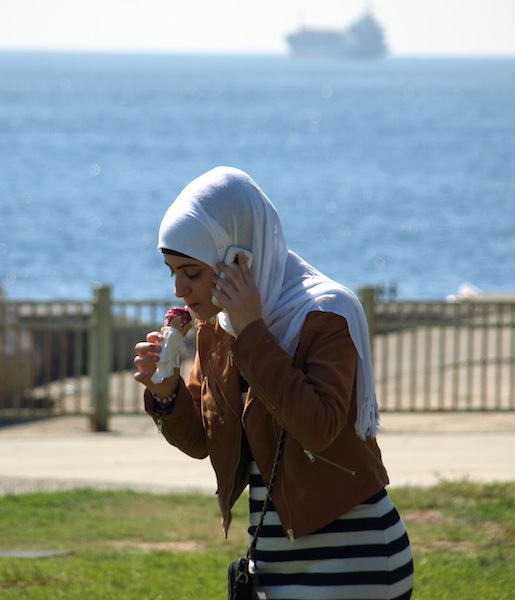 Food and mobile phones is where the money is

There are a couple of points to note with regards the previous four images and that is the photographs were taken from about 25 metres away from the subjects.  And in the previous two photographs note that of the four people, three are on mobile phones.  In 2010 there were six billion mobile phones in use globally. This doesn’t mean six billion people owned phones. Some people have two or three and they use the one that offers the best rate on a given day.  Amazingly though, people who have an income of only two dollars a day own phones even though they are starving and do not have access to clean water.  China and India have the most and Africa the least.

I’m not sure what the logs at the top of the wall on the right hand side were for, maybe simulating roof joists.

I saw a heap of cobblestones like these here ready for placement and I couldn’t work out how each stone was made.  Would like to get into a cobblestone factory. 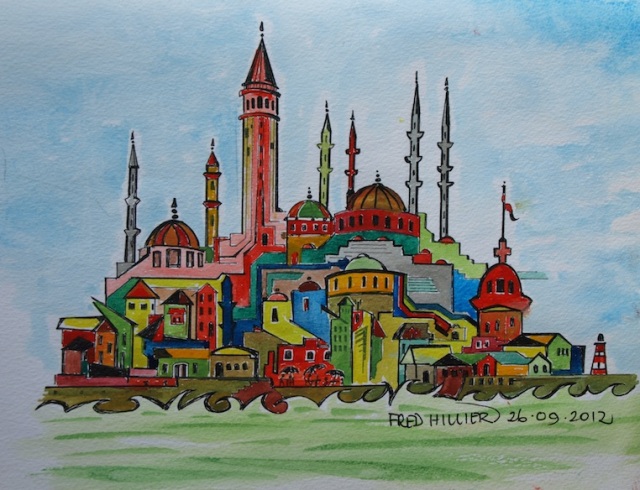