Today we drove to Cape Kipos, the most accessible easterly point on Samothraki.

The road runs parallel to the shoreline but sufficiently elevated to give some dramatic views up and down the coast.  One of the few places it touches the shore is near the Tower of Fonias, built in 1457 by the Genoese family of Gateluzzi using a mixture of basalt, limestone and marble.   The tower was used as a lookout post in case foreigners decided to invade. 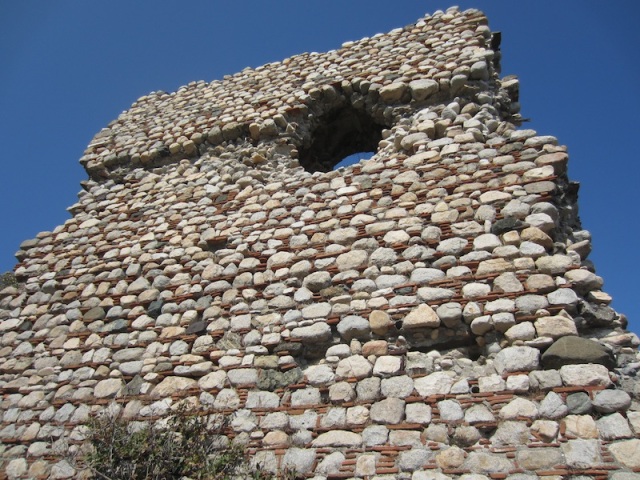 East facing wall of the tower.

I would describe the wall construction method as random rubble in course with terracotta locking plates. Look closely at the size of some of the boulders used in the wall.  I bet there were many a crushed finger and even fatalities during its construction. 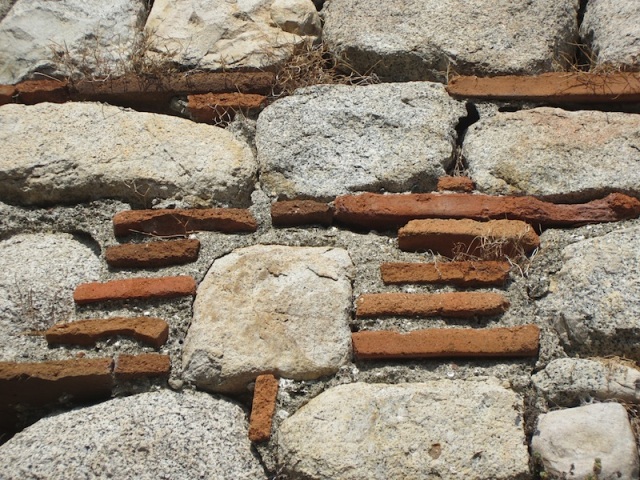 Locking plate detail. The terracotta locking plates extended about 300mm into the wall.

Standing a little way off the tower I tried to image the workers on flimsy scaffolding passing rocks from a stockpile at ground level up to the master rock layer on high.  The method of building here is fascinating. Because round stones do not have the locking ability of squared stone and the use of too much mortar weakens a wall, the builders used small plates of fired terracotta clay to do the locking and reduce the quantity of mortar used. 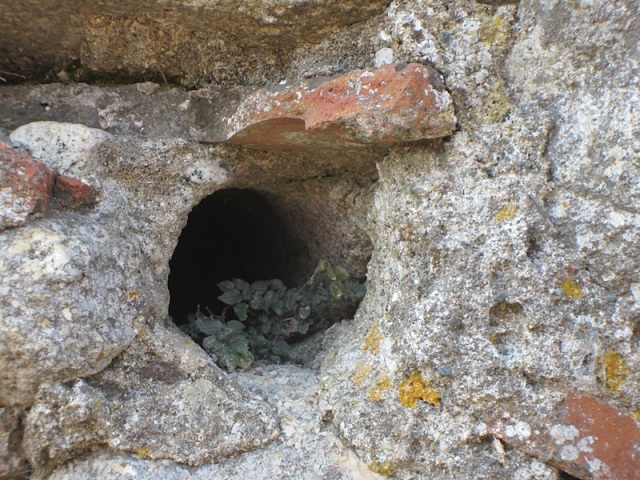 I think this was probably the garderobe outlet at the base of the tower.

A garderobe was the term for the lavatory in a medieval castle.   The robe part in the word relates to having to take your robe off before doing what you had to do.  Garderobe outlets had to be sealed at the input end as one ploy of invading armies was to inject bees into the outlet which would invade the tower or castle and make it uncomfortable for the inhabitants.

A beautiful curved marble lintel above a window high in the tower.

Don’t you just wonder who stood at the window and gazed out over the azure sea.  There were no doorways or openings at ground level which meant the tower was more secure.

After the tower visit we pressed on east.  It was good motoring until I decided to take a sidetrack uphill. I soon realised when the wheels began to spin on the loose gravelly surface that I wasn’t in a Landcruiser.  Even so, I had to go on until I found a flat spot to turn around.

The view from the turn around spot.

Going back down was scary as the little car’s first gear wasn’t very low so I had to ride the brakes and at one stage they began to fade so I used the handbrake, which wasn’t entirely satisfactory as the wheels locked up and the car proceeded to slide down hill.  The only alternative was to stop every now and then and let the brakes cool off and then proceed.

Fortunately we made it to the main road without mishap but I did decided not to take the little car off the bitumen again.

Back on the bitumen.

The end of the road at Kipos Beach. 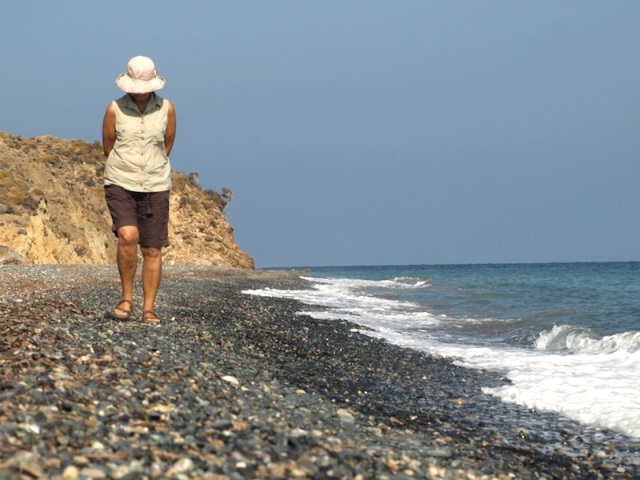 As I mentioned previously, Greece wouldn’t be Greece without cats, geraniums and whitewashed walls but after today I have to add goats. The hinterland behind Kipos beach was goat country and it was as bare as bare could be.  Goats had stripped the country and at one spot I actually saw goats pawing at the ground to exposed shrub roots. 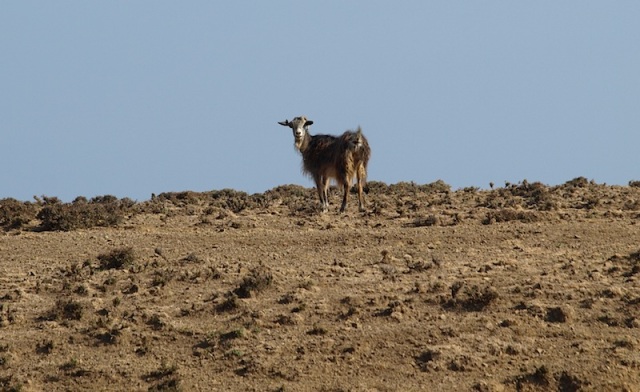 Look at this country. It wouldn’t feed a rabbit.

This sign suggests that you do not park your car under trees as the goats will climb on top to reach tree branches.

On the way back to Therma near Fonias Tower was a river by the same name.  It looked so inviting we walked up it for about two kilometres into the mountains where it turned into a Tolkien forest with Orc-like trees.  The predominant species was the Oriental plane tree, similar to the London plane tree, which most readers would know as they are the most widely planted street tree in the world. 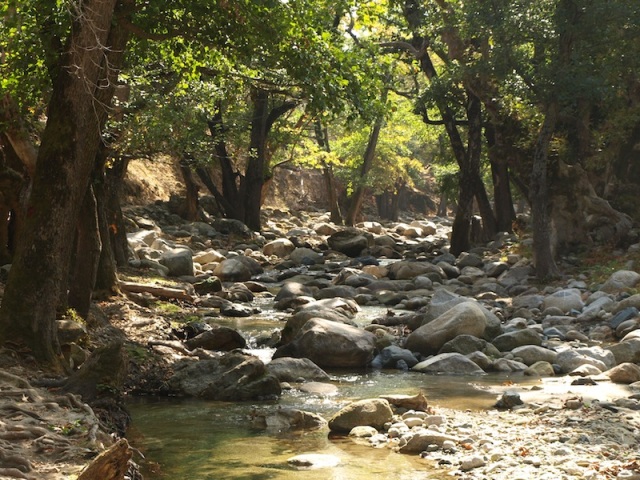 It’s along rivers and creeks like these that the hippies set up camp and become enlightened.

There is hardly a straight tree on Samothraki. They are all leaning, gnarled or twisted.

There were some dark tree root caverns that T Bear was too scared to venture into.

At a remote location in the Tolkien forest I found a rock with a 30mm diameter bore hole in it. It is a mystery as to its origin.

A delicate flower in the dry vegetation. 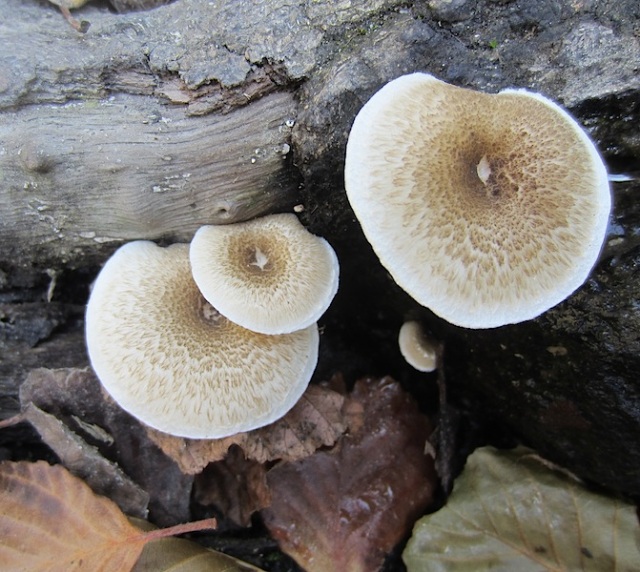 A Dutch family heading into the Tolkien forest.

After the river jaunt we needed a feed. The little fish is a local specialty called Barra! 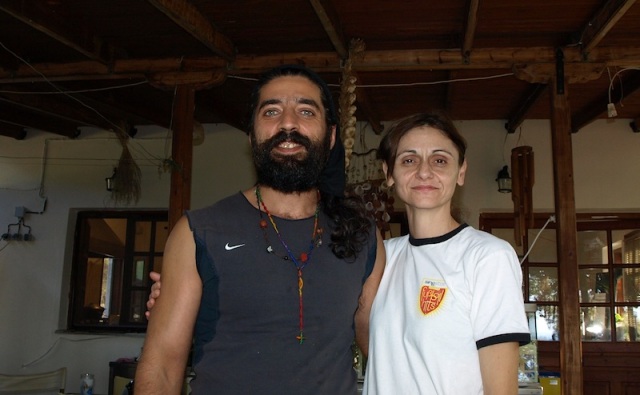 The end of another wonderful day on Samothraki.

Satchmo sang ‘What a wonderful World’ and we saw part of that wonderful world today.

This blog was posted in Vlore Albania on the 19th October 2012. We are slowly catching up.  Don’t forget to post a comment.