Posted on November 9, 2012 by tbeartravels 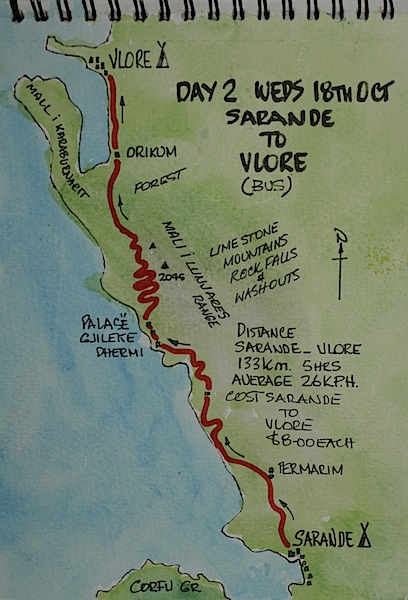 The hotel manager’s father took us by car to the bus pickup point.  From Sarande to Vlore is 133 kilometres and we were told the journey would take from five to six hours.  I thought the bus must pick up and set down passengers along the way and that was why it was to take so long.  It turned out the road crossed an alpine mountain range and that was why the journey took so long.

Whilst waiting for the bus to depart we people watched.   Following are a few candid shots. 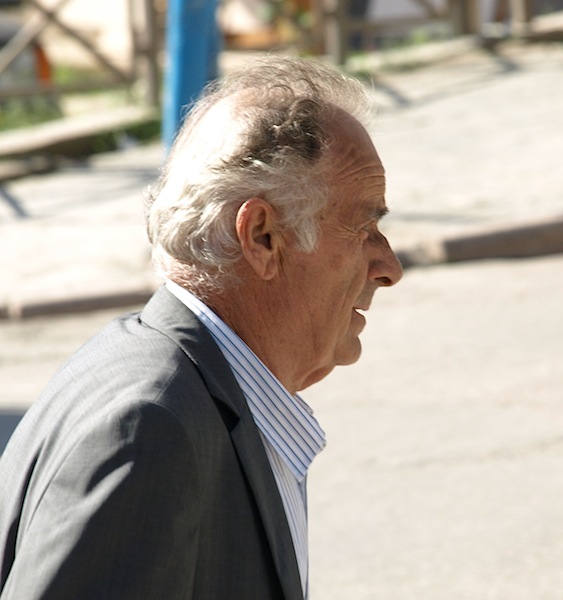 It’s frustrating not to be able to converse with the likes of these people.

The bus seated twenty and by day’s end, after crossing the mountains, I understood why only small buses undertake the journey. Seeing my camera the driver directed us to the front seat, he knew I would be wanting to take photographs. 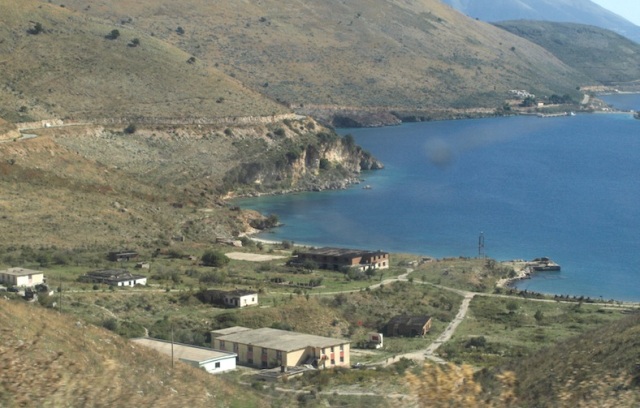 The coastal road at the start of the Sarande to Vlore journey.

Serious rock falls reduced the road to one lane.

The first challenge for the day.

We came from down there.

For most parts of the journey today the driver left the door open, which was good for photography. The only time he closed it was when the road was narrow and there was a chance of the door clipping a wall or tree.  Can you imagine a driver doing this in a more regulated country!

Near the highest point.

At the summit we stopped for lunch at a café.  The problem is when you don’t know the local lingo you don’t know how long the stop is for, all you can do is follow the leader.  The driver of the bus today was a young bloke and we had total confidence in his driving ability.  We would liked to have known how many days a week he did the drive and if he returned to Sarande after he dropped us off in Vlore.  As we alighted I gave him a tip, something not normally done.

Lunch stop at the summit. 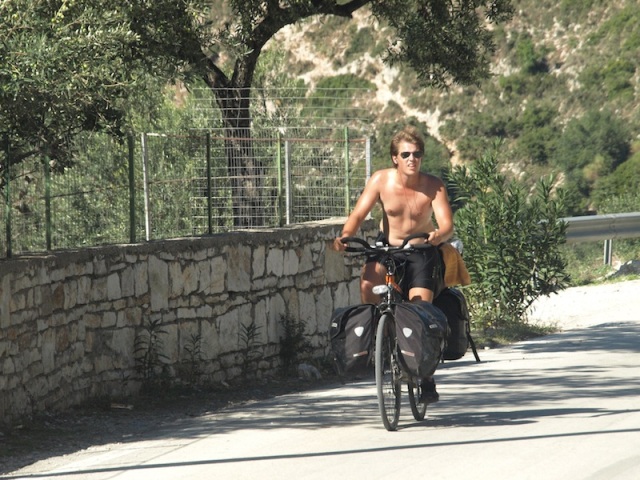 A very keen dude riding up and over. I wondered if he knew what lay ahead. 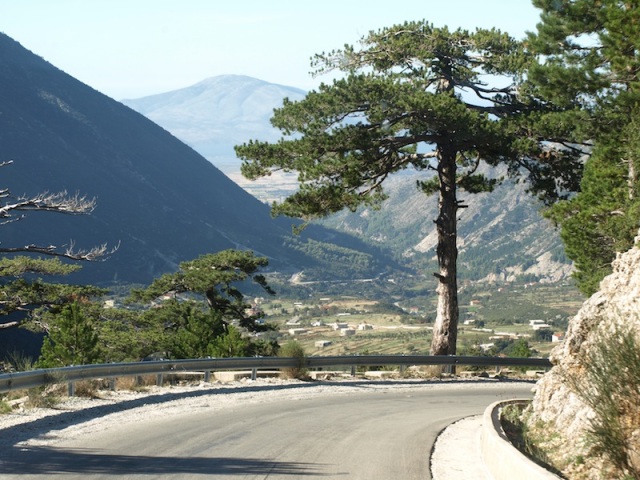 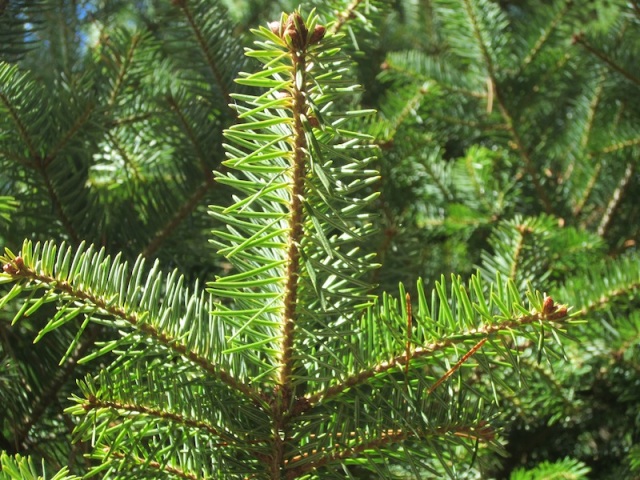 As of yet we have not been able to identify the trees the locals call Flag pines. When we first saw them we thought they looked similar to Aleppo pine. David our botanist friend may be able to help us with this one.

The road was so narrow through one mountain village today it actually had a traffic light to guide drivers through.

This is the reason for the traffic light. The driver closed the door of the bus when going through this village.

Little boxes on the hillside. They were not made of ticky tacky even though they all looked just the same.

Following are few oddities on the roadside between Sarande and Vlore.

A mine shaft or maybe the start of a tunnel?

Sinister looking graffiti on the side of an abandoned building.

Near this image there were a lot of abandoned military buildings including a submarine base cut into the side of the mountain at sea level.  Next time we do this journey, and I’m sure we will, we will do it by car and therefore be able to stop and explore at will.

People often ask of all the countries we have visited which one, do we like the most.  This is of course a hard question to answer as we enjoy the moment wherever we are. All I can say is the countries we are revisiting on this odyssey such as Thailand, Turkey and Greece have drawn us back.  We can now add Albania to the ‘must revisit’ list.

The owner of this house must be worried about an invasion.  Or maybe he wants to make his home literally his castle. Very professional brick work in the circular tower.

Arrived Vlore late afternoon. The bus dropped us on the side of the road and because there is a distinct shortage of tourist maps in Albania we had no idea where we were.   Bev sat at a cafe and I went hotel hunting.  I found one nearby and to our surprise the owner and his family were overwhelmed that we wanted to stay.  I don’t think many travellers like us stay at their establishment. They put us in the best room and its main feature was the light. 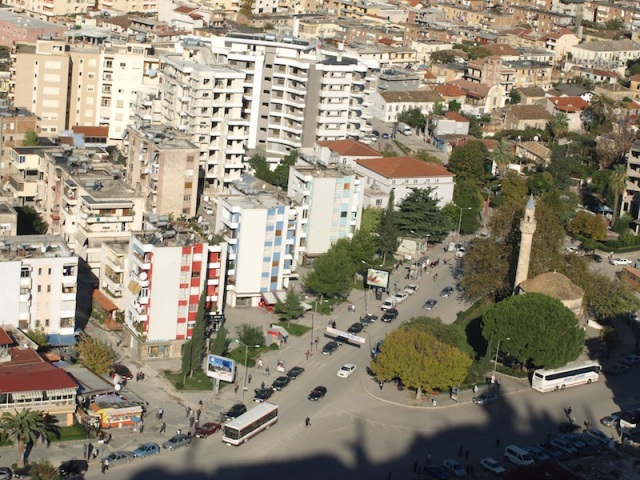 The bus drop off point was near the palm at the bottom left corner of the photograph. 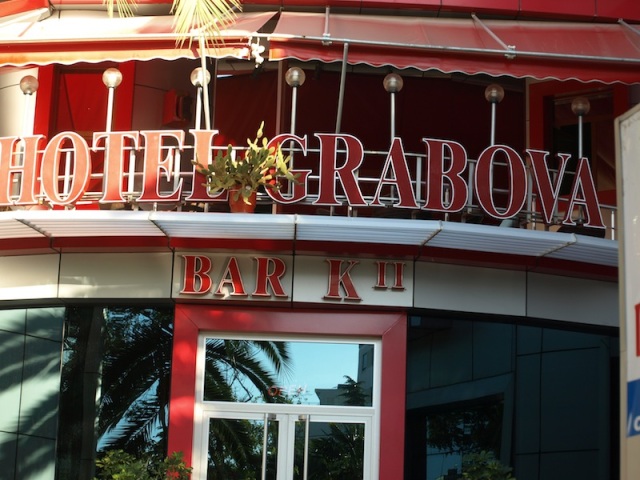 Hotel Grabova with a K11 bar.

The above photograph was a quick random shot, which was not intended to go in the blog.  I took the photograph so if we got lost it could be called up and shown to people with the intention of getting directions back to the hotel.

Reading by the amazing incredible light was difficult as the ornate sphere rotated and cast an ever-changing light beam across the page.  Many of the hotels we have stayed in so far have no bed lamps and if they do they are dull ornate affairs meant for looks not function.  As soon as the opportunity arises I’m going to buy a plug, socket, globe and a length of wire and make our own portable bed lamp.  Also I need a decent light when doing my art work.

With a light like that all we could do was go to sleep.

Behind the hotel there is a high feature so I decided to go up and get a look down as having no map I need to orientate myself.  Bev was mucking about sorting out washing so I went on my own.  I didn’t go to the top because the walk up was more than just interesting so returned to get Bev as I wanted her to share the experience with me.

The pathway from the main road started as a set of wide marble steps leading to a statue of Dede Ahmet Myftar Ahmataj.  Now I expect 99.99% of readers are saying who cares but I do because I discovered him and not only did I discover him but I learned as a consequence a lot about another religion of the world, Bektashism.

The bronze statue of D.A.M.A.

The bronze statue was a beautiful piece of sculpture but unfortunately the surrounding area didn’t do him justice.  Whilst I was admiring D.A.M.A one bloke came, kissed his hand and touched Dede’s foot and a woman lit a candle at the statue’s feet.

Seeing candles at what appeared to be a statue of a Muslim got me to thinking: was he a Muslim or a Christian.  We learned more at the top of the mountain because there was a mausoleum in which the remains of another Bektashi were entombed.  There were, quite a number of affluent young people (30s+) lighting candles, kneeling at his tomb, praying and touching his headstone.

The mystery relating to Bektashism was revealed when I searched the net and the more I delved the more interesting it became.  I found out:

So there you have it. 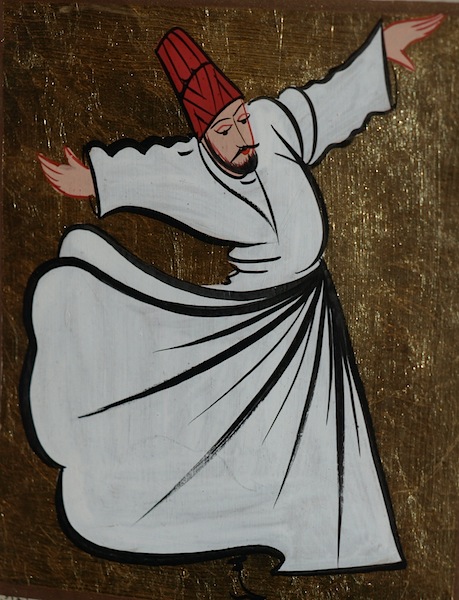 The track to the mausoleum.

Suddenly the path turned to this.

And back to this.

A view of Vlore from the top.  Look at the number of solar panel storage tanks on the roof tops!

The buildings in the above image may look mono specific but in this conglomeration there are a lot of sub species.  The following four images show what I mean.

Ornate. A past era.

If you built without approval the army came and pulled your shop or house down.

From the mausoleum we walked down and headed east towards the sea. On the way as usual we found some treasures.

A wonderful fence and gate.

A workman putting the finishing touches to another column.

This is no photographic masterpiece but it is ingenious.  Rather than concrete the post into the ground the large diameter steel pipe section was set in the concrete path then the pole placed in it and wooden wedges driven in to hold the pole vertical after the path concrete was set.  Then a sand cement mixture was poured into the cavity.  Not really very aesthetic but practical.

The silver Mercedes I had a close encounter with.

I took these photographs to show how rough some of the roads are in Albania. After I took the latter photo the driver mounted the footpath to avoid the potholes and hit me, fortunately, only with the rear vision mirror. The encounter did more damage to the mirror than to me.  I spoke to a local about the incident and was told the driver was probably unlicensed so that’s why he didn’t stop.

During Hoxha’s reign there were only six hundred cars in Albania and they belonged to Communist Party members.  When Albania was freed from his dictatorship, ordinary people bought cars and for some time they drove unlicensed and unregistered vehicles.  It was Rafferty’s rules.  For our overseas readers, Rafferty was a lanky laconic actor renowned for his rough and ready attitudes to life.

Hard going for pedestrians all around.

It’s hard going for bike riders too, especially when your brother gives you a clip around the ears.

The car here has been towed away for parking illegally.  It was not taken to a secure depot area waiting for the owner to claim it. The tow truck driver took it to his base and let the car tyres down.  The owner would need to pay the tow truck driver a fee then pump up the tyres to be able to drive his car away.

Late in the afternoon we found a café with a good Internet connection.  The owner spoke very good English because he and his family had been living in London but returned to Vlore for the climate; his young son suffered from asthma in London but not in Vlore.  We talked a lot to Minella and his wife Jonida and learned more about Albania than we would have by reading or searching the net.

No dramatic scenery today.  It was a rest day for us and a chance to understand what makes Albania tick.  We did try to get to the seaside but a security guard hunted us, I think because we were too close to some moored naval vessels.