Today we decided to search for the location where the photographs shown in my 1972 diary were taken from.  I showed the photographs to Cico, thinking a fireman would know the building layout in the town but he wasn’t too sure so he asked his wife and she knew immediately.  Apparently she used to play in the derelict building when a child, she even knew the plant in the photograph because she managed to get spiked by it many times. Mirela said we would no longer be able to stand in the same place where our original photographs were taken as the building has been restored and is locked up for the winter. 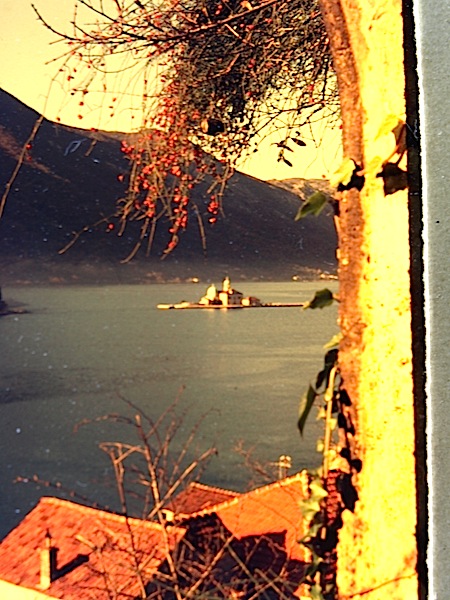 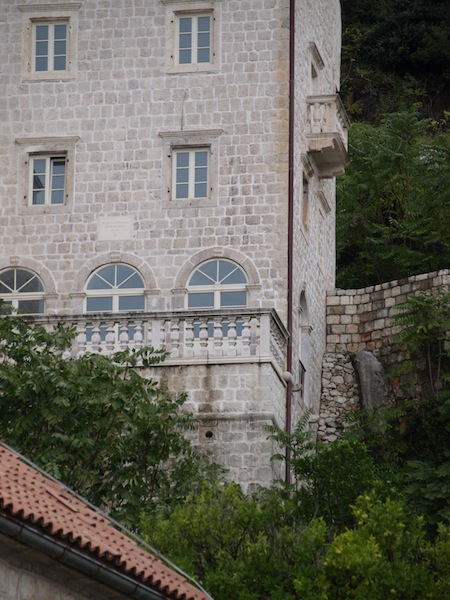 The 1972 photograph was taken from the inside looking out through the middle arched doorway/window opening onto the balcony.

There is no mistaking the handrail.

The view down the hallway.

Now the house has been restored the view down the hallway would look very different. If I could contact the owner of the restored house I would refer him to our blog and ask for photographs of the restoration work.

The restored ruins from where we took photographs in 1972.

The front yard of the restored house.

Unfortunately there was no one home when we visited today.  Mirela told us a wealthy tour promoter from the nearby tourist town of Budva now owns the house.  The house is valued at one million Euros.

Feeling happy that we had found the old building from our 1972 journey we moved further up towards the main road above the town. On the way up we found a few treasures. 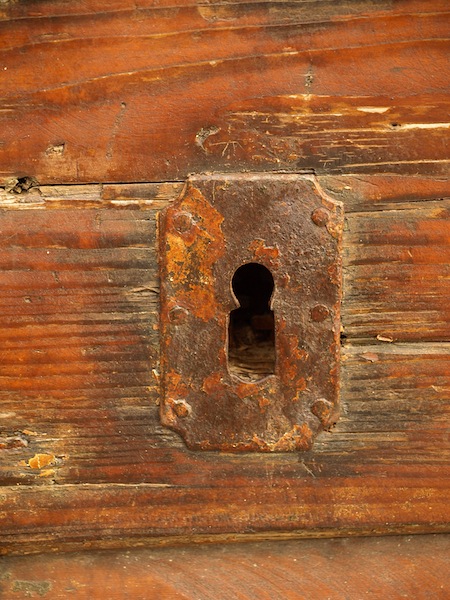 A very rusty and artistic keyhole.

T Bear on a window shutter. The shutter is made from an old fuel stove door.

After a very satisfying day we returned to our apartment, cooked dinner and reminisced about our days in Perast in 1972.  One significant thing remembered were two English words on local radio and they were Whitlam and Labour.  We knew then that the Labour party lead by Gough Whitlam had won office in Australia.

This morning we did some more exploring of the town and ended up high above the town on the road where the bus dropped us on Thursday.  Across the road I spotted an overgrown set of steps leading up to an old wall and of course I had to go and investigate.  The track took some negotiation as it was overgrown with blackberry bushes.

Reaching the top we realised we had discovered an old fortress.

View from the fortress wall. 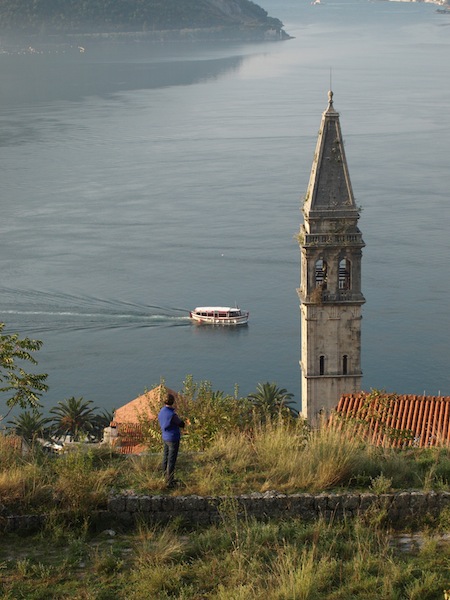 View east over the Bay of Kotor. 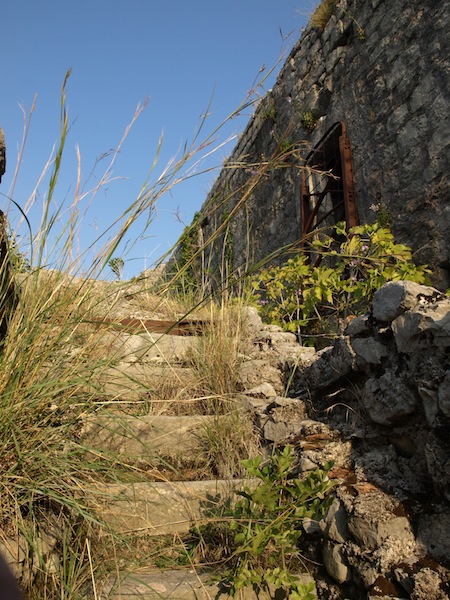 The rusty steel gate is a modern drawbridge. Behind the drawbridge there were rooms. 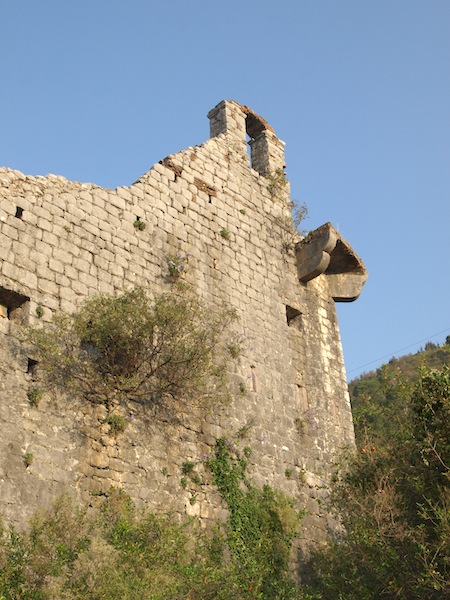 Part of the defence wall.

I guessed these steel straps were to hold the flagpole.  My guess was proved right when we found an old drawing in the Perast museum showing the fortress with flag flying. 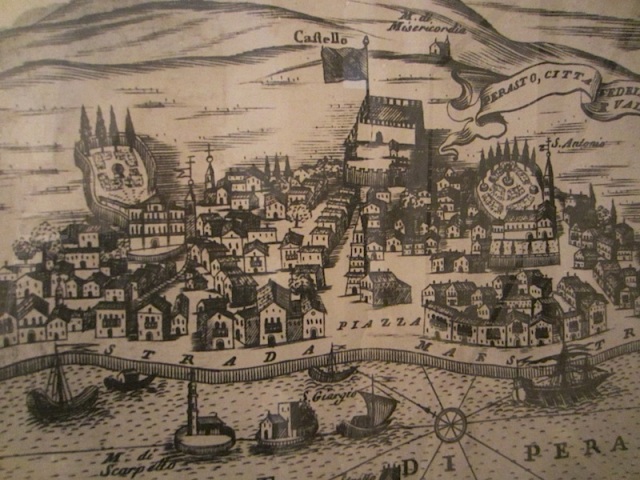 Flag flying from top left corner of the fortress. 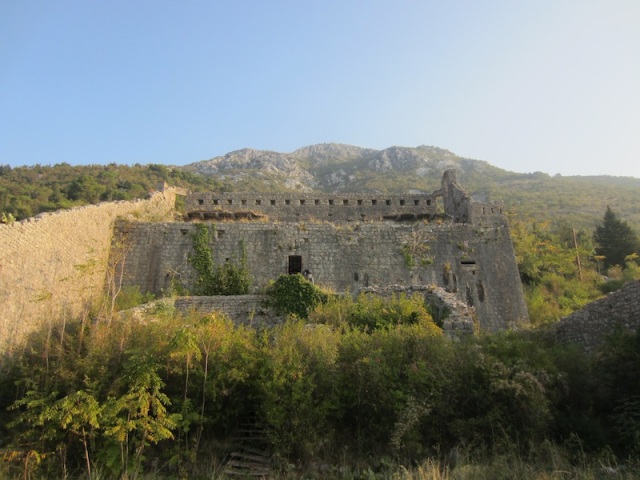 East wall of the fortress.

The flagpole stood at the top left corner.  The projections above my head on the left extended out to a wall (long gone) where Bev was standing to take this photograph.  Note the number of loopholes in the wall above roof level.  After we explored the inside of the fortress we went around the back and found the water supply and an old road reportedly to have been Roman.

Various armies manned the fortress over the centuries.  Serbians and Venetians came and went and during Napoleon’s rule it was occupied by French troops who departed in 1813. From 1814 to 1895 the fort was under Austrian rule and at that time it was emptied of cannons and other equipment. Can you image the pushing, shoving and grunting that would have gone on as the soldiers dismantled the cannons and loaded them onto ships to take them away.  People were living in the fortress up until 1911.

In 2002 plans were drawn up to rebuild the fortress but it seems the rebuild has stalled.  Somehow I prefer it the way it is now, with an overgrown path and, with a battle through blackberry bushes, you feel you have discovered something. If it’s restored it will become just another tourist attraction and there are enough of them. 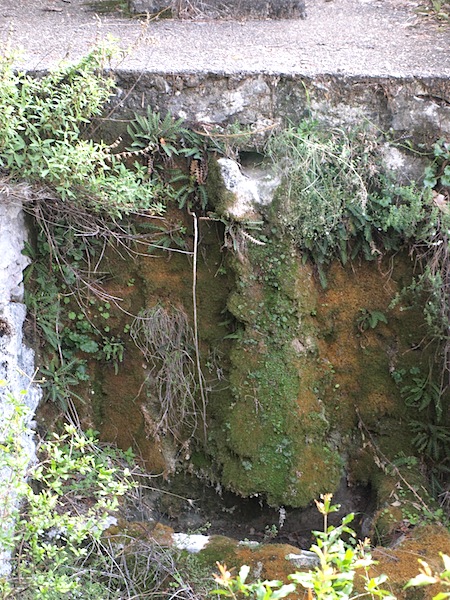 The spring (not running) which supplied water to the fortress.

Perast is one of those locations where around every corner and up every passage way there is a view or something to see.   Following are some of our discoveries and views.

Window shutters in need of repair. How long ago were they hung?

South wall of the museum.

The railing here is called a balustrade and the vertical component is the baluster. 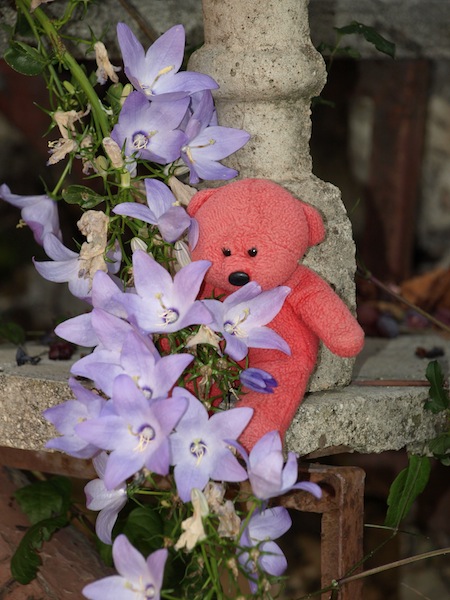 As soon as I saw this handrail I thought of our friend Johannes at Pilliga Pottery. He  is always forging steel and I know he would appreciate the design and the work in making this handrail. 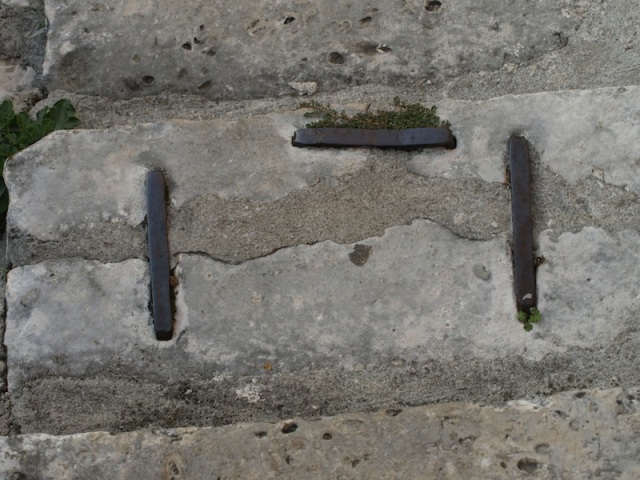 This photograph is taken looking down on a step.  The step has broken in three and the steel tiepins were inserted to keep the broken section in position. Installing the pins was no easy task; holes had to be chiselled into the step then the pins inserted.   Molten lead was poured into the holes to secure the pins in position. 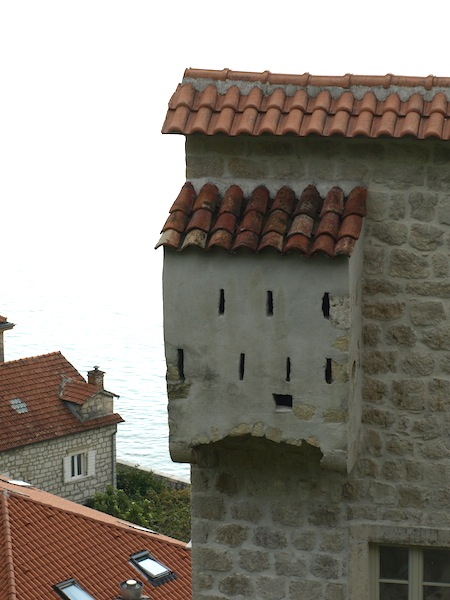 A garderobe (old name for wardrobe) was the toilet.  The garderobe was where you took your robes off and hung them when going to the loo. The projection housed a stone seat where the occupant sat and the contributions went straight down the wall into a compost heap at ground level.  No doubt going to the loo was a posterior chilling experience.  One garderobe we found on a castle in England was located just to the side of the front door.  Not a very nice welcome for visitors. This outshot is at the back of the house that has been restored since our 1972 visit. 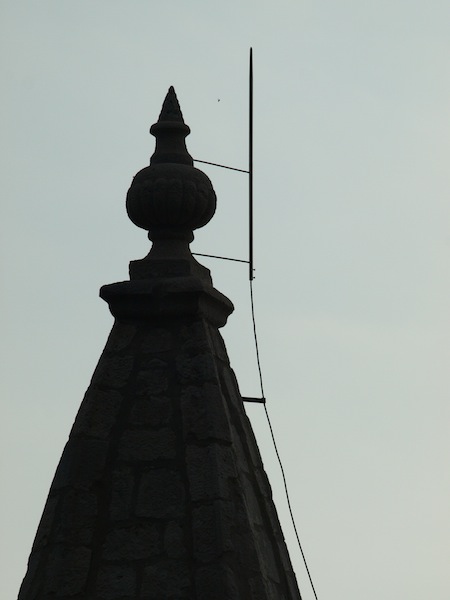 In the Perast region the locals are very serious about lighting conductors.  Some buildings have them running along the ridgeline and every church spire or mosque minaret has one.

Just the same, having a lightning conductor doesn’t necessarily mean protection.  For example, in 1984 the South Transept roof of York Minster suddenly burst into flames and was totally destroyed. This was a strange event because although the “official explanation” has always been that a bolt of lightning caused it, the sky happened to be completely clear that night and nobody heard any thunder, even though some eye witnesses spoke about a strange “sword-like stab of fire” reaching down from a “rugby-ball shaped orange object” above the Minster.  The Cathedral’s roof was fully wired with lightning rods, which for some reason didn’t work. In addition there were smoke detectors in the ceiling which had been tested just a month before.  The whole event may be considered an inexplicable mystery.

Grape vines being trained up and over the wall.

After returning to the apartment I got busy squeezing grapes.  I also helped Cico and Mirela shift a couple of tonnes of firewood. Giving them a hand not only meant getting something done but it meant we could have a yarn and learn more about the region and where Montenegro is heading. 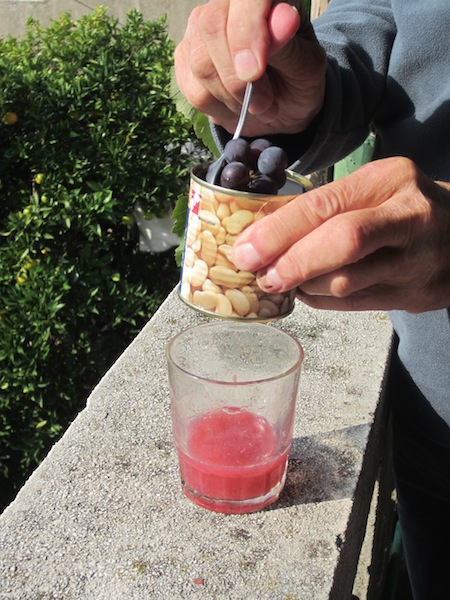 I punched holes in the bottom of the can (not the same one the cat was cleaning) and squashed the grapes with a fork.

Great day poking about.  Tomorrow might not be so as rain is forecast.