Popped over to Venice for the day!

I’m adamant to start the day with a negative comment but the breakfast waitress in the hotel dining room was a surly individual.  I asked for hot water for the thermos and she was very short and unhelpful in her reply.  I thought immediately of how friendly Thai waiters were when we passed through earlier in our odyssey.

Today en route to Venice a pregnant beggar handed us a card requesting us to consider making a donation to her cause.  From the way she was acting it was obvious she was on the train without a ticket as she was keeping a fearful eye out for the conductor and the railway police.  I wondered if the bump out front was real or padding.  Showing signs of pregnancy would affect more sympathy!

This is organised begging.

Misty morning on the Venice estuary.

Freight delivery on the Grand Canal.

I watched the gondolier manoeuvre his craft through a narrow waterway.  It requires a lot of skill, especially when motorised boats are pushing their way through as well. 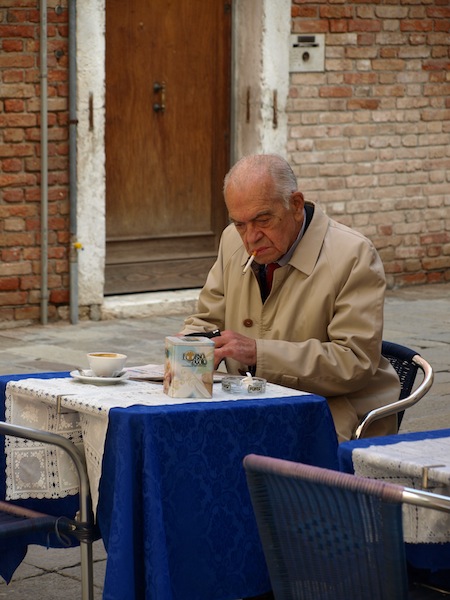 Early morning ritual….coffee and a cigarette.

Another early morning ritual….studying the stock market with the sun on your back.

The feeling I got when listening to this opera singing busker was that he was singing for the love of performing, not the money. 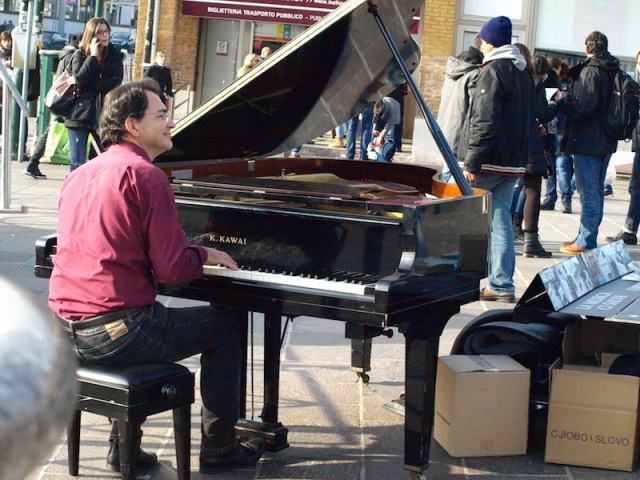 Near the Venice railway station there was this very serious busker. First time we have seen a busker on a grand piano. 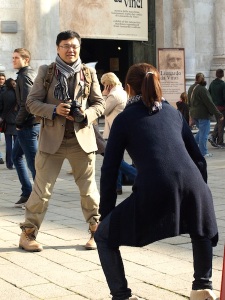 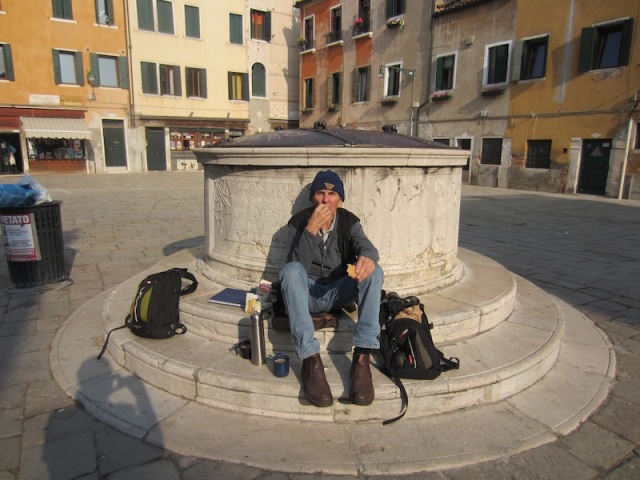 Uncouth tourist. Bev and I were the only people in Venice doing their own morning tea.

DOORS AND WINDOWS OF VENICE.

I have no idea why the pedestal lamp is sitting in the doorway. Ancient door though. 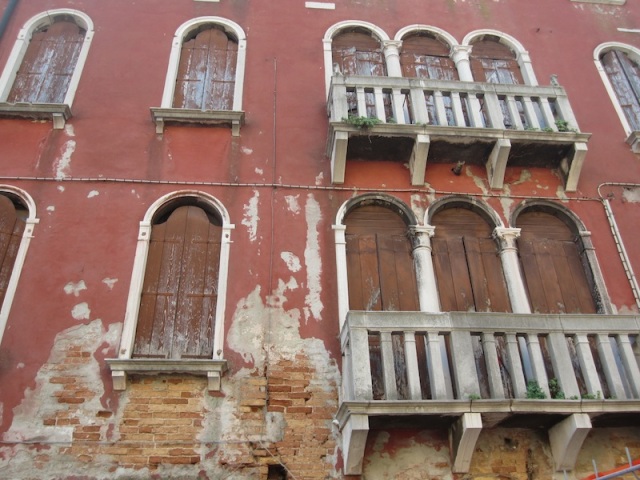 There will always be work for brickies, stonemasons and restorers in Venice.

Same story as Rijeka,  stucco falling off due to moisture penetration. 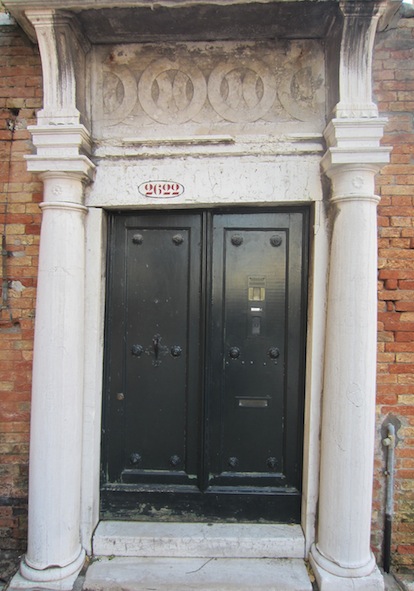 This doorway was in a building that was slipping sideways into the nearby canal.  Consequently the door openings were going from rectangular to parallelogram shape.  I would like to know what technology is going to be employed to arrest the building from slipping further sideways. 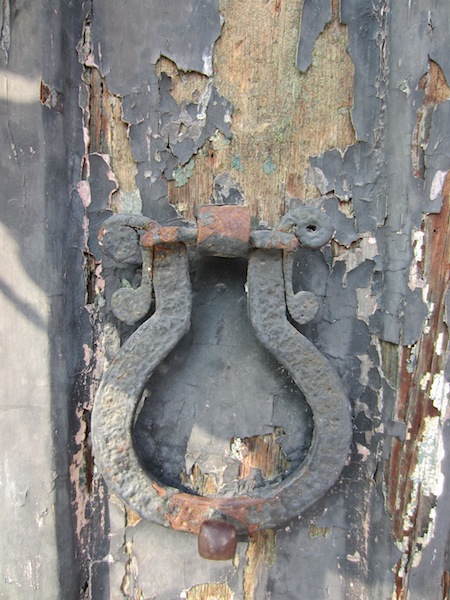 Of all door furniture, knockers give the metalwork artist the most scope to be creative.  The ring section is called a bob (a weight as in plumb bob).  Knockers come in all shapes and sizes. Originally, doorknockers were signage for a home and they indicated one’s profession.

Even if you are not interested in doorknockers go to the web page, ‘Bilder zu door knockers’. The knockers displayed on that page are absolutely amazing.  Make sure you put ‘door’ in the address otherwise you might get a surprise.

Door of many colours. How many coats, by how many people, how long ago?

I bet if the paint here was tested for lead content it would read positive. Having lead (Pb) in the vicinity of where one touches, such as on this door can be detrimental.  Research has proved without doubt that Beethoven died from lead poisoning. He didn’t go around licking doors like this one but probably ingested the lead from drinking wine from lead-based goblets. Goya’s ill-health and deafness were probably due to lead poisoning and it probably hastened his death.  It is believed lead poisoning led to Queen Elizabeth I’s death. She used lead-based makeup. US President Andrew Jackson suffered from a form of lead poisoning called plumbilism.   Also, historians believe that Julius Caesar’s successor, Augustus, may have been infertile due to lead poisoning.  Care is definitely needed if you make your own lead fishing sinkers.

I think lead whenever I see glazed ceramic mugs imported from China. I wonder whether the glazes used are lead based?

Readers know that way back in Greece I started photographing chimneys with attitude.  In Venice I found some more. 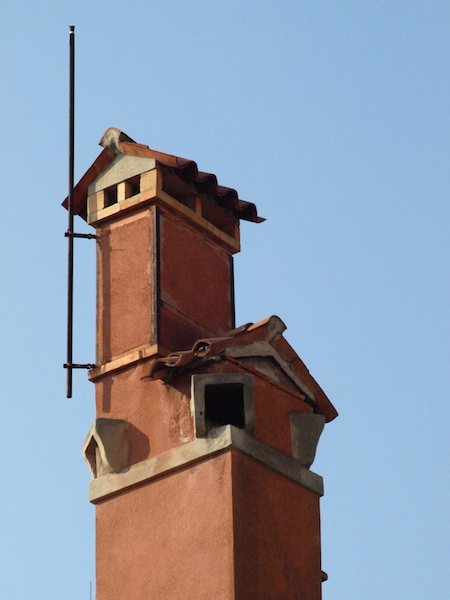 The hoods at the base of this chimney covered holes going through the chimney wall into the main chimney throat.  Air is supposedly drawn upwards through the holes, improving airflow.

In 1970 when Bev and I lived on a large estate in England one of my afternoon jobs was to set and light the open fires in the manor house.  This sounds easy enough but chimneys in this particular house smoked badly when the fires were first lit.  These problem chimneys inspired me to study chimney design.  I learned smoky chimneys have been a problem since ancient times.

The smoky chimney problem wasn’t solved until Count Rumford, an Anglo-American physicist, set to studying chimney design.  Rumford came up with the idea that fireplaces should be smaller and shallower.  He streamlined the throat too, or in his words, ‘rounded off the breast’ so as to ‘remove those local hindrances which forcibly prevent the smoke from following its natural tendency to go up the chimney’.   Rumford wrote two papers, one in 1796 and the second in 1798, detailing how to cure smoky fireplaces.  By the turn of the century ‘The Rumford Fireplace’ became state-of-the-art worldwide.

Count Rumford chimney. Shallow and no sharp corners for smoke to dwell in.

There is a humorous tale to tell about my experiences when looking for a Count Rumford chimney.  After learning about the Count’s chimney design, whenever I came across an old chimney I poked my head up to see if it conformed to his design.  One chimney I looked into was in Captain Cook’s cottage in Fitzroy Gardens Melbourne.

To view the chimney I had to go under a rope barrier, lay on my back and look up the chimney.  Whilst in this position a security guard came to see what I was doing. I said I was just looking to see if the chimney conformed to Count Rumford’s design.  After telling him about the Count he allowed me to continue my investigation.  For your information, Captain Cook’s cottage does not have a Count Rumford-designed chimney.

Cook’s cottage was constructed by his parents in 1755 in the English village of Great Ayton, North Yorkshire. In 1933 the owner of the cottage decided to sell it and accepted an Australian bid of £800. The cottage was deconstructed brick by brick and packed into 253 cases and 40 barrels, for shipping to Melbourne where it was reconstructed.

Cornishmen usually built round chimneys but I doubt if a Cornishman built this one.  I suppose the ornate top on this chimney could be called a crocket.  I would like to know if the crocket contributed to the chimney’s efficiency.

Cracked and deteriorating walls are a result of Venice sinking (on an average of 1 to 2 mm per year) brought about by the pumping of water from underground aquifers. This has lead to subsoil subsidence and also the Adriatic tectonic plate on which Venice sits is sliding downwards to the east.  Add rising sea levels as well and it means it is becoming increasingly uncomfortable for people living close to the water. I noticed today that in some areas people are not living on the ground floors. I looked into the lower level of a house today and all I can say is it was dark, damp and dank. 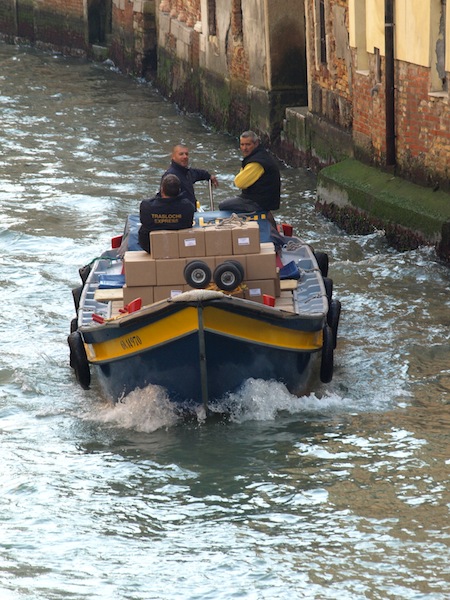 Wave action from a passing boat.

Add wave action to the equation as well and it’s obvious Venetians have a few watery problems to contend with.

Once the outside protective stucco falls off the wall the soft, poor quality bricks are exposed to the vagrancies of the weather.  I would be getting worried if I owned this house.

The steel wall tie here is to stop the cracked door jamb from collapsing.

Water level in times of high tide and flood would probably be at the gondolier’s waist.  That level would correspond with where the stucco has fallen off the opposite wall.

Flood door. The step of this doorway was about one and a half metres above sea level.

During the historic flood of 2008 water was a metre deep in some of the public squares.  I read that Venetians these days are said to have a rubber boot mentality. 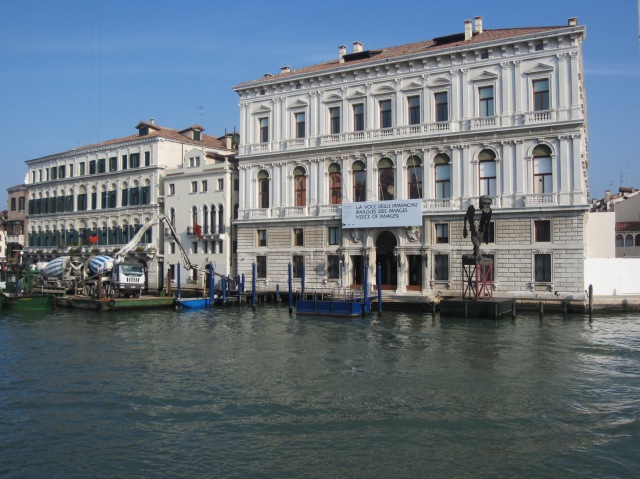 Above left you can see concrete pumps, injecting concrete into building foundations in an attempt to stabilise surrounding buildings.  The concrete trucks are on barges. Imagine the cost to undertake this operation. 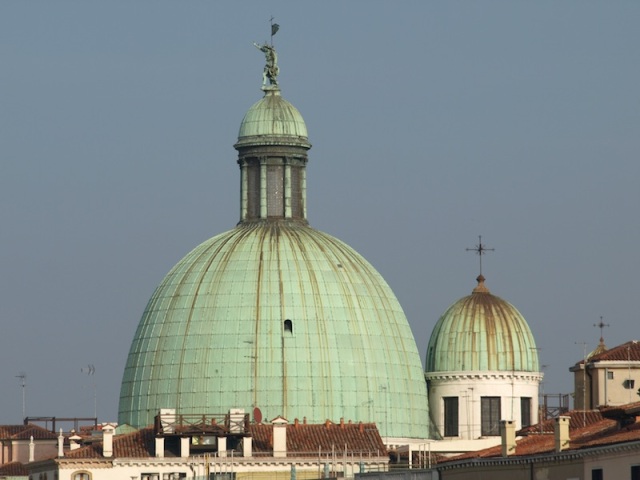 The domes of the Baroque church, Santa Maria della Salute.

The smaller dome has a definite list to the right.  Obviously there is going to be a lot of concrete pumped into its foundations so it doesn’t become the Leaning Tower of Venice.  The roofs of these domes are made from copper and the green colour is called verdigris, a natural patina formed on copper when exposed to air or seawater over a period of time.

Another leaning steeple. Something is out of vertical here, don’t you think?

The name Venice was derived from the ancient Veneti people who inhabited the region from the 10th century. Venice has been known as the Queen of the Adriatic, City of Water, Masks, Bridges, the Floating City, and the City of Canals.  Venice has also been described as  one of Europe’s most romantic cities and I have to admit when I think back to 1972 when we were last in Venice it had that sort of effect on us at the time.  I got very romantic with Bev today too. I took her to lunch. We sat on the canal steps and ate bread, tomato and cheese.  I thought about buying her a wine but we didn’t have sufficient euros as we forgot to change money yesterday and we couldn’t find a bank in Venice today.

Venice could also be known as the City of Glass. Some fine examples of Venetian glass.

Byzantine craftsmen played an important role in the development of Venetian glass. When Constantinople was sacked during the Fourth Crusade in 1204 some fleeing artisans came to Venice and continued their craft.

Our romantic lunch spot today. The most pleasing aspect about this spot was it was in full sun. Look at the wrought iron work above the door in the background. 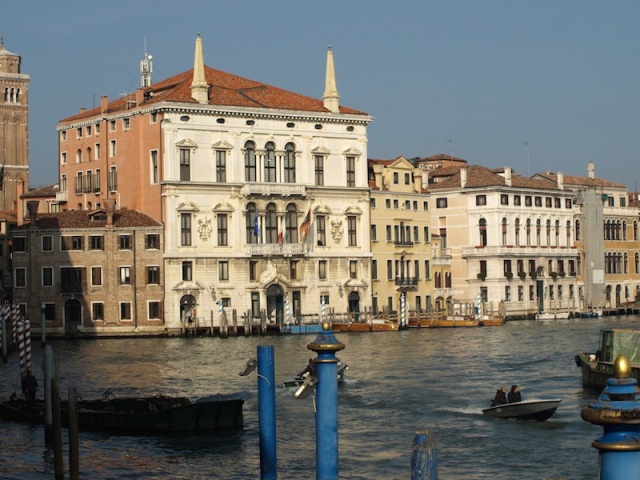 Venice is an amazingly watery place. We would love to have a one of our sea kayaks there, then we could explore every nook and cranny at will.  It might be hard to find a free campsite though.

Sunset from the train on the way back to Trieste.

Sunset from the train on the way back to Trieste.

Tonight we went searching for somewhere to eat, but in the part of town the hotel is located there are only big flash restaurants and smoke laden bars.  There are no el cheapo eating places, not even a hot dog stand.  So the only alternative was to go to the Spar supermarket where we bought cooked chicken, packet salad, tomatoes, carrots and bread. We dined on the bed in our hotel room.

Tomorrow we are on the train from Trieste to Munich Germany.

Note to readers: There has been a bit of a delay with this posting mainly due to unreliable internet connections.  If you have been going to your computer each day in the hope of  reading a fresh posting we are sorry to have disappointed you.  Remember Word Press will send you an email whenever there is a new posting.