Side trip to Augsburg, Bavaria

Posted on January 8, 2013 by tbeartravels

The trip to Augsburg by coach was organised by Austrian friends of Thomas.

Fortunately we had the whole day to look about so first we walked around the old town and then visited the Augsburger Puppenkiste (historic puppet museum) where the ins and outs of making children’s television puppet programs were explained.  The programs were the German equivalent for many European children to Australia’s Mr Squiggle and Playschool.

The old buildings of Augsburg were as interesting as in any city with a medieval history.

Crowstep gable. In days gone by it was a sign of good luck if crows sat on your roof so a few steps like these encouraged crows to come. 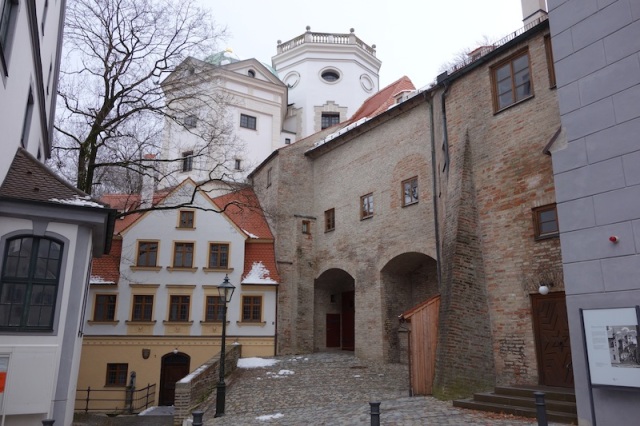 I do believe the two hexagonal towers here were originally water tanks. 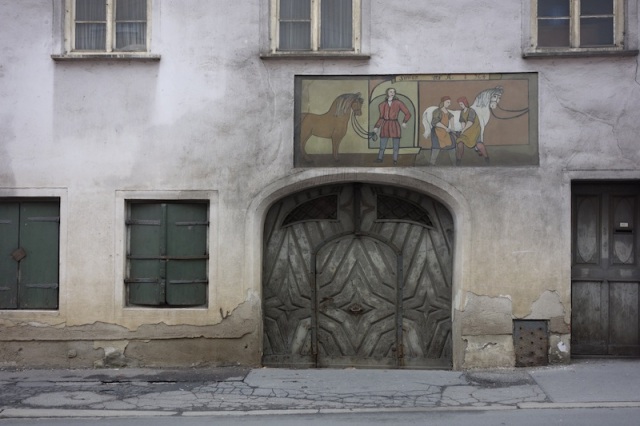 Blacksmith’s shop. Was there a blacksmith called Smith who was always dirty?

Near the Puppenkiste was the Abbey of St Ulrich and St Afra. The inside of the church was very impressive, equally as impressive as other well-known cathedrals in Europe.

A beautiful example of Gothic architecture. 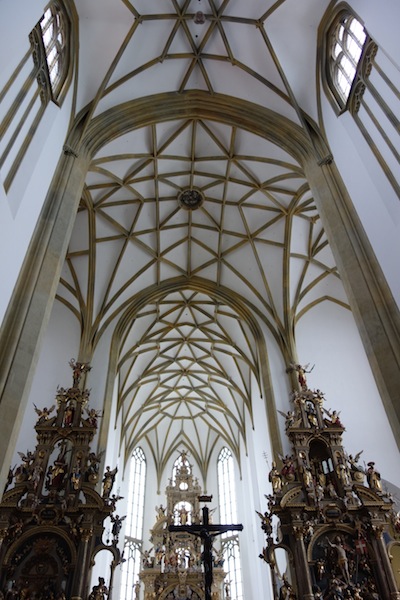 One aim of the Gothic style is to draw you upwards to heaven and you certainly feel the sensation when standing in this beautiful building. 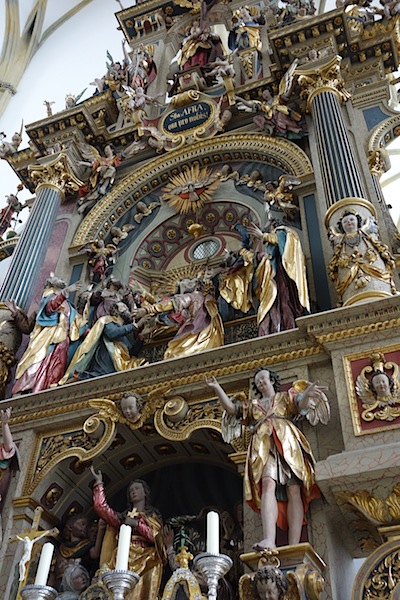 Thomas, the wood expert, assured me that this structure was made from wood. It was warm to the touch, not at all cold had it been made of stone. 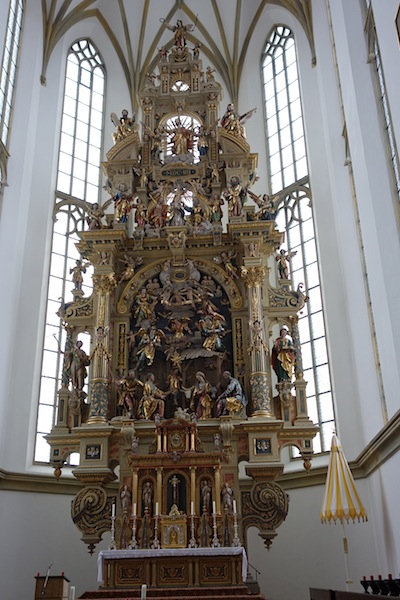 The high altar also made from wood.

The aim of those who commissioned the building of churches such as this was to imply that God was actually guiding the artisans and craftsmen in the construction of the building.   I can imagine when the locals saw the finished product they gasped and thought only God could create such a wonderful thing.

Almost every church has an organ but this one is special as Wolfgang  Amadeus Mozart played it.  Mozart visited Augsburg on a number of occasions between 1763 and 1790.   Augsburg, as he expressed it, was the  ‘hometown of my daddy’.  During his visits Wolfgang met relatives and old friends and on one occasion piano maker Johann Andreas Stein led him to the organ in the St Ulrich church.

The art glass window below the organ in the previous photograph. 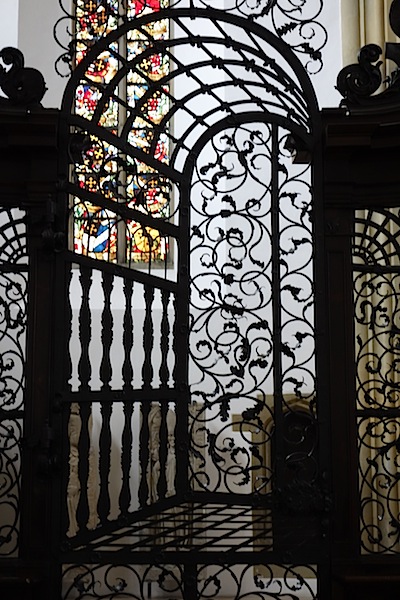 Beautiful ironwork at the entrance to the clerestory. A clerestory is a set of high windows with the purpose of bringing light into the inner space of the church.

The interior photographs of the church were taken under extremely low light conditions using a Sony RX100 digital camera.

It was freezing on the day we visited Augsburg. The temperature didn’t get above minus three degrees so every opportunity we had to get in out of the cold we seized the moment and one such refuge from the cold was to get inside another church, the Augsburg Cathedral (Dom).  Unfortunately for us, there was a wedding happening so we couldn’t get any interior photographs but fortunately there had been a lot of candle lighting so we took the opportunity to warm up.

Even the Swiss who are used to the cold took the opportunity to get warm. 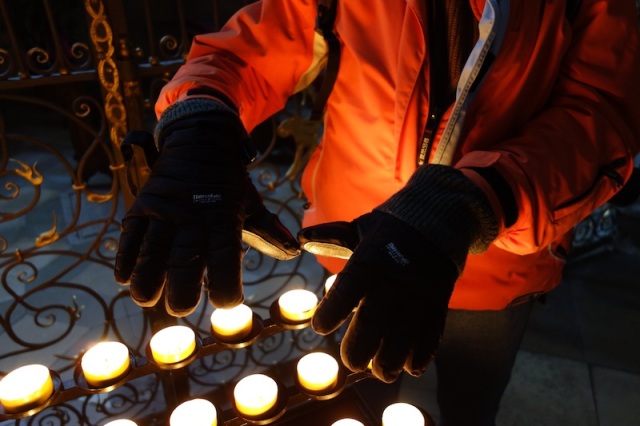 It’s cold when it’s too cold to take your gloves off to warm your hands!

After warming ourselves in the Dom we visited the Fuggerei, the oldest social housing settlement in the world. In modern day terms it is a housing estate for the less well off.

The estate was the brainchild of Jakob Fugger the Rich.  In 1521 he founded the estate for needy citizens of Augsburg.  It is still operating as it was 491 years ago with an annual rent of one Euro, an equivalent of the rent paid since its establishment. To qualify for the cheap digs the tenant must not be in debt, be a Catholic and pray three times per day for the founder’s family.  Presently there are one hundred and fifty people occupying one hundred and forty apartments. The ones not occupied are set up as museum pieces or are used for offices.

The Fuggerei layout. The main entrance is through two arches (bottom left corner). 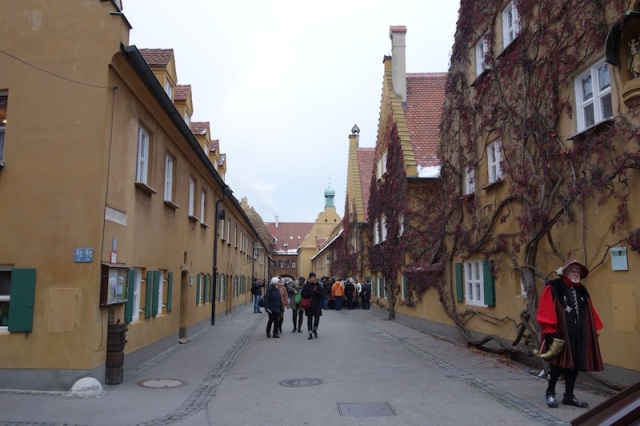 The view down the main thoroughfare looking back to the main entrance. The man on the right in traditional dress is an equivalent to a modern day security guard.

The Fuggerei was almost totally destroyed during WW2 but the tenants survived because they had the sense to dig themselves an underground bunker.  The bunker today houses an exhibition relating to Augsburg destruction by Allied bombing in 1945.

The security guard in the previous photograph was standing near the fountain.

Another photograph showing the result of Allied bombing during WW2.

During the Second World War, 1 499 Augsburg residents were killed in air-raids.  By the end of the war only somewhat more than 100 000 peopled lived in the city (today’s population is around 270 000).  Allied bombs destroyed one-fourth of the 50 000 homes and 32 000 homes were damaged.  On April 28, 1945, American troops advanced into the city without facing any resistance.

Following are a couple more images of damage caused by Allied bombing around Augsburg.

What I find amazing is the way the railway tracks have been uprooted, contorted and laid out like spaghetti on a plate.  Look at the section lying over the top of the carriages on the right hand side.

This is how it was in Augsburg during the reign of the Third Reich. 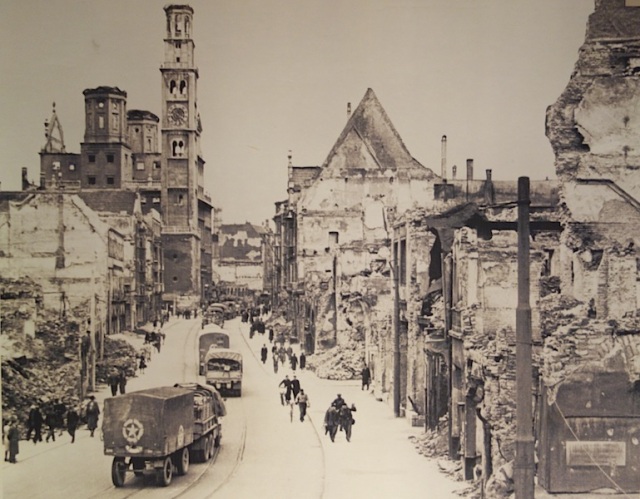 The aftermath of war.

It was very warm and comfortable in the apartments set up as museums.

A couple of old timers discussing whether to gather firewood, plough the fields or simply stay inside and enjoy the fire.

In the corner of the kitchen was this unique device for splitting kindling.

I would like to make one of these when I get home from this odyssey. I think a piece of spring steel from my friendly Tamworth spring maker will be just the shot for the blade portion.

The cooker in the corner. I now realise why people gathered in the kitchen. It was the warmest room.

Another building totally destroyed during WW2 was the town hall (Rathaus).  Looking at it today it is hard to imagine the work involved in rebuilding it.

The ceiling in the town hall. The gold here is not enamel gold paint, it’s fair dinkum gold.

What must the city fathers have been thinking when seeing this ceiling crumbling and burning.

Wooden ceiling in one of the adjoining rooms.

After sheltering from the cold in the Rathaus we ventured out (just on dark) to check out the market stalls. We only walked one aisle because it was so crowded.  From what we saw most of the stuff for sale was, as would be expected at this time of the year, associated with Christmas.  I’m afraid I have become a bit cynical when it comes to Christmas markets as I see only the commercial aspect of ‘consume, consume, consume’.  There is no doubt that the people making the stuff are talented and if I had half their skills I would be happy but these days I keep asking myself do we really need the stuff. But I suppose it is a cultural inheritance to create and make a living. 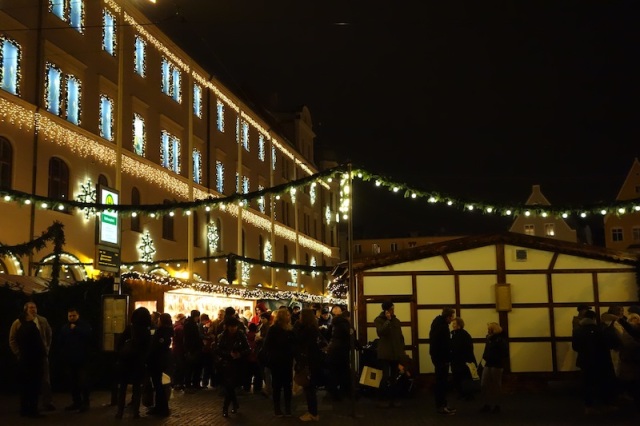 The next posting will relate to St Gallen, a very arty and historical city in Switzerland  where our friend Susie lives.