Apologies to readers: There has been a gap between the last posting and this one as we have been on the move and unable to access the internet.  However now we are in a stop mode we will have more regular postings and complete the remaining sections of our odyssey.

This morning it was snowing heavily and even though road conditions to the south were not ideal we had to move as we wanted to get into the warmer climes of southern France as soon as possible.

There are two regions in the south of France we want to visit and they are the Camargue, a vast wetland area where the River Rhone floods into the Mediterranean Sea and the Cevennes, an alpine massif, where Scottish author Robert Louis Stevenson travelled in 1878 with a donkey. Visiting the Cevennes will be a literary pilgrimage for me as Robert Louis Stevenson is one of my favourite authors.  In 1973 we passed through both regions on our way to Spain (chasing the sun on that occasion too) and since then we have always wanted to return.

A few days ago we bought a couple of large scale maps and after studying them I said to Bev ‘see if you can get us there without travelling motorways and major roads and avoiding major towns’.  By the end of the day today I realised the request was a tall order as the south of France, like most of Europe, is a mass of roads and many are congested.

Tonight we are staying in a hotel (more like a motel) at Sevriers on Lake Annecy. Bev booked the accommodation via the net.  The web page gave the impression the hotel was on the lake edge and surrounded by national park.  The reality was a very different matter. It was set back about a kilometre from the lake edge and between the lake and the hotel was a major road.  However the hotel was clean and well appointed and cost only $40 for the two of us.  Nowhere in OZ would you find an equivalent for less than $90.

This afternoon we went for a walk around the lake edge and came to the conclusion that in the summer season the region would be very popular as there were many boat moorings, picnic and swimming areas.   However it was a different matter today, the only two food businesses open we saw were the supermarket and McDonalds, the latter being a very cosy place to sit out of the cold. Outside it was minus three.

All through Europe boat owners lift their boats out of the water for winter lest the lakes freeze.  If this occurs the intense pressure of the ice can damage the boat’s hull and, as well, exposing boats to such extremes adds to maintenance bills.

Very cold view across the lake. 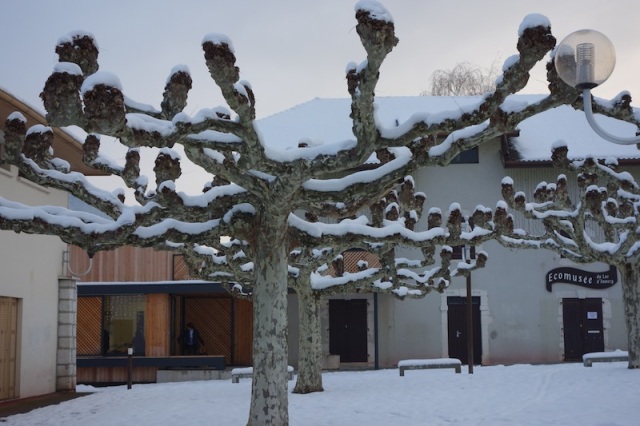 Europeans have been pollarding trees since medieval times and it was done for a number of reasons. The foliage provided fodder to feed livestock, the cut branches provided poles for fencing and general building and in latter years it was a way of keeping a tree in its juvenile state which meant that in many cases the tree didn‘t outgrow its bounds and was less likely to blow over in strong winds. 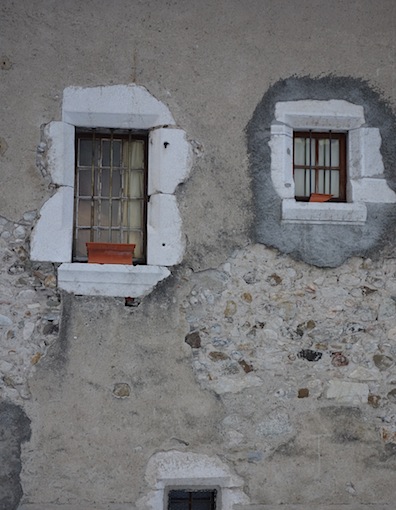 In architectural terms these lintels, jambs and sills could be called raggies because they have one ragged side. 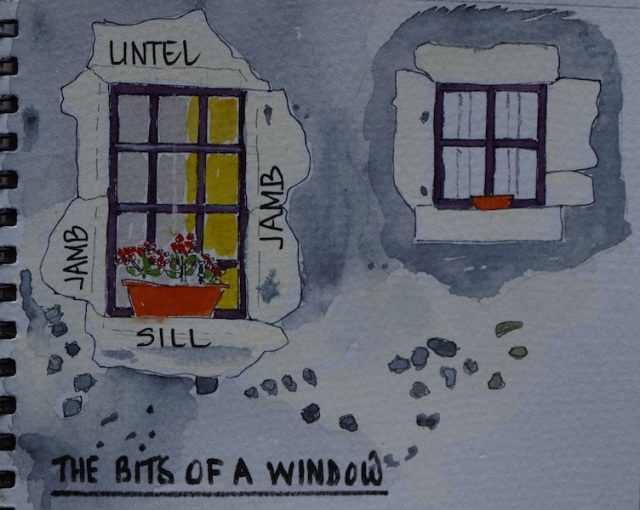 Of all the windows we have seen so far I think this one is my favourite.

By now you must realise that I like to speculate as to how and why things are so. This image allows me to speculate. Were the window jambs, sills and lintels scrounged from another building or was one edge left rough to save money? Regardless, they look real neat and if I owned this building I would leave them just the way they are.

Tomorrow we are heading for Tarascon, a small medieval town on the Rhone River.  We will use Tarascon as a base for exploring part of Provence and the Camargue region to the south.

This morning we left the hotel well before sunup. We consulted the maps last night and planned our route south trying to avoid the most populated cites and towns.  The plan was to turn left out of the hotel carpark but when we attempted to do so we were confronted with a traffic jam so we turned right instead.  Turning right meant the first part of the trip was not along the route planned.

Last night I had visions of the lesser-used roads we chose to travel as being quaint backtracks but they turned out to have bumper-to-bumper traffic and on one occasion we were forced onto the motorway.  When I saw the traffic this morning I thought of processional caterpillars.  Early in the day it snowed heavily and because the outside temperature was around three degrees below zero the road had frozen in spots so it was down to a first gear crawl.  However later in the day the weather cleared and we actually managed to get onto a backtracks.

Snowstorm on the way south today

Care is needed when driving icy roads such as the one this morning.  My strategy is to get behind another car and follow it then if there happens to be an icy spot and the car in front starts sliding about I then know what action to take.

On the road to warmer climes. 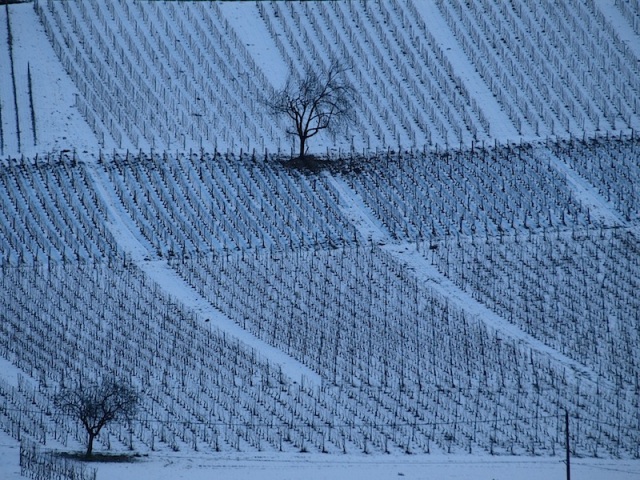 Grape vines in hibernation. In most fields there is a lone tree, left there for the workers to rest under.

Today we drove about 350 kilometres, which was a long drive by European standards.  It took ten hours (actual driving time nine hours) so that will give you an idea of how thick the traffic was in places. I lost count of the number of sets of traffic lights there were and the number of roundabouts we negotiated. In some villages of France there are traffic lights where at home there would be a give way sign.

Hotel du Viaduc at Tarascon is our digs for a couple of nights. It’s by no means five star but it’s just the sort of place we like to stay, mainly because it has an interesting past (it was used as an R & R establishment for soldiers who lived in a nearby military barracks) and it was also interesting from an architectural point of view. The owners and workers are super friendly and every effort is made to make us feel at home and comfortable.  If we are not careful we may end up here for more than two nights. 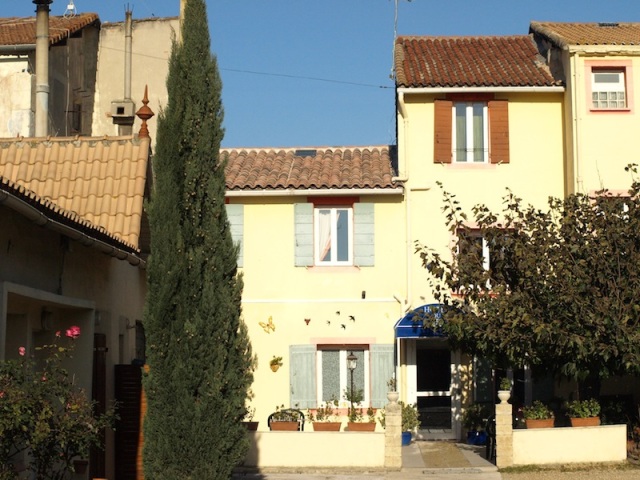 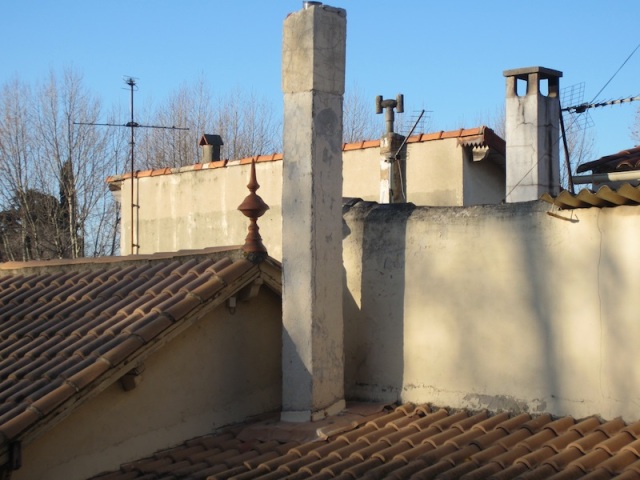 View from our bedroom window.

l Iove this picture with the finale, chimneys, TV aerials, tiles,  shadows – everything. I will have to draw it when I can find the time. 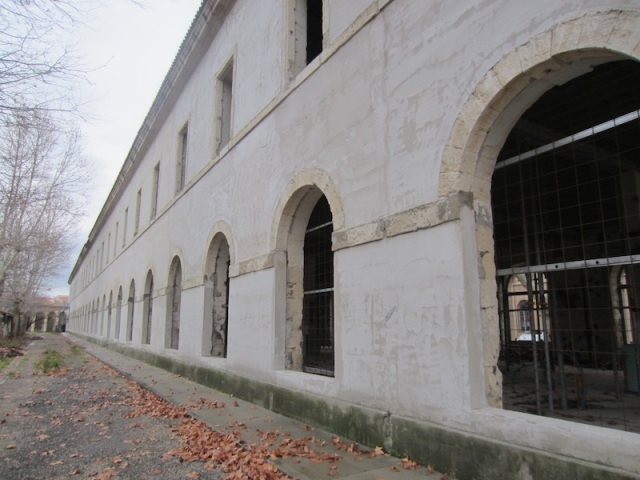 The deserted military building next to our hotel.

I asked a local what was planned for the building as it had been gutted and appeared to be waiting restoration.  The reply was nothing because the man who was involved with the restoration ran off with the money!

Hotel du Viaduc on the other side of the fence.

There were five buildings like this, mainly used for dressage and other horse activities.

From my reading this area of France has been a very horsey area for centuries.

And this is how it used to be.

Hotel du Viaduc is surrounded by history and that is what makes it a good place to stay.  For centuries ships have been plying the River Rhone and coming to Tarascon, sometimes with not so friendly intentions. Unfriendly visitors ‘took over’ which means the town has taken on a very cosmopolitan look.  For example the architecture reflects varying styles such as Medieval, Romanesque, Spanish mission and Renaissance periods. The tourist blurb doesn’t pinpoint the origin of the styles, it says the styles are simply French.   From my observations and experience the French are a very independent mob and they like everyone to believe that whatever you are looking at was their invention.

Tomorrow we are going to explore the old town of Tarascon  and then drive south to the Camargue and the Rhone delta area.