When staying put in a town or city we have a tendency to eat, drink and socialise in one location, especially if the café has a good internet connection. In Chefchaouen we found Restaurant Haji opposite the entrance to the Kasbah. The table settings were, as would be expected, colourful. 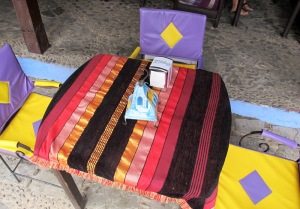 Café Haji table setting. This was our favorite café in Chefchaouen.

Bev and Omar, the proprietor of Café Haji in Chefchaouen.

The tree trunk painted white is a mulberry tree. Omar took his shoes off and climbed on a table to harvest some berries for us.

Organic mulberries. There was a certain air of genuine friendship around the Haji café. 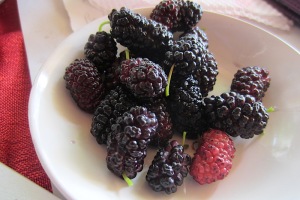 Mulberries fresh off the tree.

Sitting in the outside section of the Haji cafe was a great spot to sit and watch the world go by and following are a few photographs of the passing parade. 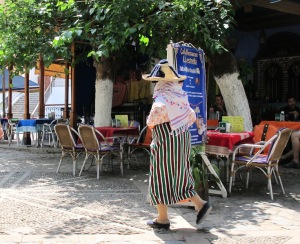 Berber lady in a hurry.

According to a medical friend of ours the gentleman in the above photograph most likely has a form of Spondylosis.   He was probably suffering from back and leg pain. I should have bought him a decent walking stick.

There are many questions to be answered when it comes to human suffering. It can of course be physical, mental or both. Various religions explain suffering in different ways.

Buddhism: the very basis of Buddhist belief is concerned with suffering and the four noble truths go in part to explaining it.  Islam: There are two views which in fact resemble views held by Judaism and Christianity and that is pain and suffering is a result of sin and is a test of faith.  Hinduism. Hindus maintain that man is the architect of his own fate and maker of his own destiny (karma).

One particular drug freely available around the Chefchaouen area that people use to help alleviate pain and suffering is cannabis.

The female cannabis plant is called hashish or simply hash. Marijuana is the most common and least powerful form of cannabis. The name hashish is an Arabic word meaning grass. At no time were we offered hash although younger travellers we met were. I was offered potions for the libido instead.

The Moroccan drug industry provides much employment, a positive in an area of high unemployment. The population of Morocco typically concedes to hashish and this could explain why the government in part has been unsuccessful in closing the industry down. It is estimated that around 60% of marijuana seized at ports around the world has its origins in the Rif Mountains of Morocco.

One hazard in and around cafes are native bees that come to share mint tea or any drink with sugar therein. There have been cases where bees have been ingested and have caused severe allergic reactions. If you are drinking directly from a can make sure a bee has not crawled inside the can. The bee will invariably sting as it goes down. And it is best not to drink directly from a can without washing the top because I have read of illness caused by mice or rat urination on the cans while in storage and there are nasty bacteria in rodent urine. 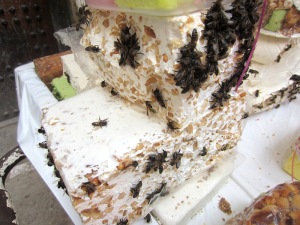 Bees on nougat. Flies transmit diseases to humans so maybe bees do it too.

There are many cats in Chefchaouen and a lot seem neglected. In an Istanbul post I went into the history of cats and the part they play in the whole scheme of things. Search Day 4 Istanbul and scroll down thirteen photos to the picture of a cat and read on.

Cats are a necessary evil in Chefchaouen I imagine, like in many crowded towns and cities. Without them the town would most probably be overrun with rats.

One of many Chefchaouen cats. 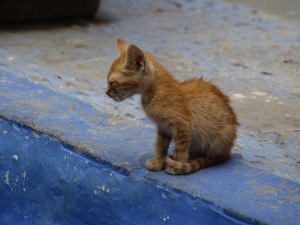 A poorly kitten. It was contemplating a jump down the step.

Following are some images showing more colours within the Chefchaouen medina and some of Bev’s favorites. 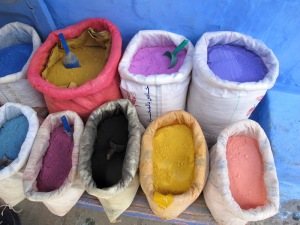 These dyes are associated with the art of body decoration called henna tattooing.

The term henna comes from the henna plant (Lawsonia inermis). Leaves of the plant are crushed and the juices extracted are made into a paint which is used for body painting.

The henna plant is a native to southern Asia, North Africa and the semi-arid and northern regions of Australia. Bev and I have travelled extensively in Australia and to date have not found a henna plant but if we venture into the desert this coming winter we will be on the lookout for a specimen. 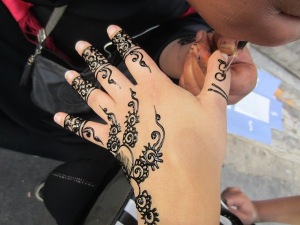 The art of henna. This photograph was taken in an open-air market. The dye being used here may or may not be genuine henna plant extract.

Extracts from the leaves of the henna plant have been used to adorn women’s bodies and dye both men and women’s hair since the Bronze Age times. Evidence suggesting that body decoration was associated with fertility dates back to 1450 BC to 1200 BC.

These days the art of body painting has taken on a more commercial aspect as many young female tourists have their hands and bodies decorated with henna tattoos. One authority suggests that only natural red brown henna should be used, not black as black henna contains a nasty compound that may cause injuries to the skin. Henna tattoos are not permanent, they wear off in time.

Colour is on the buildings, in the plants (bougainvillea) and goods for sale. 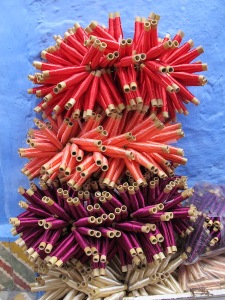 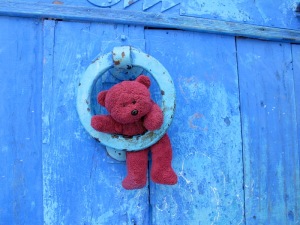 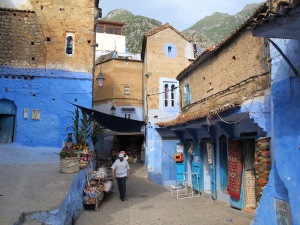 A quiet laneway with no hassles from touts.

Almost 100% of the Chefchaouen medina is developed. Close living is something the locals are accustomed to. 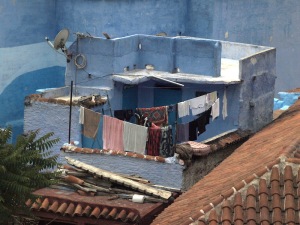 Most of the houses have a rooftop living area. 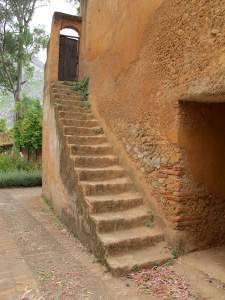 Well worn steps in the Kasbah. 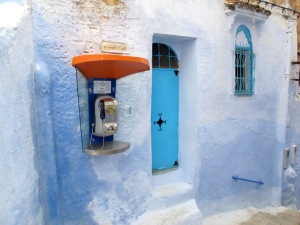 The friendly hound following me after the walk to the Spanish Mosque.

Another of Bev’s doors. 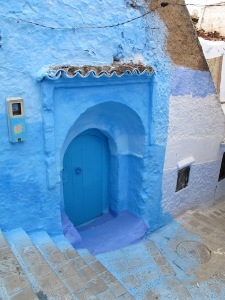 A local showing us the way to go home.

Again we come to the end of the Chefchaouen Part 2 post. The next post will take us to the city of Fez where surprises await us.   Bev and I hope you are enjoying our Moroccan sojourn and we hope you will tag along with us. If you are new to this post and you want to continue, click on follow and you will be alerted each time we do a new post. Please leave a comment as we like to hear from our followers.

It’s rewarding to find a place where you can relax… Chefchaouen is one of those places.