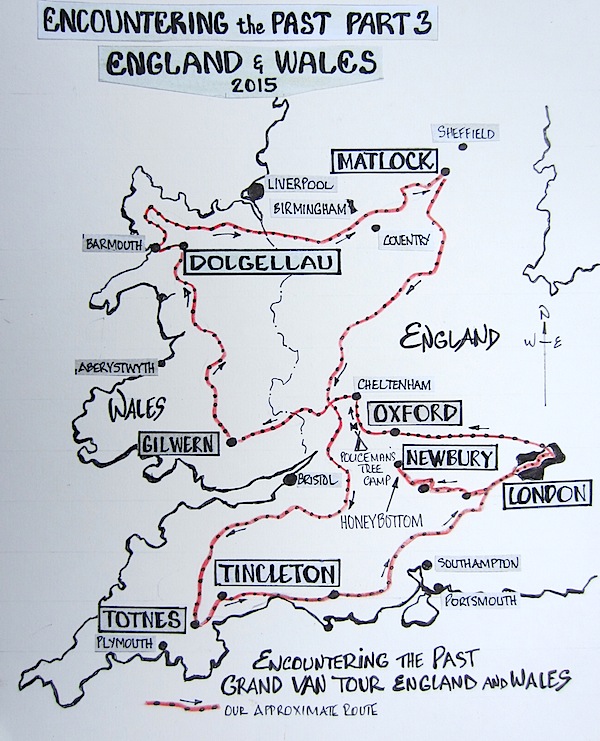 From Policeman’s Tree Camp we pushed on towards Cheltenham to a Tern bicycle agent. The plan was to replace the broken rear sprocket circlip on my bike.

The distance between the two camps was not all that far but it took us most of the day as we wanted to revisit Ledbury (visited previously in the 1970s) and what is touted as the most photographed street in England. From what I could see very little had changed, the box framed and Wealden houses were still intact and restoration had been done with heritage in mind.

Church Lane is the most photographed street in England, according to locals.

Ledbury has some fine examples of box-framed and Wealden houses. When painted they are more commonly known as black and white magpie houses. There are towns in Germany and France where the same building technique was employed but the ones in England are more dramatic because of the black and white contrast.

A Wealden house is similar to a box frame but the top floor projects outside the lower floor. These types of houses were built during the late medieval and early Tudor times and their style in many cases emulated the floor plan of the more elaborate manor houses.

The term ‘box-frame’ is self-explanatory and the construction method is relatively simple. A sole plate is laid on top of the foundations then vertical posts are erected and held in place by horizontal beams and cross braces. The upper floor overhang is called ‘jettying’. The jetty provided not only structural strength and additional floor space but passers by could shelter under the eaves from the rain. This is where the term ‘eavesdropping’, meaning listening to others’ private conversations, originates. 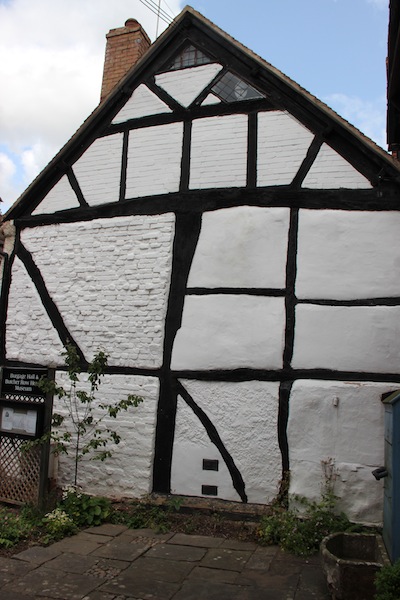 A box frame house on the corner of Church Street Ledbury.

Once the box frame was in place the roof could be added then the wall infill secured. The material used for the infill was usually what ever was available locally and ranged from flint, free stone, mud, or in the case above, fired terracotta brick. Prior to the industrial revolution the timbers in the construction were left natural but as coal tar became available the timbers were painted as a way of preserving them.

The Market House in Ledbury is the central feature of the town. Building was commenced in 1617 and in its early years the upper room was used to store wheat and corn and the lower portion was, and still is, used as a market area. The stilts are made from English oak. 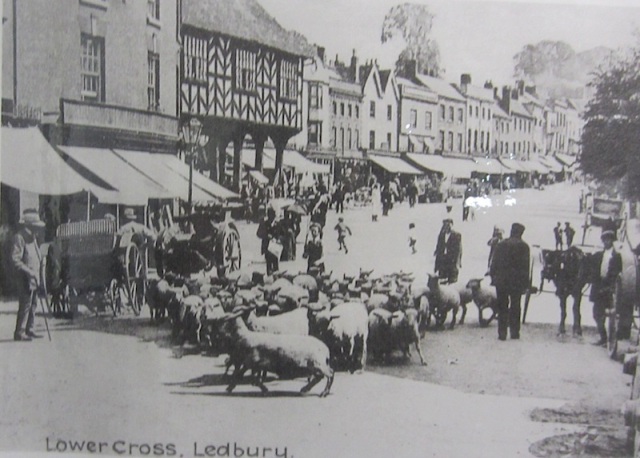 How it was in Ledbury before the advent of the motorcar. 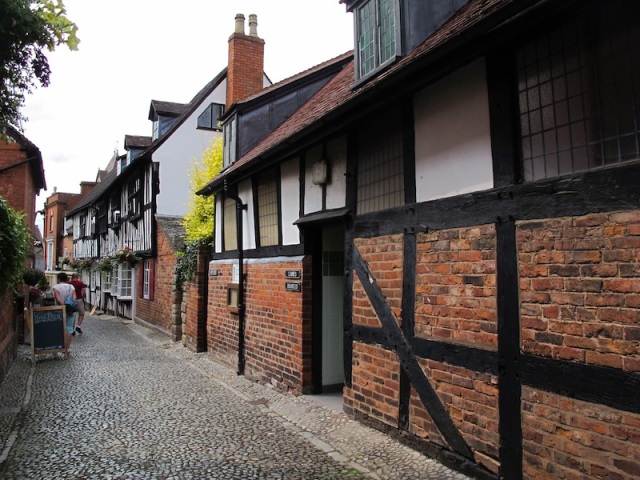 A street of box-framed houses with terracotta brick infill.

One of the most appealing aspects of domestic architecture in England is its regional aspect. Throughout the UK houses were built mostly from local materials as there was no efficient way of transporting materials over long distances. A knowledgeable botanist is able to tell where he/she is relative to plant and tree species whereas a knowledgeable architectural historian will know from the materials a building is made from.

The house above is a masterpiece and I would bet it is a listed building. It would be sacrilege to change this house in any way whatsoever. Note the Elizabethan windows, free stone tiles and massive carved barge boards. There is a saying that if you give a house a good pair of shoes (foundations) and good hat (roof) it will last forever. I believe the builders of the above house had this in mind when they built this masterpiece.

From Ledbury we pushed on to Cheltenham to a Tern bike agent. Explaining the problem to the mechanic he questioned my prognosis and insisted the problem was in the hub gear unit and I would have to buy a new unit. A new hub unit was to cost around $210 and it would take four days for delivery. I reiterated that it was a broken circlip and asked if there was small bike shop nearby where I could buy a new one.

The mechanic at Williams, the smaller bike shop, understood exactly the problem and he suggested I remove the wheel and he would look at it. Within minutes a new circlip was in place and ‘me and me bike’ were once again ready for the road. 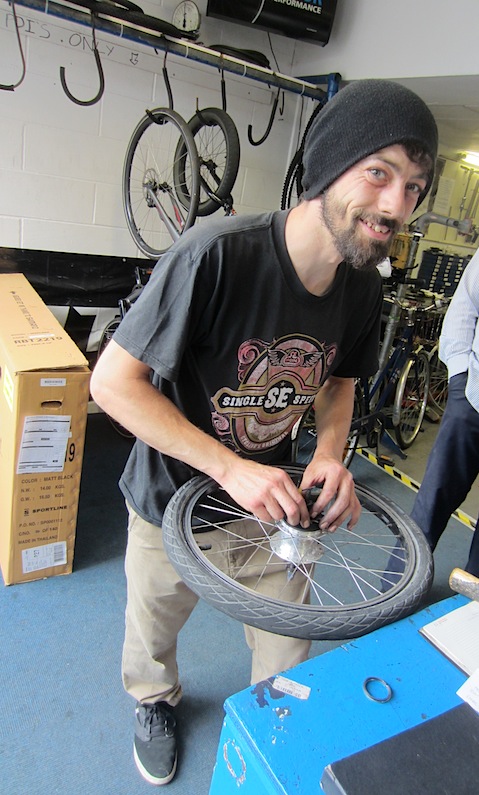 Brian at Williams bike shop, on the job replacing the broken circlip. The new circlip is on the bench.

Brian signed my concertina book with a greasy thumb and when it came to paying he said six pounds ($12) and because he saved me $210 I gave him $20 and said ‘have a beer on me. 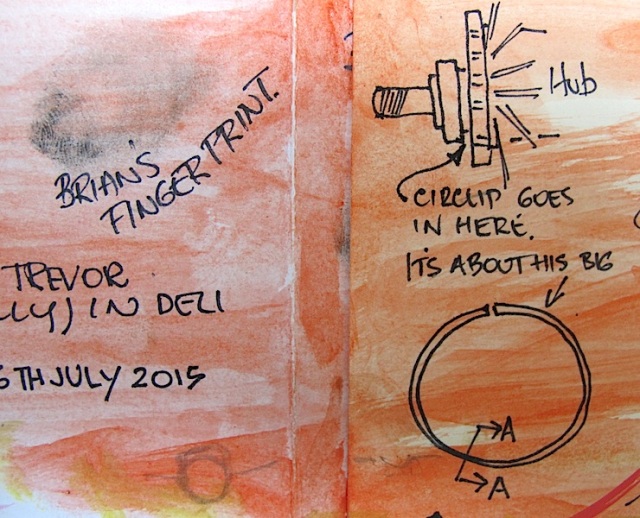 At day’s end it was no trouble finding a camp. We went into an apple farm and asked the owner for permission to camp in his orchard. Over the years Bev and I have camped in olive groves, cork tree forests and vineyards but never in an apple orchard.

The owner of the farm was on for a yarn as he had spent time working as a jackaroo on a cattle property in western Queensland. Jackaroos were called upon to do all manner of station (large property) work including mustering, fencing, boundary riding and even clerical work. They were afforded special privileges above other farm workers. One privilege was to dine with the owners and in the process learn proper table etiquette. During my surveying days when working on large pastoral holdings I was often invited to dine with the owners and on a number of occasions the jackaroos who worked on the property dined with us. Under such circumstances we were all required to dress appropriately which meant the wearing of a coat and tie.

There are many theories as to the origin of the word jackaroo but it is generally accepted that jack comes from jack-of-all-trades and roo from kangaroo. In recent years many young girls have taken to working on properties and they are called jillaroos. 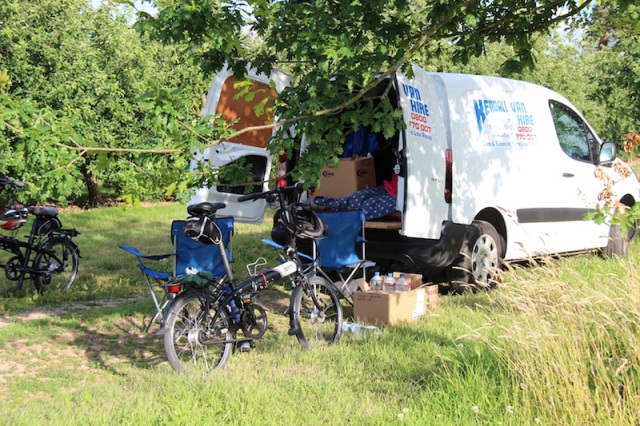 Camped under an oak tree in the orchard.

Many apples grown in England are used to make cider and probably the most famous of the ciders is Scrumpy from the western regions of England. Scrumpy generally refers to a rough harsh cider and was made from unselected apples including rotten windfalls. According to the English Dialect dictionary the use of the word ‘scrump’ applies to anything small or undersized, particularly apples. The reference also notes that a small apple is called a scrumpling.

It is believed apples had their origins in the Tian Shan region on the border of Kazakhstan and China and an early mention of apples in England was in 885AD. By the 13th century Costard apples, a sweet variety, was available and sellers of them were known as ‘costarmongers’ and hence the word costermonger referring to a fruit and vegetable seller. Costermongers had an unsavory reputation for their low habits, improvidence, love of gambling, total want of education, disregard for lawful marriage and their use of a peculiar slang. There was a popular English television series aired on the ABC in Australia called the Bill and it followed the day to day activities of London police and on many occasions the ‘Old Bill’ often perused criminals (toerags) in markets among the modern day costermongers.

Research tells us that apples have many positive health aspects and they include their cardiovascular, antioxidant, blood-sugar regulation, anti-cancer, asthma and macular degeneration qualities. The saying ‘an apple a day keeps the doctor away’ may well ring true. The saying per se relating to apples and health was originally ‘Eat an apple on going to bed, and you’ll keep the doctor from earning his bread’. Research in 2011 indicated that eating an apple a day does not actually keep the doctor at bay but people who do eat them use fewer prescription medications. This to me means an apple a day person is healthier. However if one is going to eat an apple a day they need to be best quality certified organic as many non-organic apples are in the top four most contaminated fruits and vegetable and it’s because of the particular shape. Below is a sketch showing what I mean.

The problem with the apple is the reservoir (where the stalk joins the apple body). Chemicals are retained in the reservoir and soak downwards through the apple flesh contaminating the apple, whereas with a pear the contaminants run off freely.

Not only are apples easily contaminated by pesticides and fungicides but the majority of non-organic apples have had their natural wax layer removed and may have been re-waxed using petroleum-based wax which is not particularly good for you. The reason for re-waxing is to make them appear shiny and theoretically healthier looking. Re-waxing also preserves them and thus they have a longer shelf life.

MOST CONTAMINATED: Apples, celery, strawberries, peaches and spinach. I also think Brussel sprouts, broccoli, lettuce and bananas could be added to this list.

Before leaving the subject of apples there is one apple that millions of the world’s population come in contact with every day and that is a computer or mobile telephone carrying the Apple logo. Steve Jobs, the founder of Apple, was inspired to use the apple as a symbol after visiting an apple farm when on a fruitarian diet. The logo was designed with a bite so it would not be confused with a cherry.

On this contemplative ‘an apple a day’ note I will close this post. The next post will take us to Dollgellau in Wales where we stay with a friend and use her place as a base to explore a very beautiful area of Wales.

Next time you go to the supermarket ask the assistants if the apples for sale have been re-waxed and if they have ask them if the wax used is petroleum-based or is it beeswax or shellac. Beeswax and shellac (from the Lac beetle) are preferable.