On the way from Exeter to Tincleton to visit with friend Joan our first seaside encounter was at the town of Beer. The tourist blurb says: ‘A picture postcard village sitting on the Jurassic coast within a World Heritage site. The village boasts a small fleet of working fishing boats and being surrounded by picturesque white cliffs provides a natural suntrap sheltering the cove from prevailing westerly winds’.

The cliffs and beach at Beer Devon.

A not all together pleasant day to sunbake.

The beach huts along the shoreline in the above photograph provide a private place to change, sit out of the wind and store one’s belongings. It is estimated there are around 20 000 beach huts in the UK and depending on their location they can fetch up to $70 000 each. Beach hut enthusiasts suggest the most famous group of huts is along Brighton Beach in Melbourne Australia. In January 2016, a Brighton hut sold for an incredible $285 000. 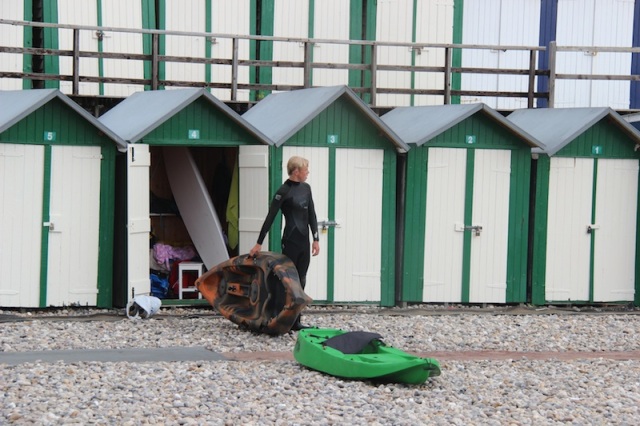 Permanent beach houses such as those above evolved from the Victorian era bathing machine, a hut shaped device, which was wheeled into the sea.   The Victorian Period hut on wheels allowed swimmers to change out of their normal street clothes into swimwear and swim unobserved. Both sexes had to comply with the strict laws relating to bathing in public, men and women were segregated so neither could get a glimpse of each other. 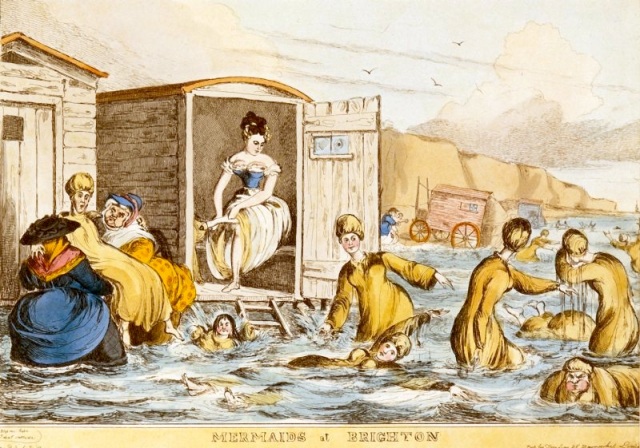 Mermaids at Brighton (England) swim behind their bathing machines. Engraving by William Heath circa 1829. Image credit: In the public domain. Author Playtime via Wikipedia.

The flint beach at Beer.

There is evidence to indicate that humans have been using flint to make knife blades, arrowheads, spear points, scrapers and axes for at least the last two million years. Flint is more commonly known as chert and is hard, tough and highly resistant to weathering. The best flint for toolmaking is not the beach-washed pieces, the better quality was shallow-mined.

Another unique quality of flint is when broken it splits with a conchoidal fracture, which means there are no planes of separation such as in slate. Conchoidal fracture marks often radiate out in a circular pattern from the point of impact and these are called hackle marks. The process of splitting flints, whether for tools or as a building material, is known as flintknapping.

Flint often forms as nodules in sedimentary rocks such as marine limestone or, in the case of the flint at Beer, in chalk. The nodules can be randomly dispersed or in distinct layers.

A knapped flint on the left and an unknapped one on the right.

Aboriginal knapping site in the Australian desert. Amazing to think that in Australia knapping sites like this still lay in wait for the observant explorer to find. Note the animal tracks in the sand.

Stones to be knapped as shown above were placed on the lager stone (anvil) and struck with another large stone from above. The operation was repeated until the desired shape was achieved. The number of shards indicate how meticulous and time consuming the making of spears and axe heads was. This photograph was taken in the Sturt Stony Desert. 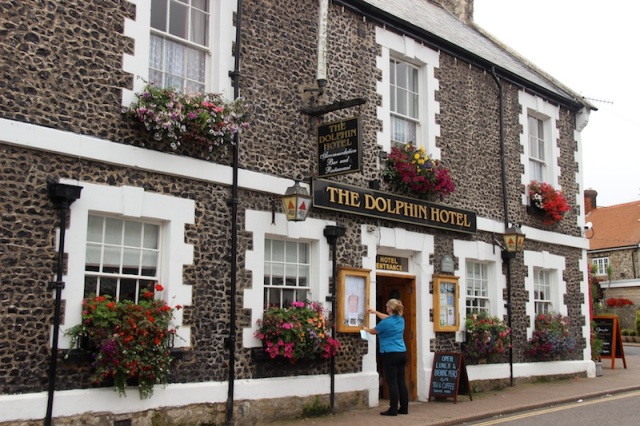 This hotel in Beer is built from knapped flint.

The town name of Beer, according to Wikipedia is not derived from the drink, but from the Old English word bearu meaning grove and referring to the original forests that surrounded the village. 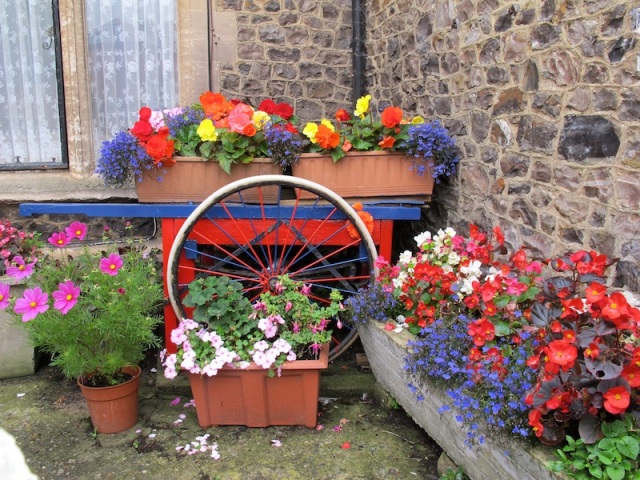 A flintknapped wall. The raised mortar lines between each flint are called ‘tuck pointing’.

From Beer we headed a little further along the Jurassic Coast to West Bay for a look at the iconic sandstone cliffs that appeared in the ITV drama Broadchurch.

From West Bay we drove on to Tincleton, a small village near Dorchester, where we visited the daughter of the late John Saunderson. John owned Honeybottom estate in Berkshire where Bev and I spent time in the 1970s and ‘80s. The next two posts will relate to our times when living at Honeybottom.

An antique cast iron signpost to put you in the picture.

Tincleton is a small village on the Frome River and near there the Frome and River Piddle join forces and flow into Poole Harbour. You are probably smiling and thinking to yourself why a river would be associated with piddle. In AD 966 it was called the ‘Pidelen’ and some time later the name was changed to Piddle/pidelle, which in old Dorset speak means water coming out of the ground. There are a number of villages in the area with the word Piddle making up part of their names: there is Piddlehinton and Piddletrenthide, where you can drink Piddle Ale at the Piddle Inn. There are other villages in the area where the word piddle has been replaced with puddle. There is Puddletown, Affpuddle, Tolpuddle and Brianspuddle. According to local folklore piddle was changed to puddle because Queen Victoria was visiting the area when young and the locals thought the word piddle was bordering on being offensive.

The changing of town names is what I call history sanitization. There is a town not far from where we live by the name of Woodenbong. Originally it was called Hoppingdick after an early settler named Dick who had a wooden leg, however the locals thought the name was unbecoming so it was changed to Woodenbong. It must be pointed out that references suggest that Woodenbong is derived from an Aboriginal word meaning wood ducks on water. The version relating to Hoppingdick was told to me by the Surveyor General of NSW who I sat next to at an official dinner. Who knows where the truth lies.

Our friend Joan is the owner of  Tincleton Gallery. About her gallery she says, ‘The gallery is dedicated to exhibiting contemporary fine art in Dorset. This does not always mean that we show only the work of Dorset artists or that the subject must always be Dorset. Instead we cast our eyes further afield looking for new insights and new artists as well as supporting the work of our local cadre’.

The gallery is located in the old Tincleton schoolhouse built in 1840 and Joan’s objective is to bring the original school classroom back to public use for art exhibitions and musical events.

Renewing our friendship. The old school house in the background. 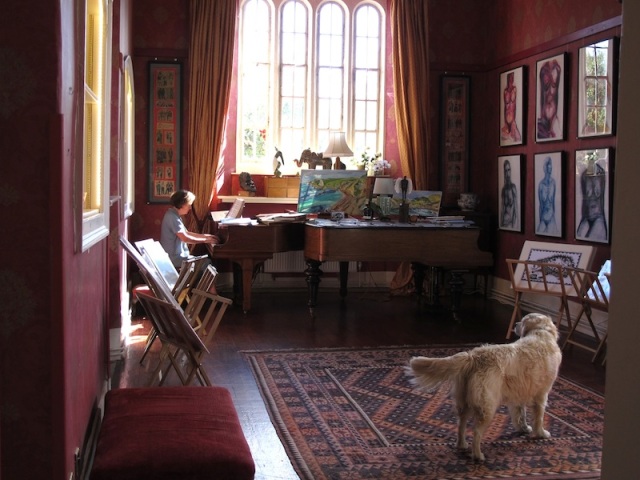 Joan playing one of the two grand pianos in the gallery, Sheba looking on.

And to quote Joan, ‘my dog is called Sheba, not Queen of but ‘Bathsheba’ after the heroine in Far From the Madding Crowd’.

When I asked Joan about her pianos she told me she has two grand pianos (slightly smaller than a full concert grand). One is a Steinway manufactured in New York 1904, probably a wedding present to her grandmother who married in early 1920s.  The other is a Bechstein.  She also has a third, an older one circa 1895, which ‘has a delicate softer tone’. This information may not mean much to the piano illiterate. I include it to get a sense of history that runs in the Saunderson family.

Of course it stands to reason that in an artist’s house there is going to be a family portrait close at hand and the one I admired was a portrait of Joan’s father, Edward John Saunderson painted by Nikki Danby, who Joan met at art college in the early 1980s. Nikki said she couldn’t paint John sitting down as he always looked like he was about to stride off into the garden.

The reason I am introducing you to Joan’s father, John, is that he had a great influence on my life. I will tell all in the two posts following this one.

When I looked at Nikky’s portrait of John my thoughts were that people walk in and out of your life but the one who stays the longest is the one you keep thinking about.

The origins of the Saunderson family go back to Ireland where they had a castle.

The castle had entrances in both Northern Ireland and the Republic of Ireland and I remember John telling me that on occasions there were a lot of shenanigans with people entering through one door and leaving by the other. 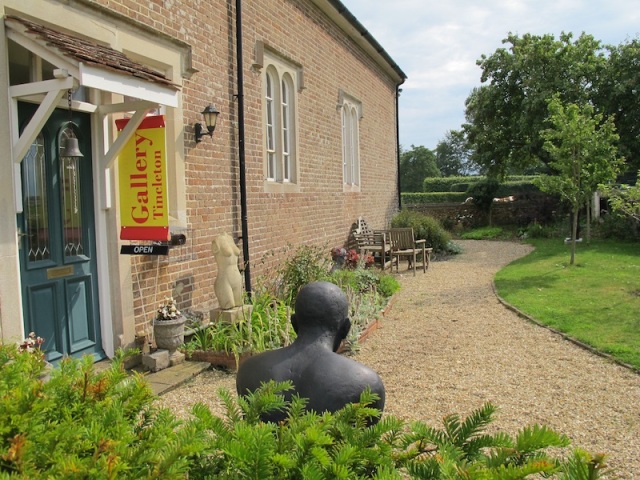 The garden sculpture in the foreground is the work of Lisa Lindqvist of Dorset. Following are a few more examples of her work. 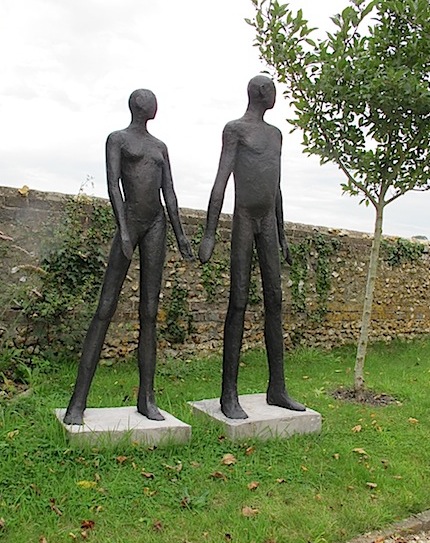 Lisa was quoted as saying ‘there is inspiration in everything’. Maybe she passed the tallest living person in England (seven foot seven inches tall) and was inspired to create this beautiful couple.

The sculptures in the gallery gardens are not solid bronze but a bronze resin mixture. The advantage of this composite is more airy shapes can be cast (something Lisa takes advantage of). They are lightweight and less expensive to produce, making the artist’s work more accessible.

My favourite artworks inside the gallery were woodcuts by Hugh Dunford Wood. 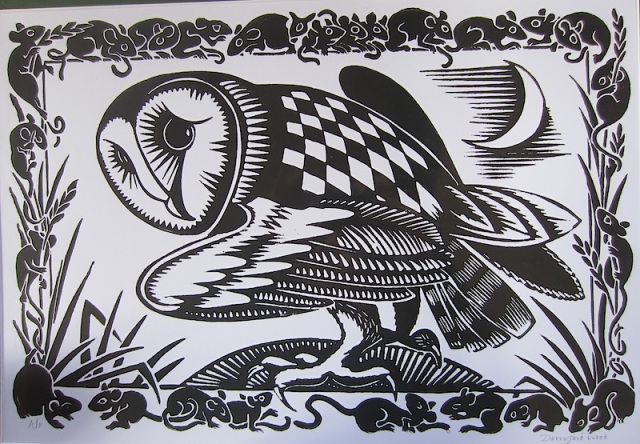 All owls dream of mice.

The English magpie surrounded by shiny objects. The Australian equivalent is the bower bird.

A squirrel on a food sortie. 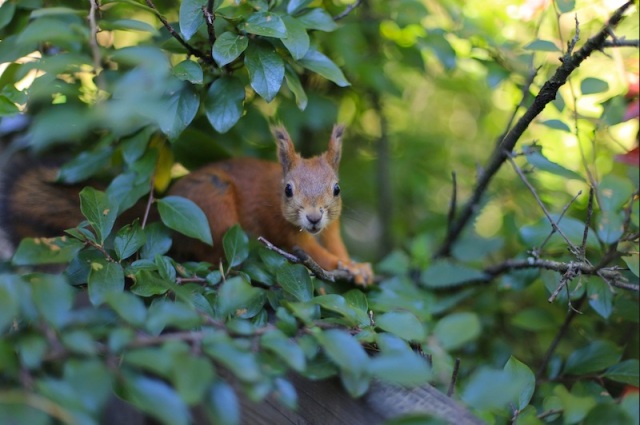 The grey squirrel, native to eastern North America, one of many spotted in English parks.