Observations from the saddle of a bike: Stuttgart Germany

During Encountering the Past Part 4 to Tasmania (yet to be published) we were camped at a caravan park in Southport Tasmania where we met Martin, a long distance cyclist from Stuttgart Germany who pitched his tent near our camp. Being a sociable sort of person and knowing cyclists carry limited food supplies I invited Martin to join us for dinner and breakfast. Our campfire conversations revolved around the rigors of travel, places visited and places to be visited. Martin suggested if we ever came near Stuttgart we should visit him. Stuttgart is not so far from Zurich so we included it on our travel route.

One could say Martin is a professional cycle tourer. He has visited many countries but the country close to his heart for cycling is Iceland. 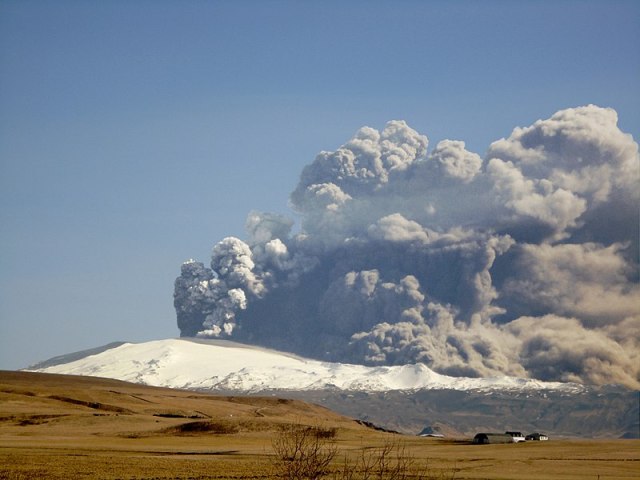 Ash plume from the eruption of Mt Eyjafjallajokull Iceland. Image credit: In the public domain thanks to Arni Frioriksson and Wikipedia.

Martin is an economist and when I asked him if he specialised in a particular field he diplomatically said ‘wise men who claim to be wise often turn out not to be so wise’, which I took to mean he preferred not to say. I guess people who are involved with determining future trends, which he does by modelling financial data, have a tendency to keep things close to their chest.

Staying with an economist gave us the opportunity to learn about the financial world, something we know little about. I took the opportunity to quiz Martin about terms used. For example, we hear a lot about GDP but what is it really. GDP is the monetary value of all finished goods and services produced within a country’s border in a specific time. Simply put, GDP is a broad measurement of a country’s overall wealth. Australia is 13th on the list. Preceding it and in order are USA, China, Japan, Germany, UK, France, India, Italy, Brazil, Canada, South Korea and Russia. From now on I will be watching the GDP figures for the USA and China and when China overtakes the USA I do believe there will be a commotion worth watching. 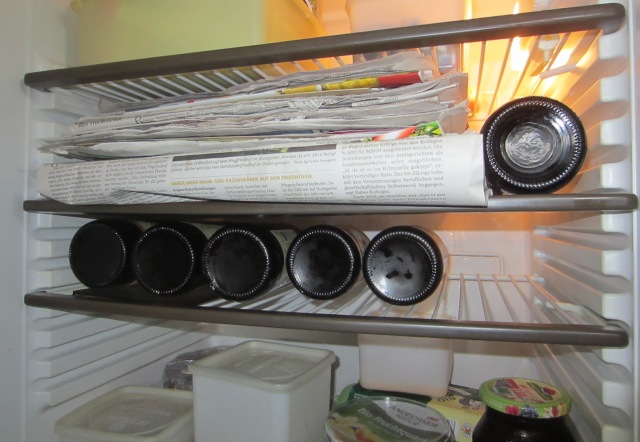 Economising on power in Martin’s refrigerator. Every little bit helps.

Finances and conservation aside Martin is also interested in how indigenous peoples of the world have been exploited by colonial powers, particularly Tasmanian aborigines by the British under the guise of coming forward to convert and tame. Martin may well know more about Tasmanian aboriginal history than the average Australian. He suggested to me that the long held belief that Truganini (1812-1876) was the last full blood Tasmanian aborigine to die is untrue. The last to die was Fanny Cochrane Smith (1834-1905). 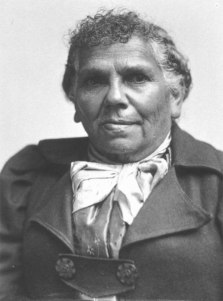 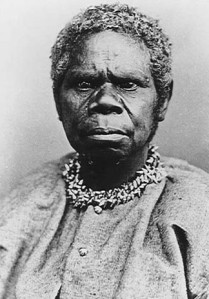 Following the death of Truganni in 1876, Fanny laid claim to be the last full-blood Tasmanian aboriginal alive. The government of the day recognised this claim in 1889 and granted her three hundred acres of land and increased her annuity to fifty pounds. Fanny Cochrane Smith died in 1905.

Prior to going to Martin’s house Bev and I didn’t know whether we would we be cooking for ourselves. Armed with a few basic vegetables and pasta we were prepared to make a simple brew as the situation arose. However Martin’s culinary skills came to the fore and went beyond ‘on the road cooking’. Each meal started with an entrée followed by a beautifully prepared main course.

Entrée of basil and tomato. 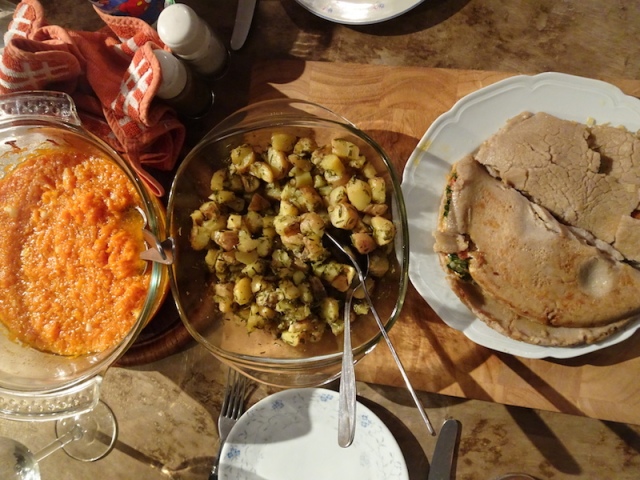 Ingredients for the meals came from his garden, Bev took a number of photographs and even though only one or two relate to food her other photographic efforts need to be aired.

A recent study of the bumblebee species in Europe suggest that a quarter of the species may be looking at extinction due to habitat loss and climate change. The bumblebee is much larger than the European honeybee commonly known for honey production.

An assortment of wildflowers.

Birkenkopf, or Monte Scherbelino, across the valley from Martin’s garden is partially manmade and is known locally as Shard Mountain. Following the destruction of Stuttgart by aircraft from British Bomber Command during WW2 and consequent rebuilding in the 1950/1960s remnants from the destroyed buildings were taken to the mountain of Birkenkopf and dumped. We rode through the forest, a steep pull to the top of the mountain, however we made it and the view made one think about the destruction of the city during World War 2.

The view from Martin’s garden. Shard Mountain summit is where the tallest trees are. We rode through the forest up to the top.

A low level aerial photograph of the devastated city of Stuttgart. Image credit: Released by the Imperial War Museum under the IWM non commercial license via Wikipedia.

Plaque on the way to the top of Shard Mountain.

The plaque translation: Built up from 471 metres to 511. 2 metres resulting in an elevation increase of 40.2 metres in 1953-1957. The deposition of building rubble involved the movement of 1.5 million tonnes of debris. Much of the destroyed Neues Schloss at the edge of Schlossplatz in Stuttgart would have been placed on Shard Mountain. The extent of the damage is shown in the following photograph.

Restoration of Neues Schloss commenced in 1746 and since completion various German rulers have come and gone including one of the youngest rulers. Following its almost total destruction there were plans to demolish what remained and build a hotel on the site, however conservationists advocated it be rebuilt. The plan to rebuild was passed by one vote only. Today the palace houses the State Ministries of Finance and Education and it is possible to take a guided tour of the palace.

In front of the palace today stands the Jubilee Column built in 1842-46 commemorating the 25th anniversary of King Wilhelm I’s accession and his 60th birthday. If one positions oneself appropriately a rather beautiful juxtaposition through the decorative iron lace of the city’s rotunda can be achieved. The statue on top is of goddess Concordia placed there in 1863.

Following are a few images of the rubble on top of Birkenkopf. It is said locally that the mountain is a legacy to those lost in the war.

From where did this portion of an arch come? Was it part of the Neues Schloss? 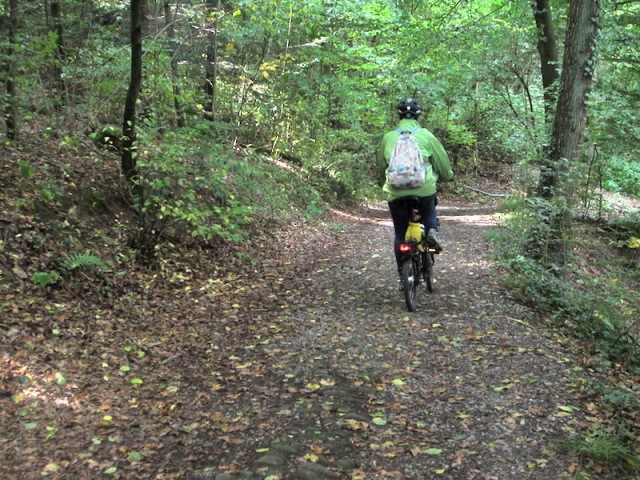 The ride down from the top of Birkenkopf through the forest was wonderful, downhill all the way. 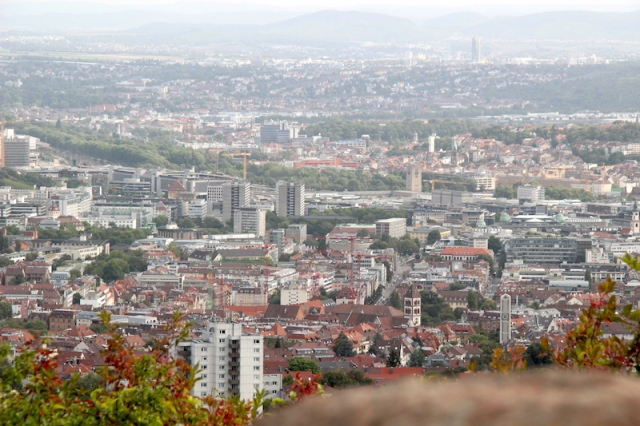 Stuttgart today. View from the top of Birkenkopf.

The Stuttgart cityscape is rather blocky. Gone are many of the historic buildings, replaced in many cases by a modernist style of architecture. The modernist style started well before Stuttgart was rebuilt but following its destruction during WW2 utilising this style meant buildings went up quickly. Some suggested the style projects an atmosphere of socialist totalitarianism and this may well be true when one looks closely at buildings constructed in the eastern bloc countries during the Cold War. Exposed raw concrete walls have earned the name of ‘brutalism’, a very adapt description.

Bev and I went into central Stuttgart on two occasions. On the first a Saturday farmers’ market was in full swing and the second was the morning we left by train to travel to Augsburg to the south. Following are a few photographs taken during those visits, but first a bakery on the way. The workers were so jolly and appreciative of our visit I have to include some images.

In Germany there are around 600 different types of bread. The breads and an additional 1200 hundred types of pastries are baked in 17 000 dedicated bakeries. The German Bakers’ Association has applied to UNESCO to have their breads listed as World Heritage, so serious are they about their breads. Of course dedicated bakeries are not the only ones, there are ten thousand in-shop bakeries as well.

And the bread in the Klinsmann Bakery.

Getting daily bread (brot) is a significant part of German culture.

An in-shop bakery? Sorry, no, it’s not a real bakery. It’s a photographic reproduction on the front of a supermarket.

While waiting outside the supermarket for Bev Stemmi came to me and enquired about our bikes. He worked at the local council animal pound and he told me he had eight cats and dogs at home that he acquired from the pound because no one would adopt them. One has to give credit to people who take home a dog or cat that no one wants. We all know such people. 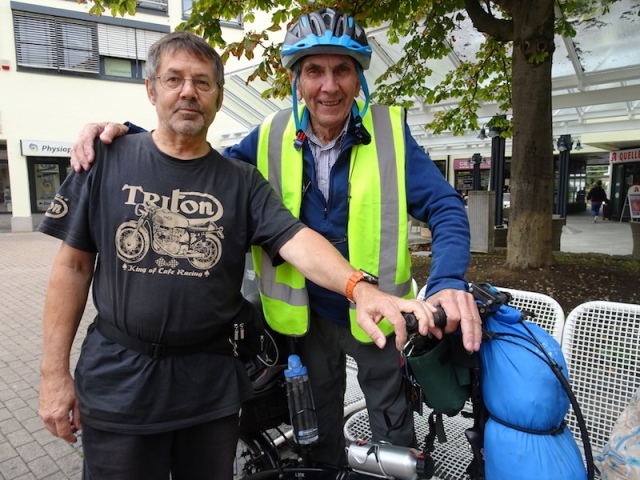 Stemmi was proud to stand by me and advocate Triton motorbikes.

Triton on Stemmi’s shirt: Triton motorbikes were hybrid bikes built in England in the 1960s and 70s. Mostly were privately built but some London dealers offered complete bikes. The builders fitted Triumph engines to Norton frames and the aim was to combine the best elements of each into the Triton and gain a superior bike. Tri from Triumph and ton from Norton were combined to give the name to the hybrid.

Stemmi wrote a message in my concertina book: ‘I hope you never have an accident on your bike and to yourself’.

Markets are another part of German culture, in fact European culture generally. It is often noted that when historians describe a town’s origins they emphasise when the town was granted ‘market status’. The Saturday morning we went into Stuttgart there was a farmer’s market in full swing. We wandered and enjoyed and following are a few images.

Berries at the farmers market. Raspberries, blueberries, blackberries, and strawberries.

Flowers in the farmers’ market. Basil in the foreground.

Honey products. No, we can’t carry any!

Sand sculpture. This piece was created by a Bulgarian. We had a yarn, shook hands and went our way.

The next image shows a talented but disabled busker. It is hard to imagine the challenges this particular busker faces in life and we gave freely to him. Some might say that including this photograph in my writings is a little out of taste, however I include it to make the able bodied of us appreciate what we have and how fortunate we are.

Peace be with you my friend and may your next life be less traumatic.

Here is Bev riding through the theatre complex shopping mall.

There is a novel based around Stuttgart that I enjoyed immensely and that was the 2005 novel ‘The Book Thief’. In the book protagonist Max Vandenburg resided in Stuttgart until his flight.

It is astounding that people we have stayed with and met on this journey so far are aware of environmental degradation, alternative health and they go out of their way to experience a returning of the 1970s Age of Aquarius. They are what we call today ‘bio people’. There is hope and let’s hope the trend continues.

Thankyou Martin for sharing your world.

That’s the end of this post, Bev and I hope you will stay with us on our journey south. Should you wish to make a comment, please do so and if you want to be alerted each time we do a new post click on FOLLOW.

Before I go, a Stuttgart oddity: A 4WD with a spare can of fuel positioned so the driver can keep watch over it!

1 Response to Observations from the saddle of a bike: Stuttgart Germany