Observations from the saddle of a bike: Milan Italy

PART 10  OBSERVATIONS from the SADDLE of a BIKE

After four enjoyable days in Verona we were unsure where to go next (typical of a true traveller/vagabond) then after consulting the map we decided to take the train to Milan. We visited Milan in 1972 and in Part 2 of Encountering the Past 2014 as a transit train stop on the way to Monterosso in the Cinque Terre but neither of us could remember much about the 1972 visit (Bev thinks we just passed through) and the 2014 visit was so brief we didn’t see much of the city.

Café Panzera, located near the railway station, was all we saw of Milan in 2014 and a stop here on this trip was necessary in order to get our bearings.

The Café Panzera is a very traditional cafe and the owner, a refined old lady, sits by the cash register and takes the money. It is a relatively expensive place to dine but the food is ‘bloody good’ and worthy of a splurge.

There are two dramatic architectural aspects of Milan that stick in my mind, the railway station and the cathedral.

When I look at the railway station I can’t help but think about the fascist dictator Mussolini who was in power at the time of its construction. Why the association: it is said that he wanted the station to reflect his fascist regime. Even though it is a combination of architectural styles including Art Deco and Liberty I consider it more an example of the Totalitarian style. 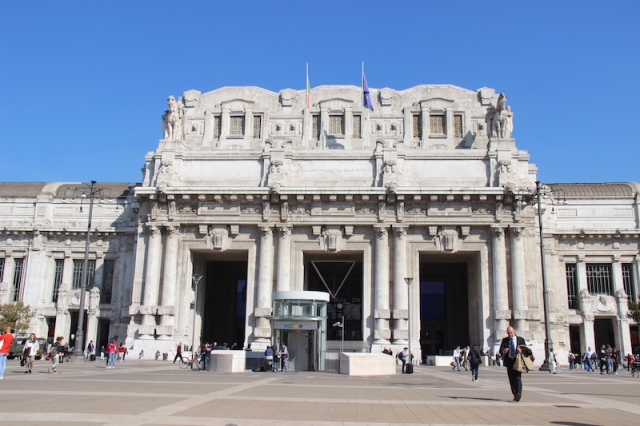 The imposing Milan railway station, with an ill-placed lift exit erected in the middle of the concourse.

Since we visited the Milan railway station in 2014 a circular lift exit structure has been built (middle of the photograph) which detracts from the photographic attributes of the station. However the inside of the station has changed little except to say advertising is encroaching on history.

The full story relating to the Capitoline Wolf and its importance of the foundation myth of the Roman Empire is detailed in Observations from the Saddle of a Bike Post 8, Trieste to Verona. 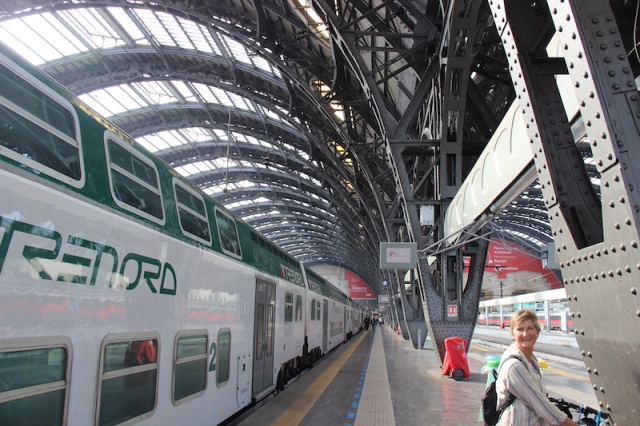 Bev ready to ride, having just alighted from the Verona train.

Regular readers of this blog will know I am enthused about railway stations. What fascinates me is the engineering that is mostly to do with the graceful arches over the railway platforms. When gazing in wonderment at the arches I set my imagination to thinking how men slaved in hot dirty foundries curving the steel and how the workers laboured riveting them together. The station has twenty-four tracks accommodating about 500 trains per day, meaning an annual total of 120 million passengers. 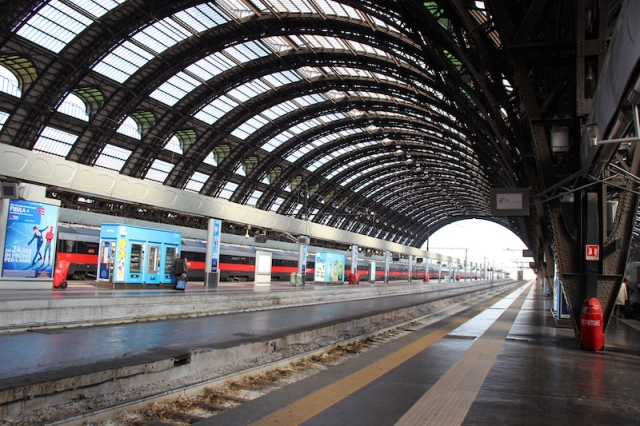 And here are the arches in all their glory, engineered to perfection.

The white powder adjacent to the rails is slaked lime used to neutralise train travellers’ ‘doo’. Some trains in Italy do not confine passenger’s contributions in holding tanks and so the line becomes fouled. Obviously some passengers do not conform to the signs on the trains, ‘Passengers are requested to refrain from using the toilet when the train is at the station‘. The idea is to look up to the arches and not down to the rails.

The station was badly damaged by allied bombings during WW2 so what we see today is a post WW2 rebuild.

A view looking towards the exit. 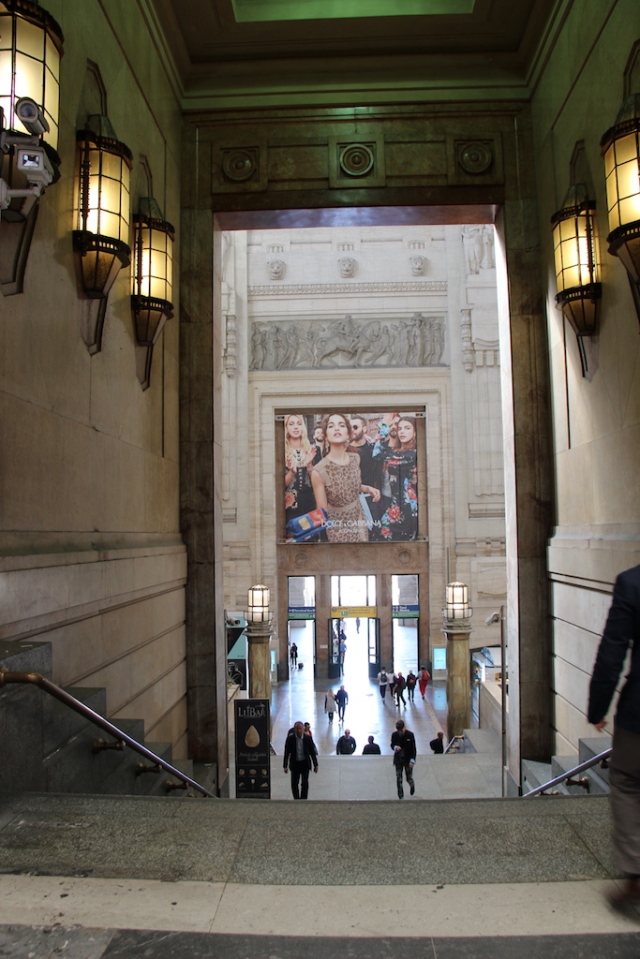 Passengers exiting from the station with an intrusive advertisement overhead.

The religious significance of an inverted cross relates to Saint Peter, one of the twelve apostles of Jesus. St Peter, at his request, was crucified upside down as a sign of humility indicating he was not worthy of the same death as Jesus. 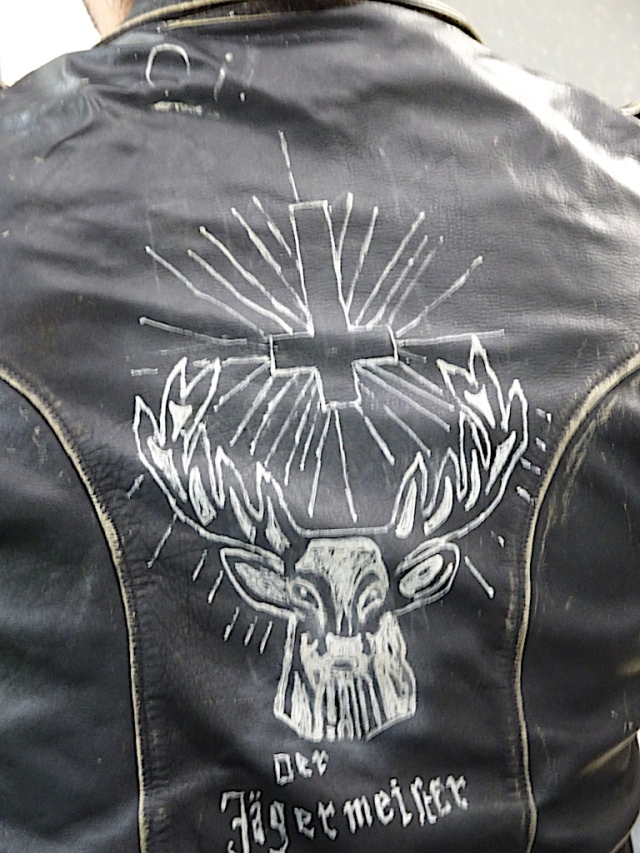 Close up of the upside down cross and deer head.

The significance of the deer head has gained prominence in tattoo art in recent years as the deer can represent nobility, rebirth, peace, love, family and intelligence. It is also the trademark symbol (with the cross up the right way) for Jagermeister, a liqueur used in cocktails. The liqueur is made in Germany and contains up to sixty-five herbs. Jagermeister translates to mean ‘Master Hunter’. I leave it to the reader to interpret what the lad is trying to say to the public via his jacket.

The second architectural aspect of the city is the cathedral, the Grand Duomo and even though we knew we were going to be plagued by tourists it was necessary for us to visit and photograph the outside at least. The generally Gothic Duomo cathedral took almost 600 years to build and is the largest church in Italy and third largest in the world. At one stage, a French engineer was appointed to supervise its construction and he introduced a French Gothic style, Rayonnant, to its construction, a style not typical of Italy. The name Duomo was adopted when it was rebuilt following a fire which destroyed it in 1075. 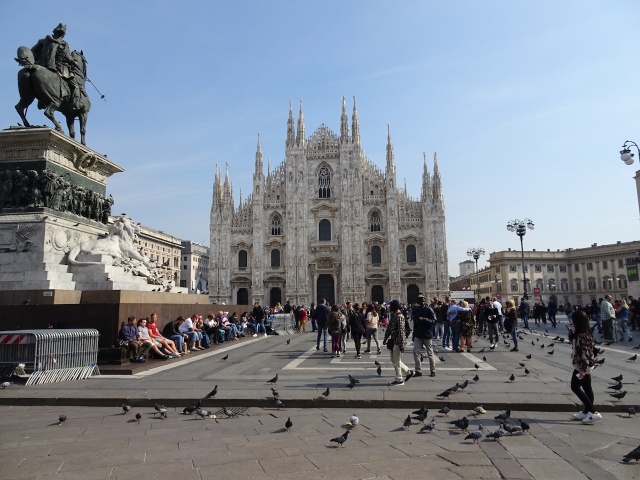 The Duomo, the crowds and the pigeons.

Three of the fifteen statues standing on pedestals atop the Duomo’s finials.

The fifteen Renaissance statues were added in the 16th century and they portray saints, prophets and other figures from the bible. 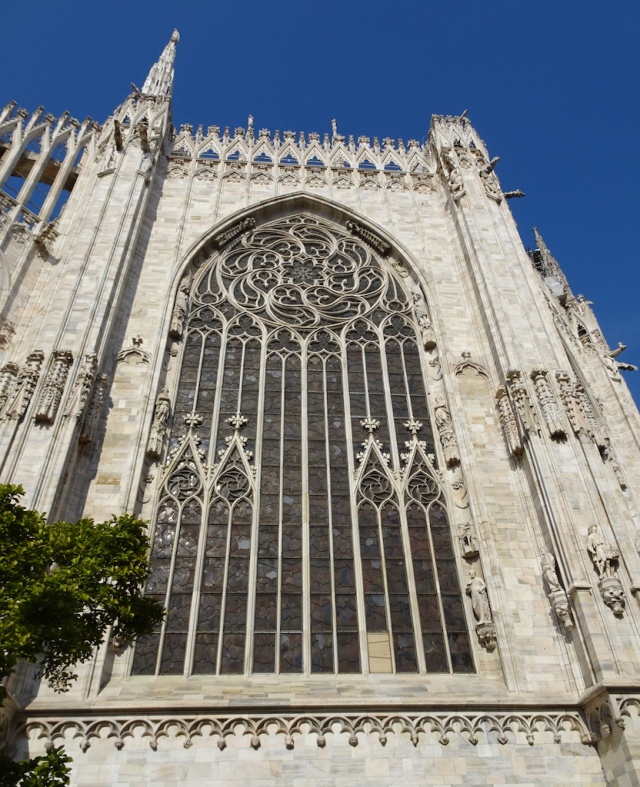 There is no doubt the fine detail of the Duomo is overwhelming and in retrospect we were pleased we decided to make a brief visit to Milan.

Adjacent to the Duomo is another architectural masterpiece, the Galleria Vittorio Emanuele II. The Galleria was built between 1865 and 1877, destroyed during WW2 and rebuilt. Victor Emanuele ll was the first king of the Kingdom of Italy.

The Galleria is Italy’s largest shopping mall and contains a gallery, a five star hotel and a myriad of smaller fashionable boutique shops.   From my observations you need to be fairly well cashed up to shop in the mall as all items, especially fashionable clothing, were very expensive, not the sort of place for shopping if you happen to be a low impact traveller, which is what we consider we are. Low impact travelling means taking action to reduce one’s carbon footprint, for example cooking for oneself and taking trains and buses in lieu of hiring a car or flying.

Flash high impact shoes like the ones above tread the streets of Milan these days. The wearer is not heading for her bike. Girls with shoes like these do not ride bikes.

The entrance to the Galleria Vittorio Emanuele II 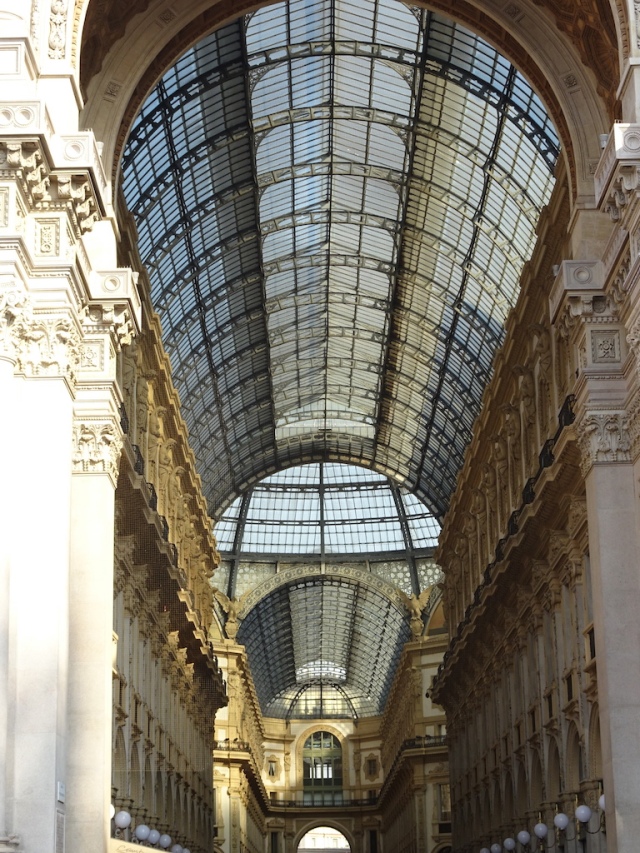 The beautiful steel arches of the Galleria Vittorio Emanuele II.

The historic arched roof was severely damaged during WW2 and since then it has undergone repairs and modifications. Much work was done in 2015 in preparation for the Milano Expo.

A beautiful building and a very popular tourist attraction.

All over Europe to this day there is rebuilding and repairing going on and in Milan we came across an example, a sett layer rebuilding a footpath.

A sett layer on the job.

Setts are squared stone cubes, sometimes erroneously called cobblestones. Cobblestones are water worn river gravel. To date I have not been able to find a source of European setts. I can’t imagine how they are made, they must be squared by machine and if that is the case, how are they held in position for trimming. 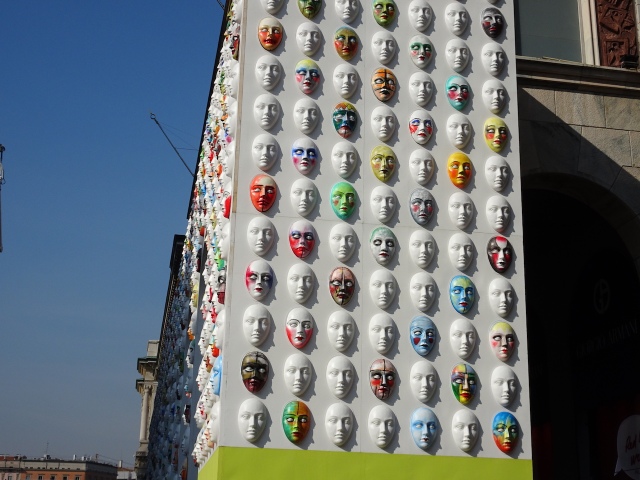 An interesting amusement, artwork of hundreds of faces looking down on the tourists. 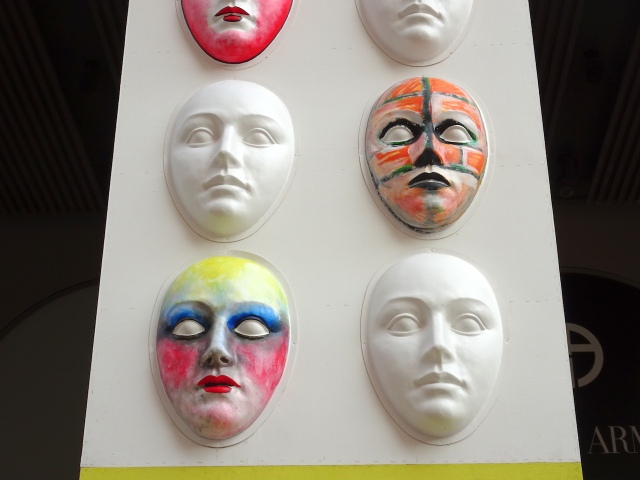 Detail of the faces.

About to leave the low impact Hostel California where we stayed in Milan.

One thing Bev insists on doing when riding is keeping up appearance and she has a nose for Body Shops.

That’s the end of this post, the next post deals with Genova and  San Remo on the Italian Riviera and  Lugano in Switzerland. In 2014 we passed through Genova on the way to the Cinque Terre where there are some amazing villages perched on the edge of cliffs linked by donkey trails. Should you wish to be alerted each time we do a new post click on FOLLOW.

3 Responses to Observations from the saddle of a bike: Milan Italy