The BERNINA PASS and the MORTERATSCH GLACIER

Our next biking trip following our journey to Holland was to Morteratsch near Pontresina in the Swiss Alps. We were to meet up with our Swiss exchange student who lived with us for 12 months in 1995. Her family had hired a caravan at Camping Morteratsch and we were able to pitch our tent next to them.

The four hour train trip from Zurich meant some changes but the final train was the Bernina Express. This train begins its journey at St Moritz and travels across the Swiss Alps descending to Tirano in Italy. The route is the highest transalpine railway in Europe and one of the steepest adhesion railways in the world. The trains pass through 55 tunnels and cross 196 bridges. Built between 1896 and 1904 it is now declared a UNESCO World Heritage site.

Morteratsch station, when built in 1910, was very close to the tongue of the glacier but now it is five kilometres away, necessitating a walk or a bike ride to view it. The first thing to do was not to go to the glacier but to meet up with Rahel and her family at the camping area. 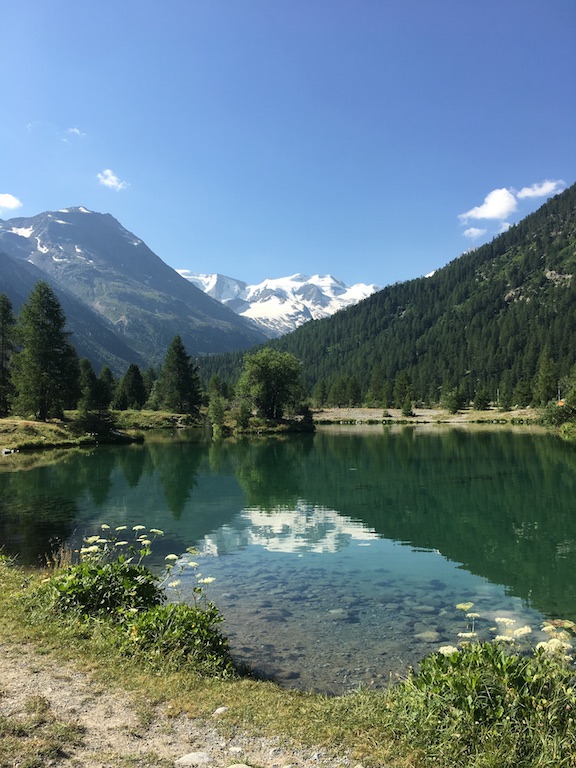 A scenic landscape, a tranquil lake and an impressive forest along the ride to the camping area.

A refreshing cascade along the ride from the station. Oh, what I would give to have a cascade like this one running through our property! 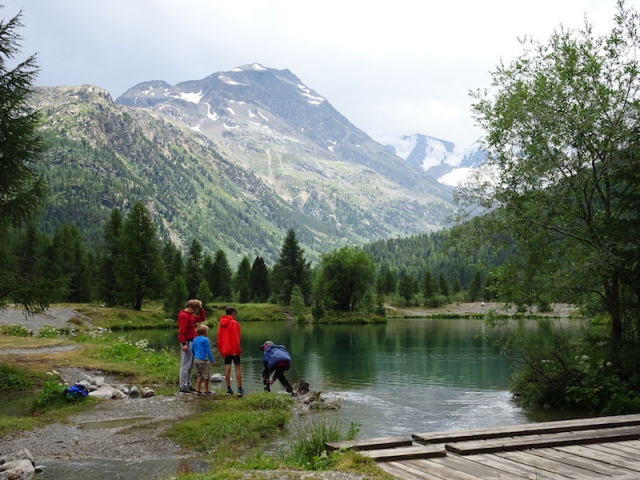 The path into the camping area.

The entrance to Camping Morteratsch. This is an ordinary photograph BUT look at the grain in the vertical plank between the first and second star. It was worth including, just for the sake of the grain.

The camping area was set in larch and pine woods and even though there were hundreds of sites it was the most natural official campsite we have ever stayed in. Tents, camper vans and caravans were hidden in the forest and many sites had a water view. The ride to the camping area from the station was picturesque with cascades, shallow lakes and meandering streams to entertain us and we thought how different it was to most camping areas. The following photograph, even though it has little artistic appeal, shows the extent of the area.

The camping area had a number of anabranches and lakes within its boundaries. The coloured dots indicate cabins, tent and caravan sites.

Our tent and fly sheltering us from the elements.

Minimalist campers on their own private island.

These campers were not so minimalist.

The ‘not so minimalist’ garden on the bumper bar.

A simple and neat caravan: bed in the front, kitchen at the back and a living room tent zipped to the side.

On the first day of our time at Morteratsch we decided to have a leisurely morning and ride to the glacier later, but getting on the road late had disadvantages as we ran into a mass of daytrippers. We decided to return to camp and go early the following day.

Taking the train to Morteratsch station and the walk to the glacier tongue is a major tourist activity and is one of the most frequently undertaken activities in Switzerland. Following the effect of climate change, the glacier has retreated behind a rock shelf and it is not possible to actually see the extent of it from ground level. 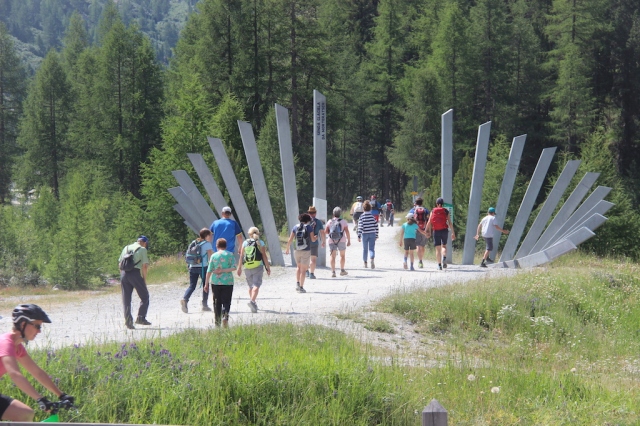 Daytrippers heading for the glacier. In the 1800s the glacier came to this point.

Heading for the glacier early.  Not a soul in sight. 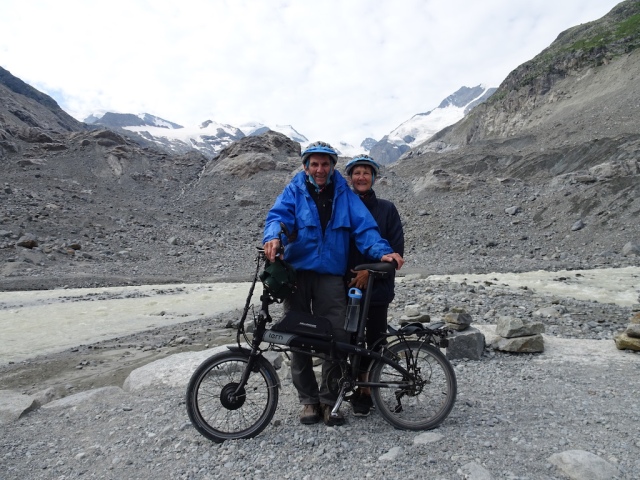 The end of the road, in front of the rock shelf that obscures the glacier.

The best view of the glacier is from above and the following photograph from Wikipedia shows the glacier. 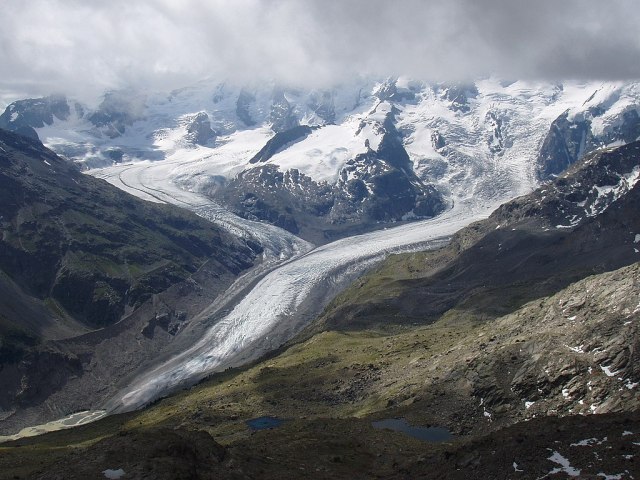 The Morteratsch Glacier, now a shadow of its former self. Image credit:Gunter Seggebang via Wikipedia

The local community, whose livelihoods rely on the glacier to attract visitors, fear further retreat will negatively impact their businesses and the attractiveness of the landscape. A study to investigate the possibility of slowing down the retreat has been commissioned. Results of the survey and recent active experiments have proved successful but they are short term fixes. The only answer is to address global warming on an international scale. It is easy to say but the task is far too great for an individual. However, we can help by doing a number of things and one is to drive less, use public transport and ride a bike, which is why we are riding and taking trains around on this Observations from the Saddle of a Bike odyssey.

To understand how glaciers form and work I have prepared a sketch. Most Australians have never given thought to glaciers, as there are no active ones in Australia. There have been in the past and there are the remnants of one at Rocky Creek not far from where we live in Australia. The Rocky Creek glaciation dates back to the Carboniferous Period 290 million years ago.

SAVING THE MORTERATSCH GLACIER:  One trick that has worked in the past is to cover glaciers with a highly reflective material (like white fleece). This does the job, just like artificial snow would, but it is likely too expensive to do on a large scale. Another thought is to create artificial snow, however that only works if the temperature is near freezing. So regrowing glaciers may only work in places where the temperature is near freezing all through summer. The other problem is ensuring there is a cheap and plentiful source of water to create sufficient snow. Calculations suggest that 4,000 snow machines running each year could grow the Morteratsch glacier by 800 metres within 20 years. Even if this method was employed, it’s likely to be only a short-term solution in a warming world. If such glaciers are to survive the 21st century we will have to reduce greenhouse gas emissions drastically.

The rock shelf and glacier beyond.

The large stones and boulders in the above image are known as glacial erratics, (debris left after the death of the glacier). This is the end of the road.

Glaciologists tend to speak of glaciers as if they are living creatures. Glaciers, they say, grow or die and have good or bad health. The Morteratsch Glacier could be said to be ailing and that is why experiments are being carried out to save it from a slow death. It takes thousands of years for the landscape to regenerate where glaciers once were.

Looking back from whence we came. 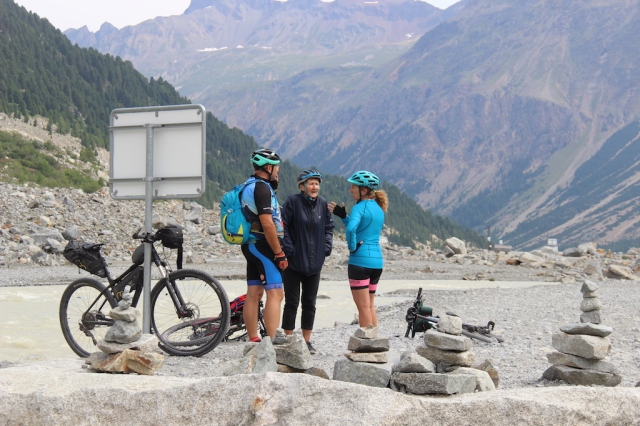 The only other people at the glacier were a Spanish couple who cycled up from Spain to take a look.

The cairns (piles of stones) in the foreground of the previous photograph are, I think, artistic and not official ones. The sign in the photograph below indicates it is illegal to build cairns. Following is a translation of the official sign:

‘In the mountains, cairns are no pieces of art. It is strictly forbidden to build them in hazardous areas such as rockfall territory, irregular watercourses etc’.

The reason for this strictly forbidden sign is that in Europe cairns have been used for centuries to indicate an obscured danger such as a sudden drop or cliff edge. In the case of the Morteratsch Glacier, cairns mark the point where visitors to the glacier should not proceed past, due to possible rock movements.

A sign at the glacier tongue explaining why visitors should not pass this point. Lebensgfahr! translates as mortal danger.

The sun melts the glacial ice supporting the rock pile further up the glacier and rocks can break free, slide down, jump the lower rock pile and hit viewers.

Glaciers aside, another thing the Swiss are famous for is cheese and nearby there is the Alpine Cheese Dairy which is worth visiting. The cheeses are made over an open fire and often visitors are invited to give the brew a stir.

The cheese brewing over an open fire. 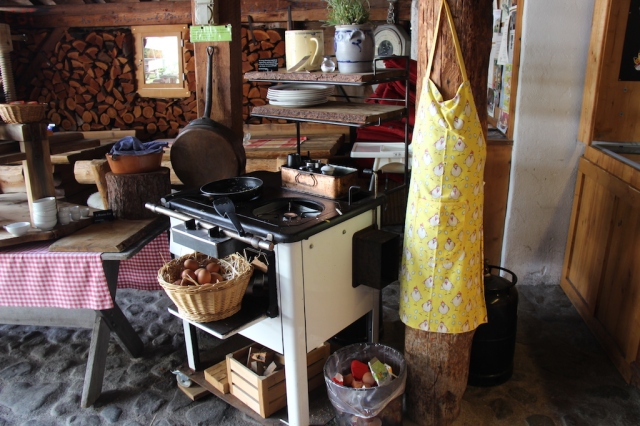 The ‘cook yourself an egg’ facility at the Alpine Cheese Dairy.

It is worth having a go at the smoked curd cheese, smoked alpine sausage and alpine butter. Toss in any number of breads, honey and jam with a coffee and you have the ultimate Swiss food experience.

A window in a wall of wood at the Alpine Cheese Dairy.

A popular hiking trail from Morteratsch is following the route of the Bernina Express where it travels over the Bernina Pass and descends into a valley on the Italian side of the pass. The highest point on the pass is Alp Gruem. We undertook this walk with our friends and it was strange not to be on our bikes. The scenery was pure alpine with towering mountains dotted with snow. 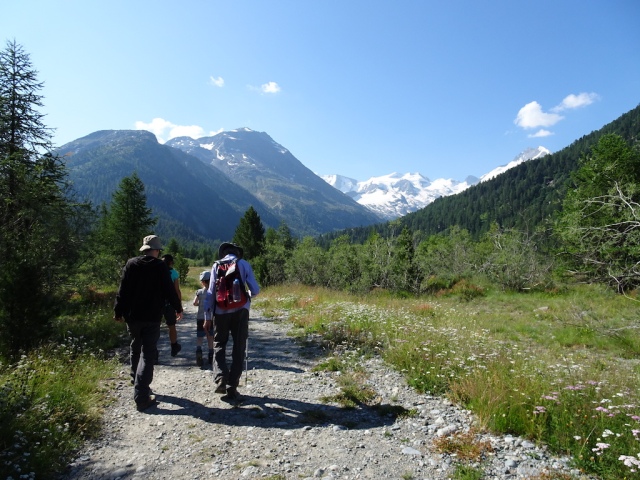 Heading off on a day walk in the Bernina mountains.

In the Bernina mountains.

Looking down on Alp Gruem station and up to the Palu Glacier.

The Bernina Express chases its tail on a loop near Alp Gruem.

The term ‘loop’ is often used for a railway that curves back forming a horseshoe curve. If the railway crosses itself it forms a spiral or helix. A helix or spiral avoids the need for zigzags where trains have to stop and reverse into the zigs and zags.

That’s the end of this post. I trust the reader is more glacier aware and mindful of the effects of climate change on them. Leave a comment if you wish and remember:

‘We have a single mission: to protect and hand on the planet to the next generation’. Francois Hollande President of France from 2012 to 2017.

It's been said that I know a little bit about a lot of things and a lot about little things. I hope I can share some of this knowledge with you as we travel.
View all posts by tbeartravels →
This entry was posted in Odyssey#6 2019 Wandering in Europe. Bookmark the permalink.

2 Responses to Tripping in Switzerland