As I write (6-00am) it is still raining. It rained all night and I’m glad we decided to put our tent up.  I’m also glad we are not back down the track travelling on unsealed roads as rain like we had last night would make driving a nightmare. The only disadvantage of rain at this time is the kayak trailer is covered with a thick layer of dust that has turned to mud. Fortunately we are camped on a high grassy spot so when I crawl out of the tent this morning I will not have to contend with mud under foot.

Now we are getting closer to Darwin I am thinking about what has to be done in the next few days. One job as soon as we get to Darwin is to pack a pallet with the boxes of pottery gear we have brought from Moonbi and take it to the barge wharf.  Barges from Darwin sail to a myriad of islands around the coasts of Arnhem Land, delivering every imaginable item to far-flung communities and mining operations including the BHP Billiton manganese mine on Groote.  The barge to Groote Eylandt takes five days and because I want to set up pottery as soon as I get to the island I am anxious to get to Darwin and start packing.

Decided to stay another night at this camp as we didn’t fancy packing wet gear up and, anyway, I wanted to catch up on the writing of this blog.  In the past when we take a site in a caravan park we mostly stay on unpowered sites but now we take powered sites to satisfy laptop and iPad power requirements.  It is now not uncommon these days to see signs in caravan park camp kitchens, laundries and amenities blocks saying “No charging of phones and laptops. Take a powered site or bring laptops and phones to the office. A small charging fee applies’. How much power is consumed charging a laptop? Are caravan parks running at such a low profit margin that they have to charge? 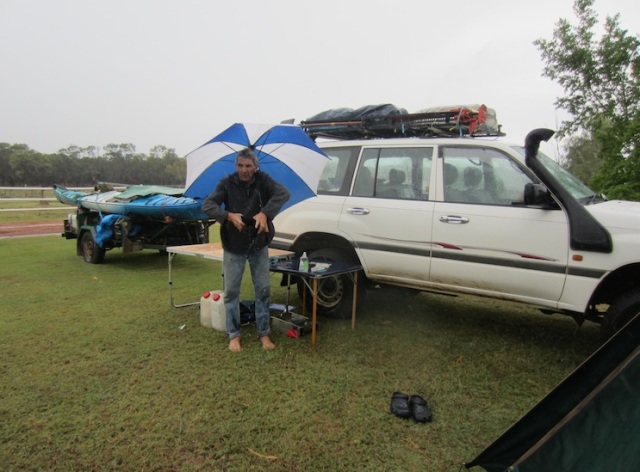 ‘Poor Jenny’ is the resident  guard dog. She is so-called because every year she has a litter of pups and according to the manager, was due anytime. 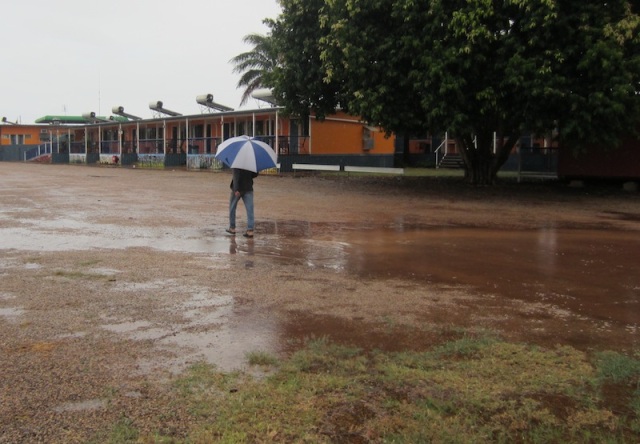 Paddling around the Hi-way Inn

The pub is typical of many isolated outback pubs, nothing to rave about from an architectural point of view but they usually have a lot of character inside.

Our possie by the fire.

Bev and I took a seat by the open fire, swanned and enjoyed the moment.  All of the inside walls and ceilings were adorned with amazingly interesting ‘stuff’.

Adornments over the bar

It is common to see discarded underwear, hats, shoes and boot collections hanging over bars in the back country.  I imagine the circumstances relating to this collection could be quite raucous and I assume alcoholic merriment was involved.

In the beer garden of the pub a game of two-up was in full swing.  It is a tradition for blokes to play this game in Ex servicemen’s clubs on Anzac Day but in remote towns where there is no such venue a pub will suffice. Two-up can only be played on Anzac Day, Victory in the Pacific Day (15 August) and Remembrance Day (11 November but only after noon). The exception to this ruling is Broken Hill where it can be played all year but requires a permit.  The origins of two-up are obscure but there is a belief it is played on Anzac Day because it was popular with WW1 servicemen.

The kip – the board on which the pennies are held prior to tossing them in the air.

The Spinner’ is the bloke who throws the coins into the air.  Players gamble on whether the coins will fall with both (obverse) heads up, both (reverse) tails up, or with one coin a head, and one a tail (known as ‘Odds’).  The game is traditionally played with pennies because their weight, size, and surface design make them ideal for the game. Weight and size make them stable on the ‘kip’ and easy to spin in the air. Decimal coins are generally considered to be too small and light and they don’t ‘fly’ so well. The design of pennies that date pre 1939 had the sovereign’s head on the obverse (front) and the reverse was totally covered in writing making the result very easy and quick to see.

All sorts of oddities were for sale, even the business.

Yesterday when driving the Cape Crawford to Daly Waters road we drew alongside a long distance bike rider and asked if he needed food or water. It is customary for us to do this whenever we come across these brave riders.  We don’t actually stop, as they do not want to lose their forward momentum, just draw up along side of them without stopping.  In answer to our question he said he was ‘ok for everything’. Today the rider in question was at the pub devouring a large lasagne, keeping his fuel tank well topped up, so we were able to swap travel yarns and experiences.  Aaron was from the Gold Coast and  is riding overland to London, not along our overland route of 1970 through Pakistan, Afghanistan and Iran, because of strife in those countries these days, but he is taking a route to the north following the Silk Road.  We were able to tell him what to expect in those parts as we were on part of the Silk Road a few years ago.  Talking with Aaron made me envious, I wished I was going too but this old donkey would not be up to it these days . I now have to be satisfied with Toyota Landcruiser luxury.   Aaron has a blog     aaronkhall.com  if you want to follow his travels.

Damp night ahead but no worries for us, tomorrow we head for Katherine.

It’s the friends you make on a journey, not the miles, that makes the journey worthwhile.