Posted on September 23, 2012 by tbeartravels

Slow start today as we have decided to hang around for another day and go kayaking tomorrow.  The day was spent sightseeing along the coast.  Standing on the coast and looking west there is a lot of water before the next landfall. In fact it’s around 7000 kilometres to the east coast of Africa across the Indian Ocean.  The Indian Ocean is the third largest ocean in the world, the Pacific is the largest and the Atlantic is the second largest. 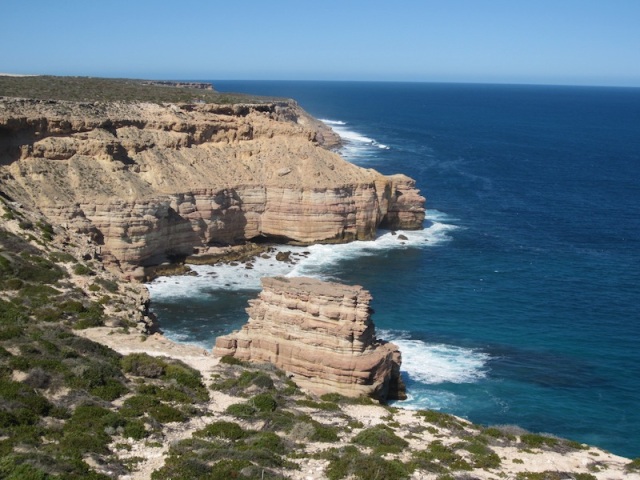 When I see waves crashing against cliffs I imagine how we would fare if we had to land a kayak through the waves. In most places where the waves are of this intensity it would be impossible. An Australian adventurer, Stuart Trueman who successfully kayaked around Australia, found this out and had to stand off cliffs like this and just keep paddling.  An ABC report at the time said, ‘You can’t underestimate the enormity of Stuart Trueman’s achievement. It’s 16,000 kilometres around Australia’s coastline, through searing heat, freezing cold, storms, cyclones, sharks and crocodiles. It would be a gruelling task in a motorboat, but Stuart paddled his kayak every bit of the way over 16 months.

Some of the biggest challenges were from the three 200 kilometre stretches of cliff-lined coast around Australia. To pass these obstacles, Stuart had to paddle non-stop for thirty hours at a time.  In the north of Australia a tiger shark bit the rudder off his five-metre sea kayak. And numerous four-metre-plus crocodiles approached his kayak.’ 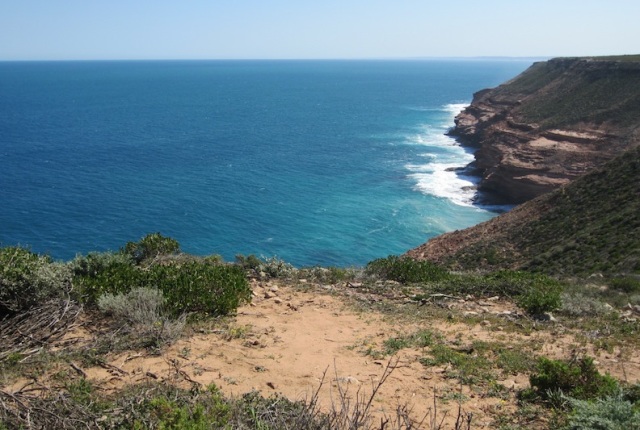 View from Wagoe camp to the west

Windy and cold night but we did OK and slept well.  This morning we paddled out to where the Murchison River runs into the ocean. We thought we might have found quiet water out of the wind behind a protective reef but, not so. It was blowing a gale and we were soon very wet. Turning we paddled back up river and found a spot on the lee side of a casuarina clump and dried out. 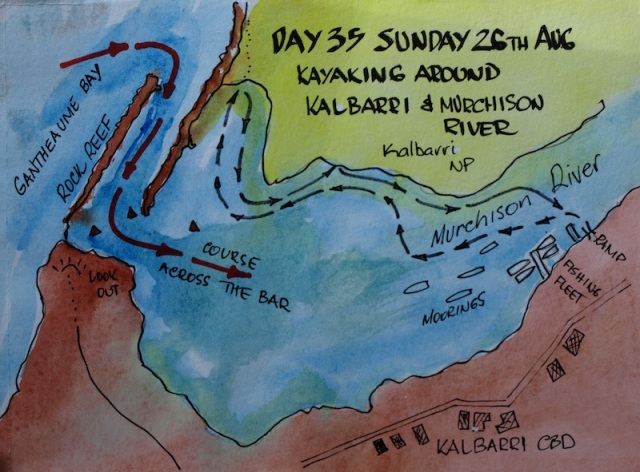 Sand sculptures behind the reef.

Mouth of the Murchison River.
We paddled from the east (right side of photo) to the point in the centre of the photograph.

T Bear travels on the bow. 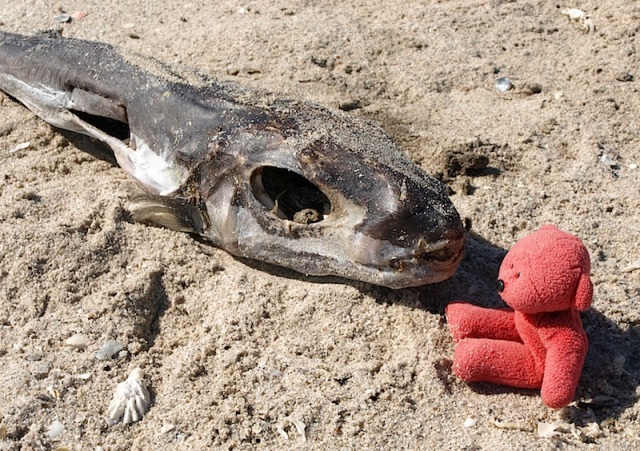 All Australians of my era know not to eat toadfish because they are extremely poisonous. However in Japan people do eat them sometimes with dire consequences. They eat them as a form of Russian roulette; they hope that the chef who is supposed to be an expert in preparing them for the table knows what he is doing.  If he doesn’t, the diner is dead! 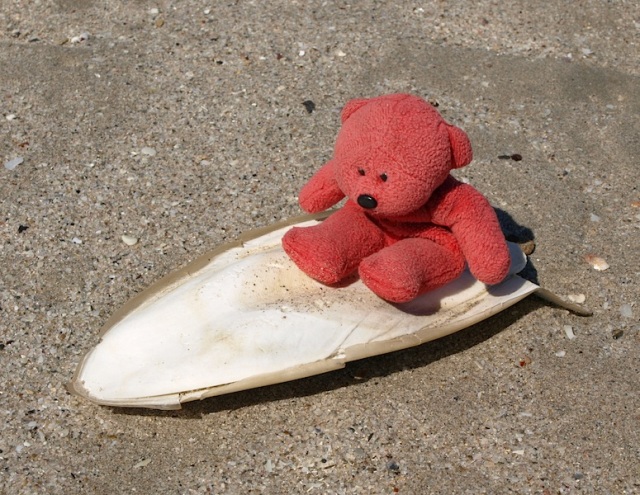 T Bear and his surfboard.

There are cuttle fish, calamari and squid and they all have different backbones.

A bit of a late start this morning as we thought we would take advantage of the wind and sun and air our bedding.  First port of call was an outpost called Port Gregory from where lead was  shipped away for processing.  On the way to Port Gregory we pulled off the main road and took a track to the edge of the Pink Lake.

Beta-carotene is used as a food colouring and as a dietary supplement said to assist with the immobilizing of free radicals drifting around in our bodies that may cause cancers in various forms.  The word ‘carrot’ is derived from the Latin ‘carotene’, so you’ve guessed it, carotene in its natural form comes from carrots and other yellow, red and green fruits and vegetables.  When Bev and I were standing on the edge of the lake I tasted the water and it was extremely salty.  I said all we need to complete the picture is a flock of flamingos and after researching carotene I now know that the reason flamingos are pink/red is because they eat red carotene algae.  If you take red carotene out of their diets they go white.

Having no need to dwell at Port Gregory we moved south to Northampton, claimed to be the most historic town in WA and I’m inclined to agree as there were some old stone buildings there around which I felt very comfortable.

The building style has a mixture of Gothic and Byzantine features. The irregular-shaped stones used in its construction are ‘rough hammer dressed’, something you do not often see.  I doubt if we will see another building of this style during our present odyssey.

Bell tower on Our Lady in Ara Coeli Church

In the local guide to Northhampton there are accolades for the architect who designed this church but none for the stonemason who executed this marvellous building.  Sometimes stonemasons left their signature and they did it by arranging a series of stones in a wall in a specific pattern. I couldn’t find any on this one but I will attempt to find you an example of a stonemason’s signature in a wall in Europe somewhere. 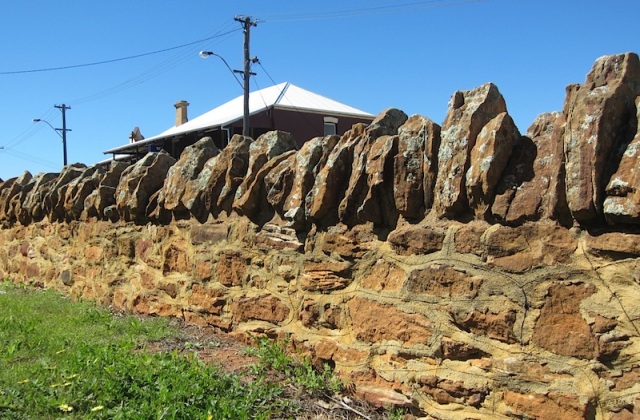 Capping stones were arranged in the vertical like this as a deterrent to animals and humans from jumping over the fence.  Modern versions include razor wire or broken bottles set in concrete. 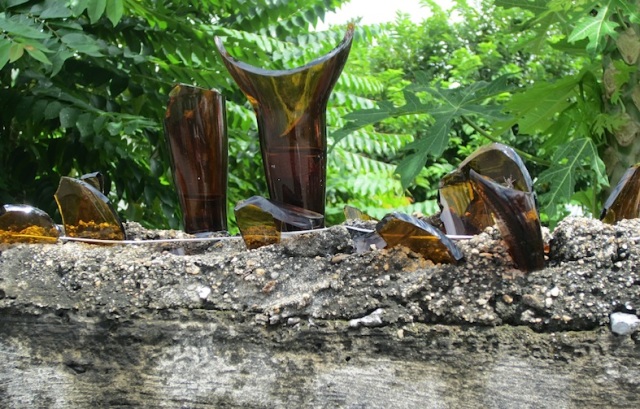 There are a number of small holiday towns along the coast towards Geraldton but we didn’t go in because usually a wind surfer icon at the intersections mean it must be windy and wind is something we are trying to avoid.  Made a brief stop in Geraldton. It’s a cross between Hobart, Launceston and Newcastle and like many older towns in WA it’s undergoing a face-lift and as well there are a lot of new buildings going up.  There is a huge multi-storey set of apartments being built along the foreshore.   On the headland opposite the new apartment block is a ship loading facility. I have come to the conclusion that wherever mountains run to the sea the incline continues into the sea and therefore the water is deep, just the place for big ships to come and load.

Driving inland from Geraldton we passed 54 wind generators swishing away.  The only place we have seen more generators in one place was in west China where there were hundreds.

Near the wind farm we asked a local where there might be a free camp and we were directed to Ellendale Pool.  Our actual campsite is not in the official area as there are too many caravans there. We have a private spot away from the mob. Bev spotted a splendid fairy wren, a variegated fairy wren and mallee ringneck parrots at the camp soon after we arrived.

As I write I’m warming my feet by a campfire, a good night coming up.