Posted on September 24, 2012 by tbeartravels 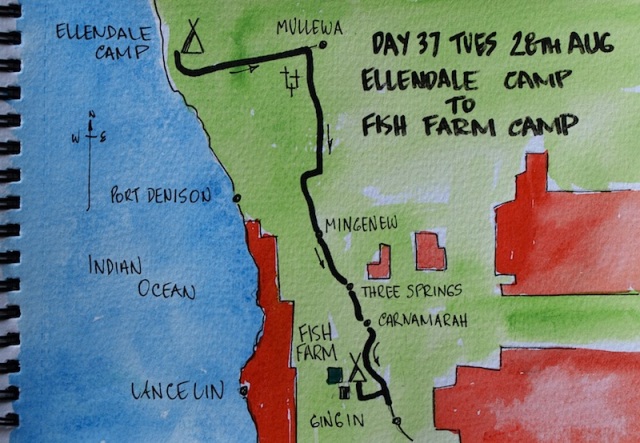 A damp morning again, not from rain but dew. Being near water meant there were a variety of birds coming and going. One perched on the end of a stick protruding from the fire. Unfortunately it didn’t sit for long enough to get a photograph.  Last night and this morning would have been miserable without a fire.  I chose to ignore the general WA roadside signs saying no campfires, because as far as I’m concerned having a campfire and boiling the billy is a tradition for us.  I might point out there was absolutely no chance of a rogue fire starting from a spark from our fire as there was no wind and as well the countryside was green and very wet.

We now have ten days before flying to Thailand. What to do in that period is the question?  Over a lazy breakfast we pondered our next move.  Not wanting to get mixed up with the tourists along the coastal strip we decided to go inland and not cross to the coast until absolutely necessary.  Our decision was to go east into farming country and we are glad we did, as the scenery was picture book stuff.  Wheat, canola and lupins were the main crops, acres upon acres stretching to the horizon, and wildflowers were abundant.

Driving today was idyllic, the road was smooth and the country picturesque, a change from the northern arid landscape.  Managed to get lost, as many roads were not marked on our map.  Had to bring the GPS into play and asked it to point us in the direction of the closest town, Mullewa. We followed the directions and in no time were back on track. 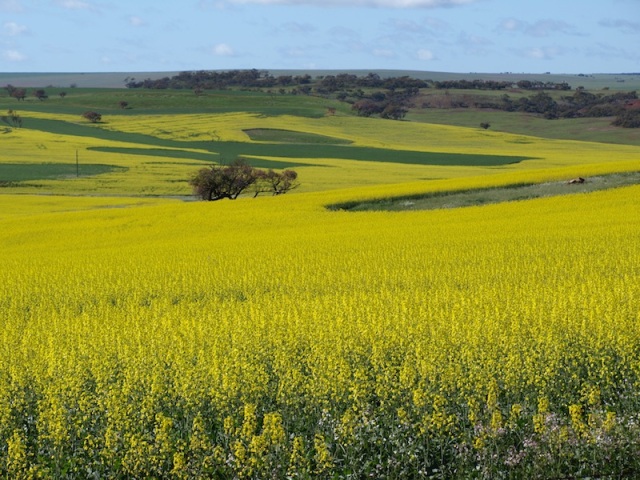 Canola is used mostly as cooking oil or in margarine and to a lesser degree as a stock feed.  Canola is not bad from a beekeeper’s point of view, not that it is a great honey producer but it does flower in winter when nothing else much is in flower.

The following photos are flowers we passed along the way. 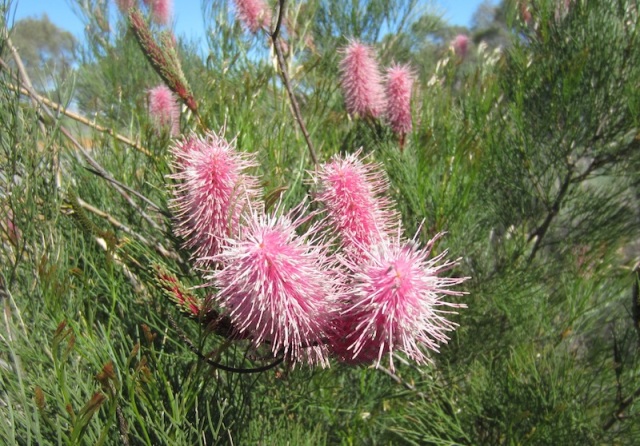 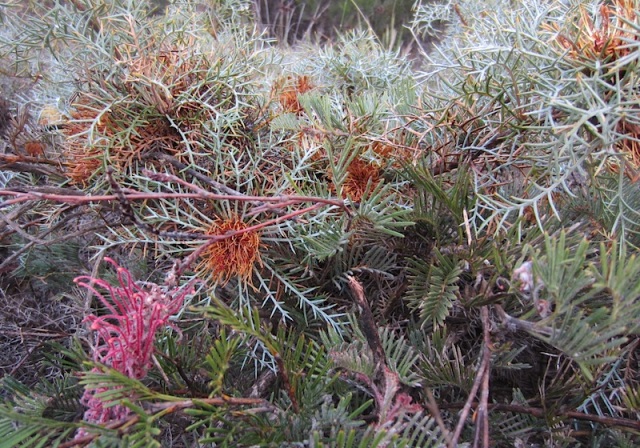 Near the town of Mullewa we had a turn-around experience  when we passed a cemetery. It registered in my mind, like the termite mound south of Kununurra, and I said to Bev we had to go back and have a look. I’m pleased we did.  The graves in the cemetery were decorated with a vast array of ornaments and artificial flowers.  Aboriginal graves on Groote are covered with artificial flowers and ornaments so we came to the conclusion that the graves in the cemetery must be those of Aboriginal people as well.  Many of the graves had beer cans and bottles placed near the headstones.  It was as if the family and friends were involved with ancestor worship similar to that practiced in Asia where food, drink, cigarettes and sometimes money is placed on the grave.

The following images are worth more than a casual glance. Look into each and you will see more than the material, there are spiritual and personal messages in every frame.  Enlarge by clicking the hand icon on each photograph. 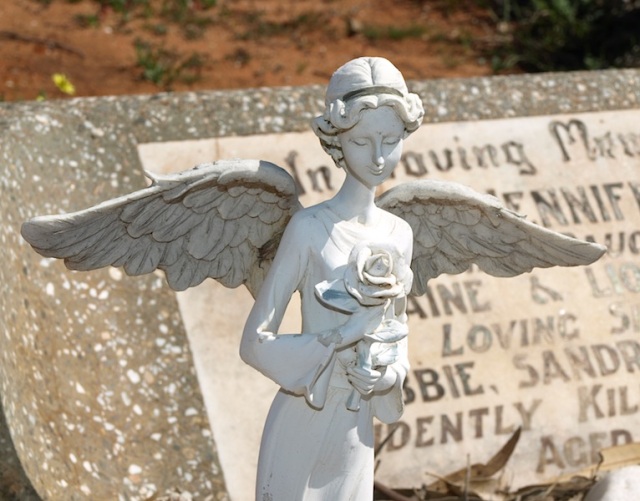 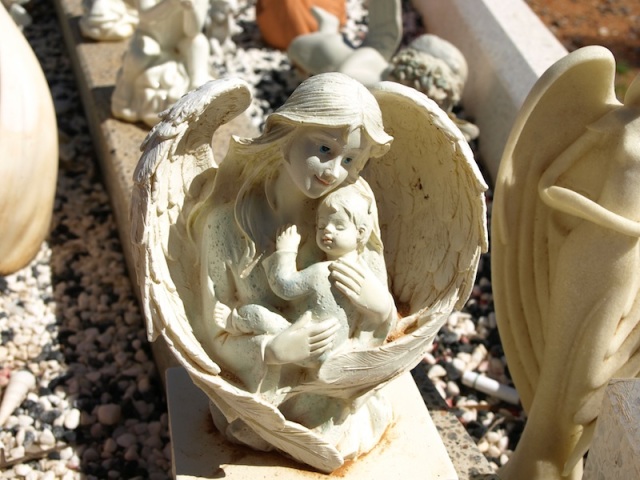 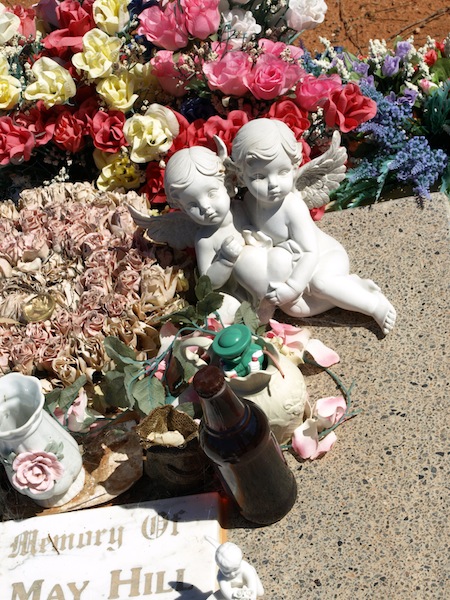 Cuddling cherubs and a bottle of beer 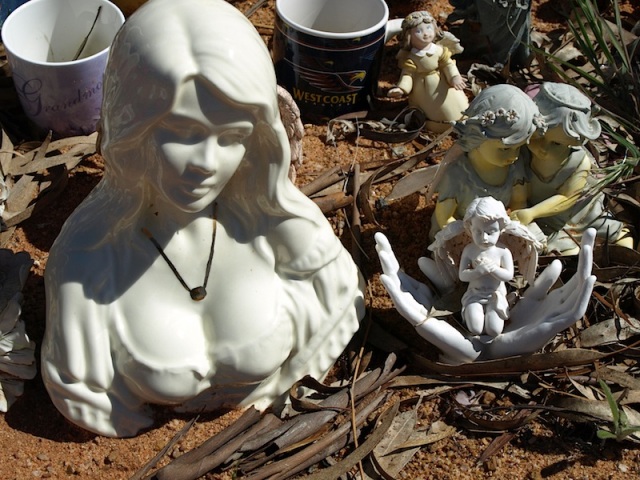 In the background were mugs probably used by the deceased. 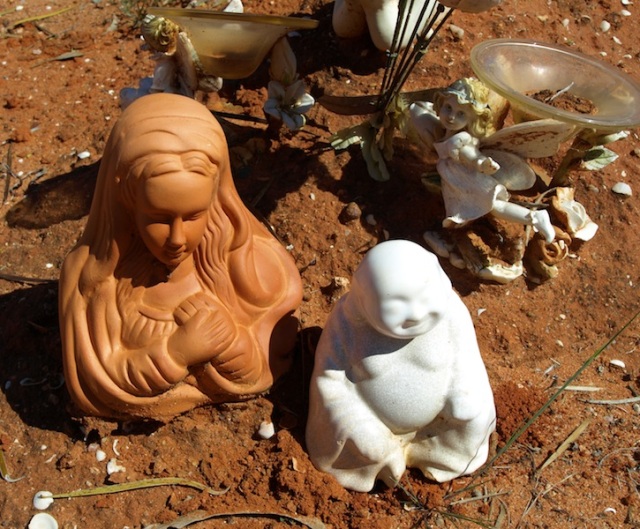 Madonna and Buddha. It’s good to see them working together. 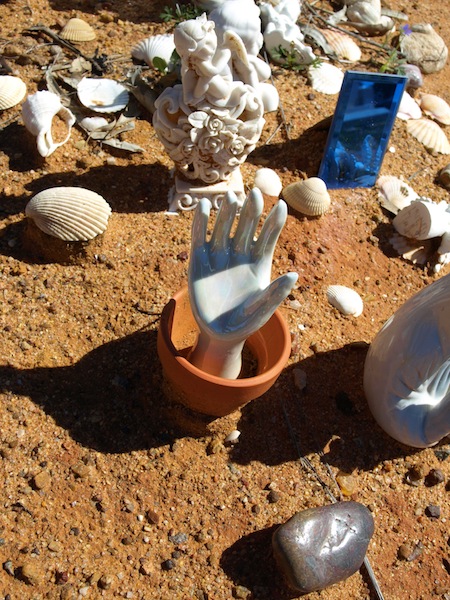 Pleading hand rising from a flowerpot.

Note the mirror. There were a number of graves adorned with mirrors.  In ancient times it was believed that the reflecting and deflecting ability of mirrors (polished silver before glass) kept lost spirits from interfering with deceased spirits moving into the afterlife.  In the above case the colour of the mirror is not silver but blue, which would be more expensive, reflecting the high status of the deceased. 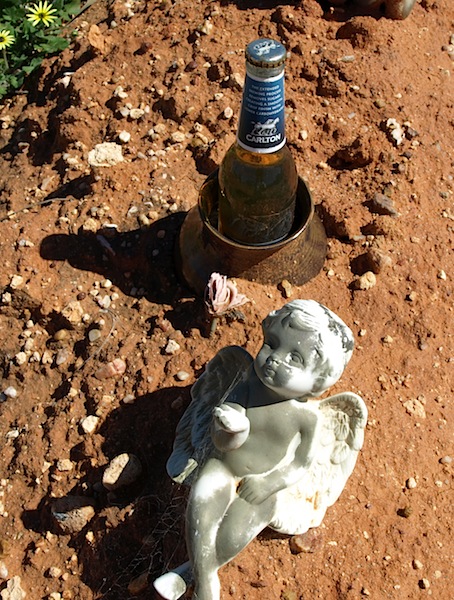 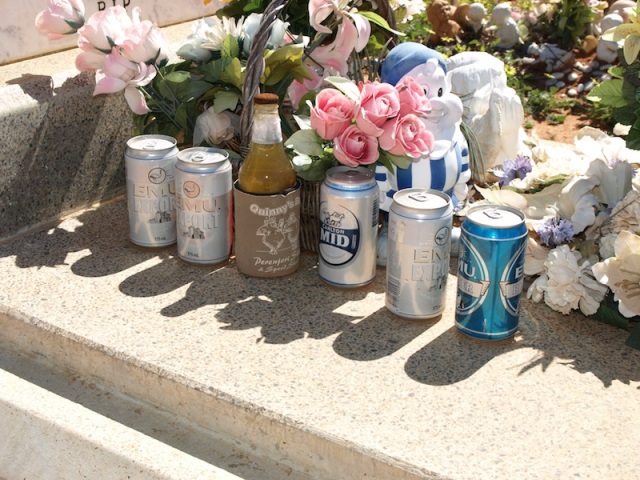 One of the Seven Dwarfs guarding the offerings.

Note the faded labels.  I can only assume that a fresh can/bottle of beer is placed on the grave each year, maybe on the deceased’s birthday. 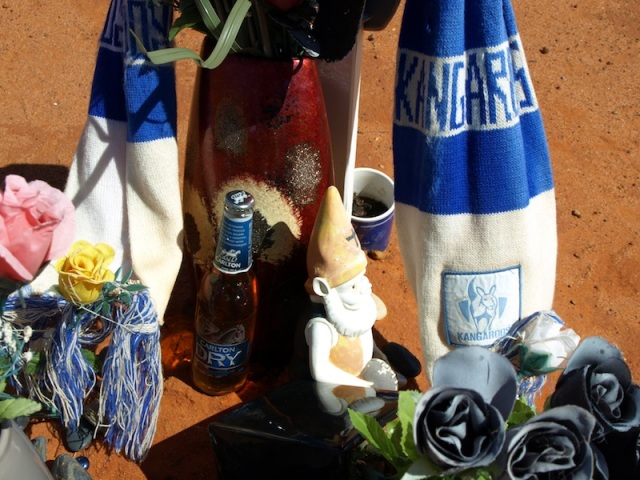 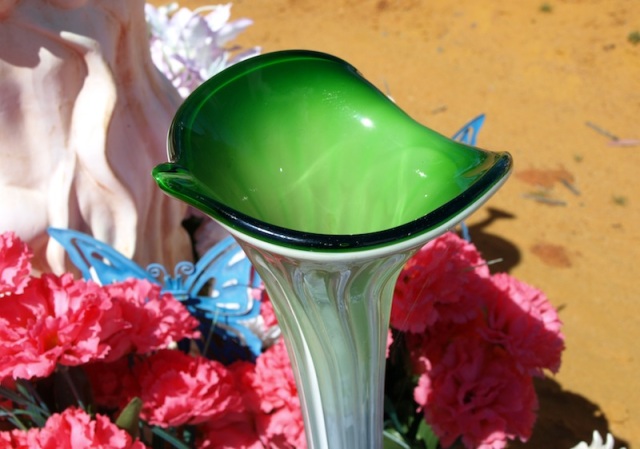 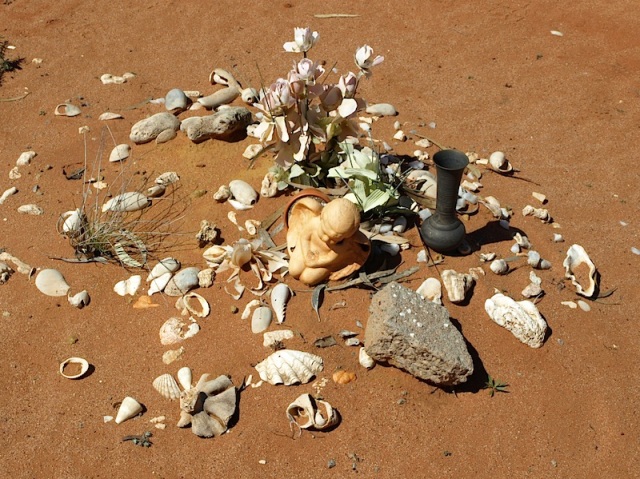 There were many other graves not as elaborately adorned and looking at them one wonders about the circumstances under which the deceased was laid to rest. 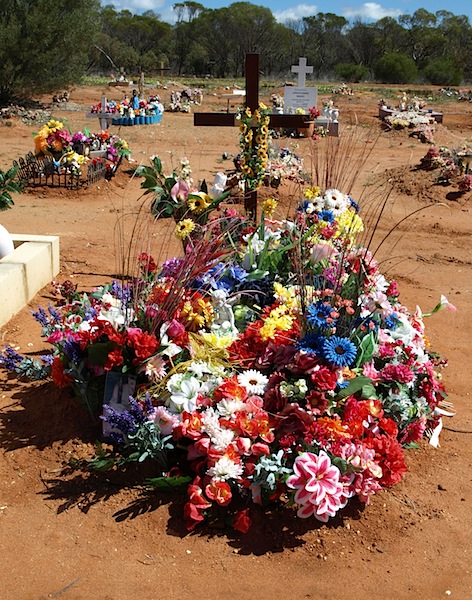 Obviously whoever came to rest here was much loved. 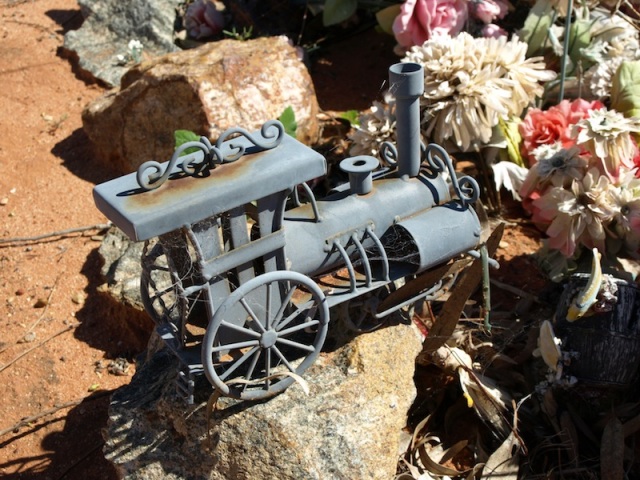 Train at the head of a child’s grave. 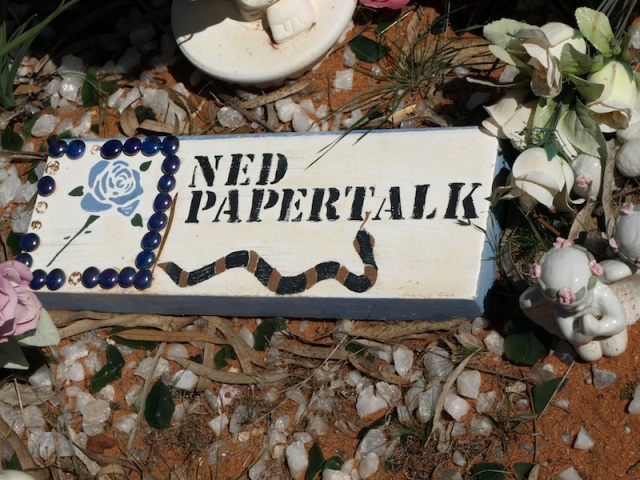 Ned’s plaque. I would love to know how the name Papertalk originated.

Tonight we had every intention of making camp early. We thought maybe we could find some comfortable lodgings or a pleasant grassed camping area where we could hold up for a few days blogging.  Called at three camping areas but they were not suitable as there was no grass, the areas were designed for wheeled travellers only.  Rain came in later in the day and I didn’t relish the thought of putting the tent up so I called into a pub and asked about a room for the night.  The publican showed me a room, I told him I would consult with my wife knowing full well we wouldn’t be staying as the room was dark and smelt of cigarettes.   The cost was a little under $100 and in light of the condition of the room I thought it a tad expensive.

After the pub we headed further south, it began raining heavily and becoming bleaker by the minute.  I suggested that one option open to us would be to sleep in the car. This suggestion didn’t meet with very much enthusiasm so knowing we were not far from friends who we met on Groote Eylandt a couple of year’s back, we decided to give them a ring and take up the offer of staying if ever we were in the district. 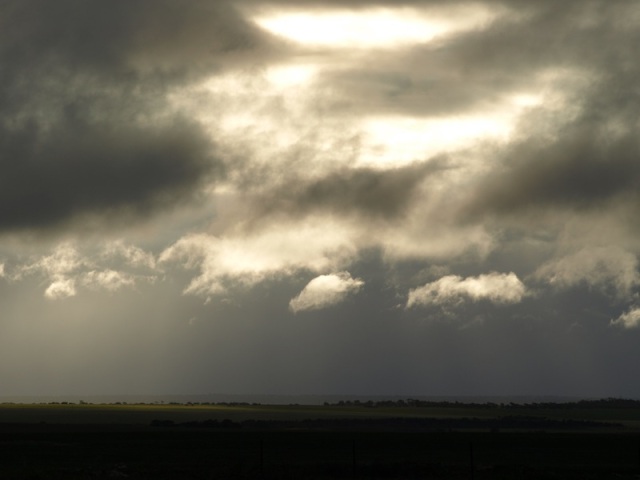 A good night for sleeping under cover.

LAZY DAY AT THE FISH FARM

It was intended to have a lazy day today and that is exactly what we had, even though I started writing at around 3-30am.  I wrote for a couple of hours then settled back into bed at around six and mused over where we have been, going. and where we are.  The reason I have called this camp the Fish Farm camp is that our friends here farm fish and marron (crayfish) for the local and overseas markets. 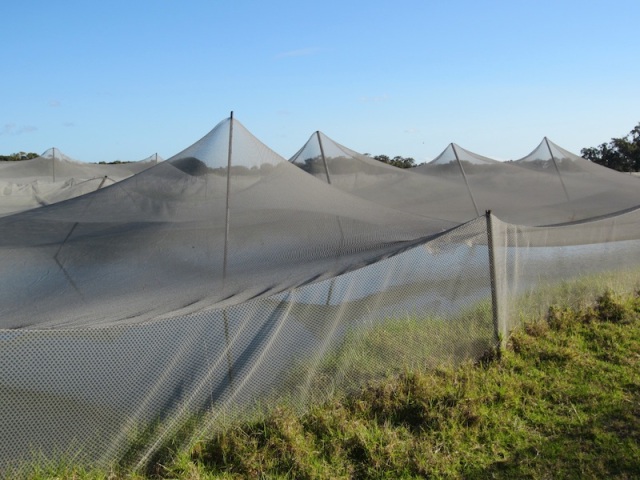 The highlight of the day was to take a walk through a nature reserve that adjoins May and Ray’s place.  The area was declared a nature reserve because of its overall botanical qualities.  Below are some examples of flora and insects in the nature reserve. 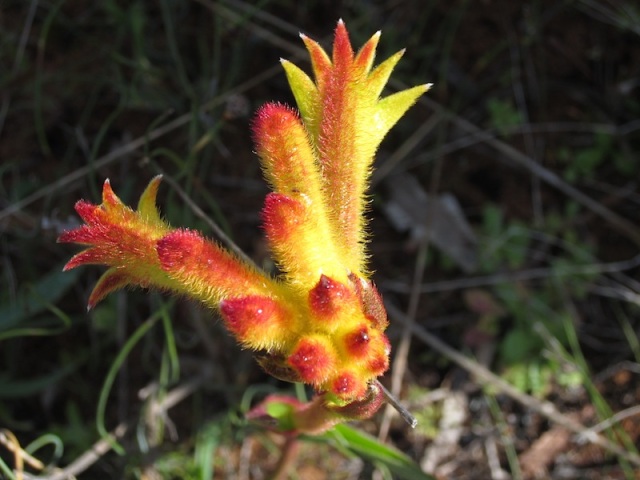 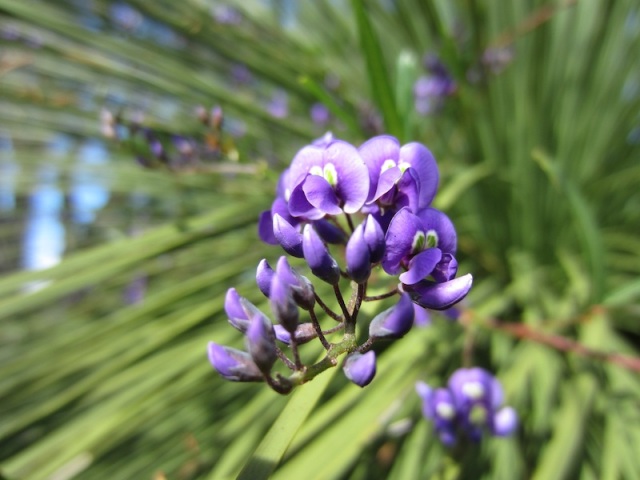 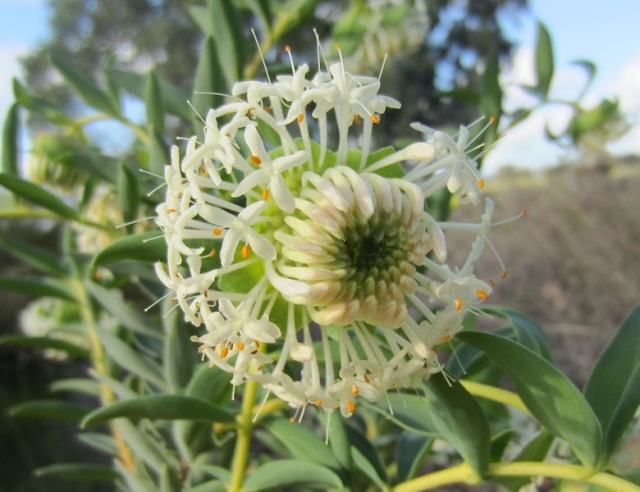 This flower is from the plant in next photo. 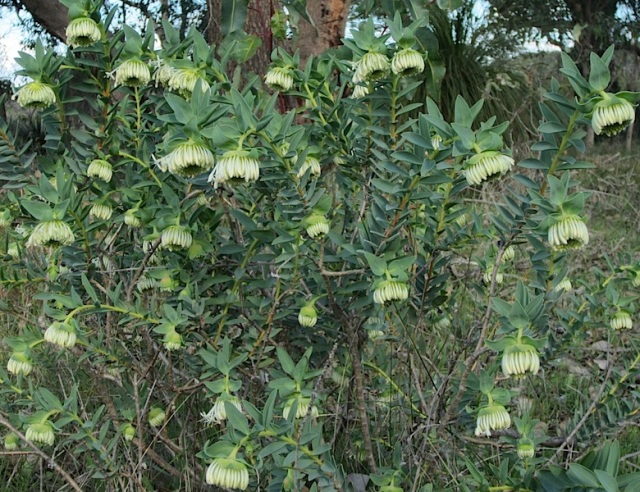 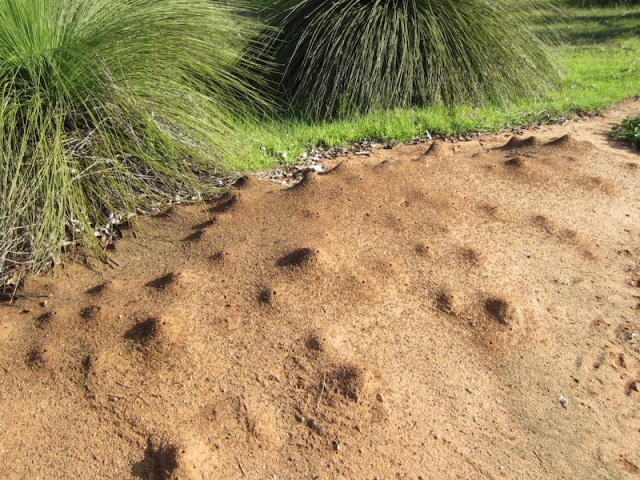 Normally entrance holes in ant nests of this nature are simply holes in a mound but this nest had raised up sections.  Why so? 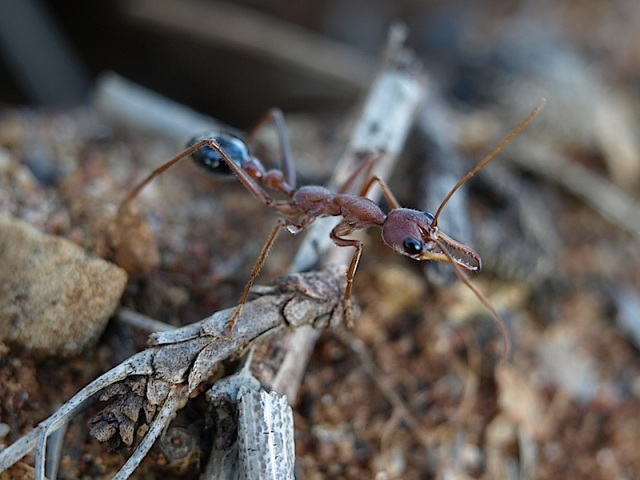 It doesn’t pay to have a close encounter with this species of ant as it is ferocious when defending its nest.  This chap is about 30mm long and would be capable of inflicting a nasty wound. Once this ant latches on the only way to get it off is to drag it off and in the process the head often becomes detached leaving it clamped firmly on your skin.  We have this species of ant on our property.

The weather has cleared so we have decided to go south tomorrow.  Our youngest son, Toby, has friends south of Perth and they have invited us to stay. The invitation sounds very tempting as the weather forecast is for rain and gale force winds.