Porto Venere and our final day in the Cinque Terre

From Monterosso we caught a train to La Spezia passing through the other villages of the Cinque Terre…Vernazza, Corniglia, Manarola and Riomaggiore and then a bus to Campiglia where we began our walk along the coast down to Porto Venere. We could not have asked for a better day. The atmosphere was so clear that we could see the mountains west of Genoa on the Ligurian coast.

In Campiglia, a day so clear that we could see the Italian Alps to the north. 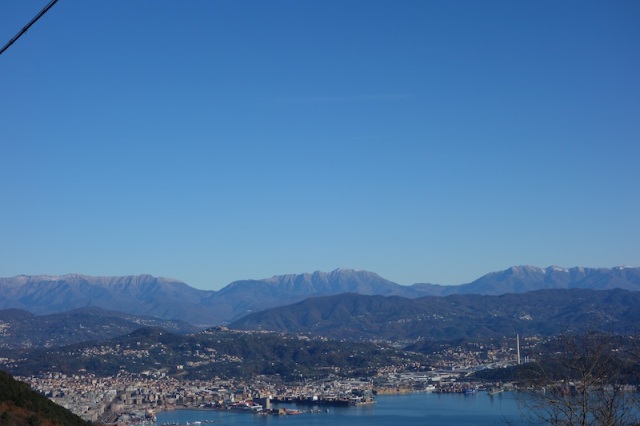 La Spezia and a brilliantly clear blue sky. According to the locals, it is a rare weather event to have a cloudless day like this at this time of year.

La Spezia is located between Genoa and Pisa on the edge of the  Ligurian Sea. It is one of the main Italian military and commercial harbours and hosts the arsenal of the Italian Navy. The big, bustling city of La Spezia is a complete contrast to the surrounding coastal villages and rural hinterland we have visited over the past eight days.  The city sits at the head of the Gulf of La Spezia – also referred to as the Gulf of Poets, after Byron, Dante, DH Lawrence, Shelley, George Sand and others who sought inspiration along the gulf’s shores. 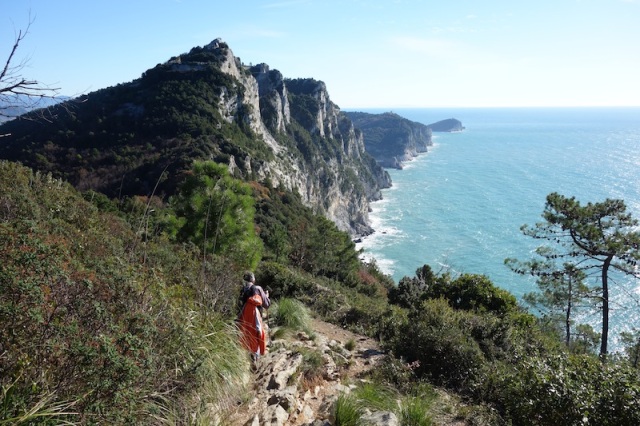 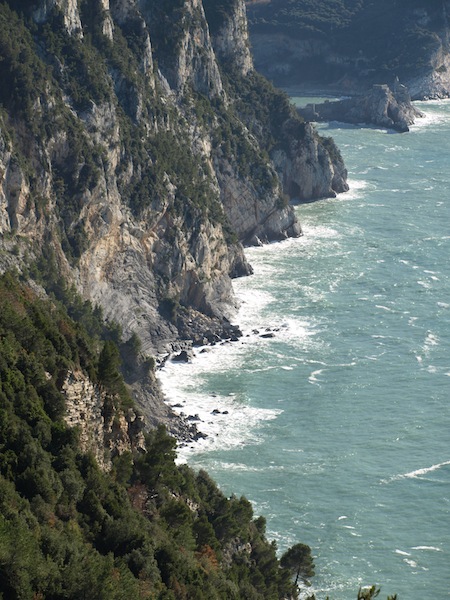 On a number of occasions today we thought we were in the southwest wilderness of Tasmania. 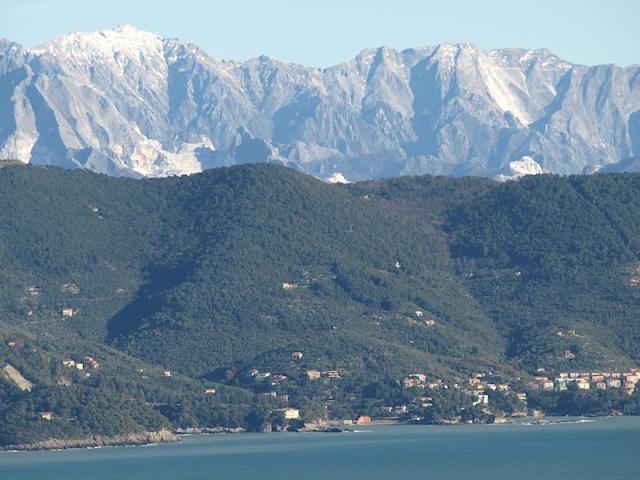 Across the bay from La Spezia. The grey rock formation is limestone and the white on the mountains is white marble, not snow. 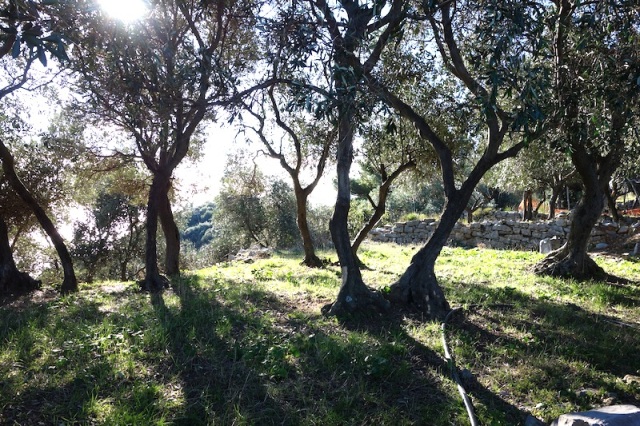 Olive grove on the way down to Porto Venere.

Marble is limestone that has changed its form as a result of heat and pressure.

Abandoned farmer’s house; not beyond restoration, either. I could quite happily set up camp here for a while.

This would be a great spot for a tent  camp.

The end point for our walk today was the UNESCO World Heritage town of Porto Venere.   The old town is entered through an ancient city gate. 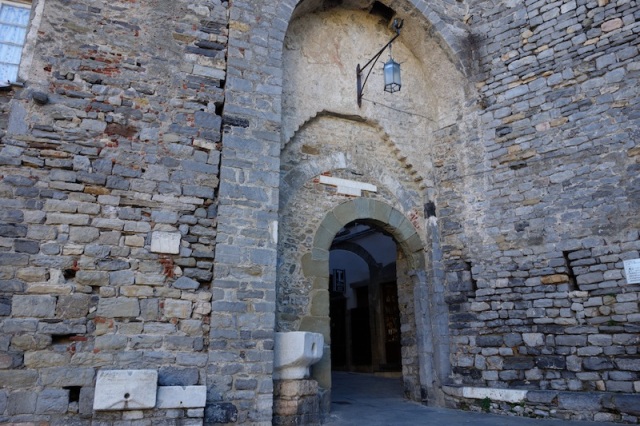 The town of Porto Venere dates back to the medieval period (5th to 15th cent) and sits on a rocky spur surrounded by a fortified wall.  As has been the case with similar towns we have visited during our odyssey, every square metre has been built on, resulting in narrow passageways running every which way.

Porto Venere’s harbour is lined with restaurants, cafes and brightly coloured houses. Between the houses narrow passageways lead up a hill to a castle and the picturesque San Pietro (St Peters) Church.

Church of San Pietro and fortifications at the end of the town.

The Church of San Pietro is built on top of the temple to Venus (Venere in Italian) from which Porto Venere gets its name. Nearby is Byron’s Cave where the poet Byron used to swim.  Lord Byron (1788-1824) was an English poet and a leading figure in the Romantic Movement.The Romantic Movement (late 18th and early 19th centuries) was an era where literature and art celebrated nature rather than civilization. Romanticism valued imagination and emotion over rationality.

Cliffs below San Pietro church and the fortress walls. 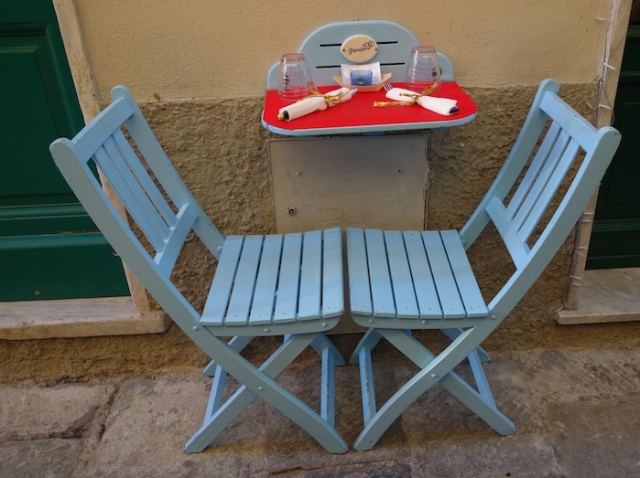 Café sign. Great lettering style. From the cultural dictionary ‘de gustibus non disputandum est’ translates literally as ‘in matters of taste there is no dispute’. 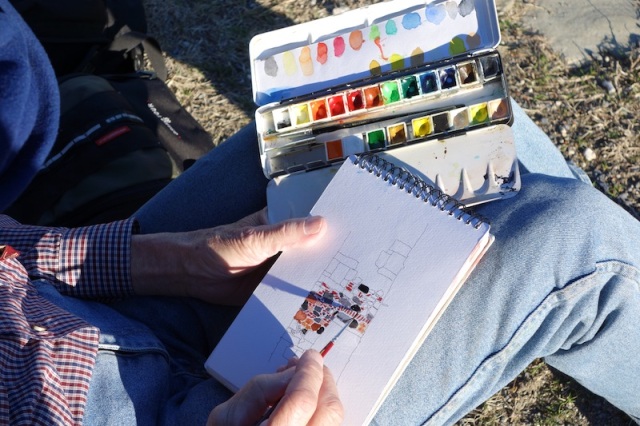 Today I sat in public painting. For me, painting is a form of meditation.

When I sit and paint in public people come and watch. This is good as it means you have an excuse to strike up a conversation.  Today a young mother talked with me and as she did she went to great lengths to explain what I was doing to her children.  In this age of digital cameras and computer graphics there is a generation that has never seen someone like me actually do something with their hands.

The subject of my painting. Isn’t it just something? Beats the Australian ugliness; cream bricks.

A stylish tourist admiring another piece of rock art.

The lady with style and her inappropriate footware for the cobblestone paths of Porto Venere.

Wearing high-heeled shoes like this has a detrimental effect on the whole of the body.  If wearers of such shoes researched the problems they would soon have them off and be chucking them over the castle wall.

Tomorrow is our last day in the Cinque Terre and I think the plan is to stay close to Monterosso.

Today was warm and sunny and even though it would have been a good day to go walking the donkey trails Bev and I decided to stay close to Monterosso.

Just on sunrise we walked above the town and, looking down, I realised why the 2011 floodwaters and mudslides enveloped the town.  Running through the centre of the town is a creek that over the years has had its profile altered thus raising flood heights.

The creek in tunnel form is under the boardwalk.

During times of average rains the covered creek is capable of carrying water flow but when a once in a hundred year storm occurs the tunnel battles to cope, especially if debris has blocked the profile. When the tunnel/creek reaches full capacity I assume the wooden roadway lifts (like an automatic floodgate) and water then flows down the street. 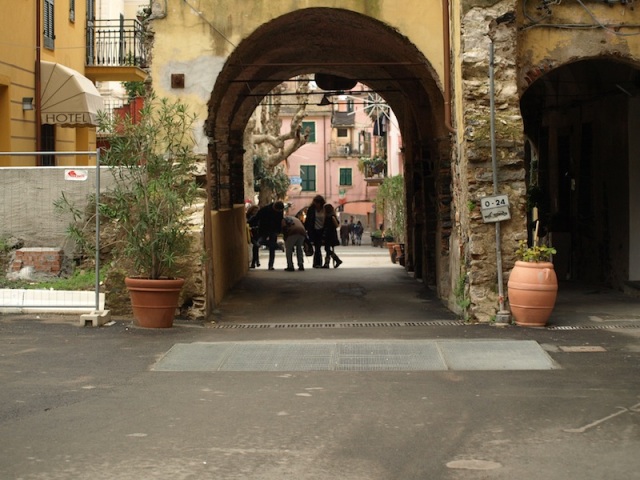 There is a creek  under this archway. 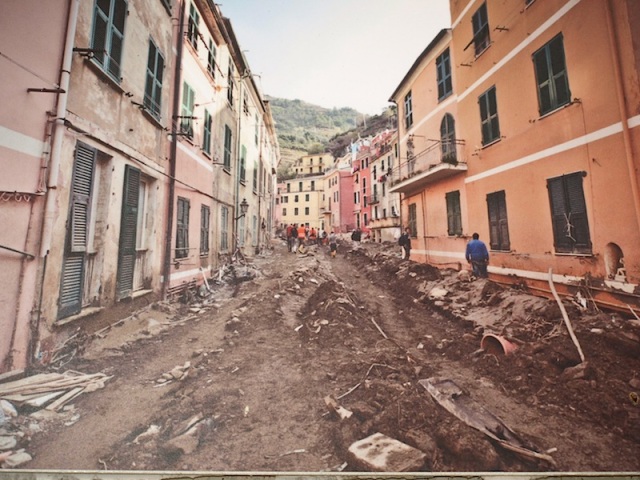 Other villages in the Cinque Terre suffer a similar fate in times of high run-off. 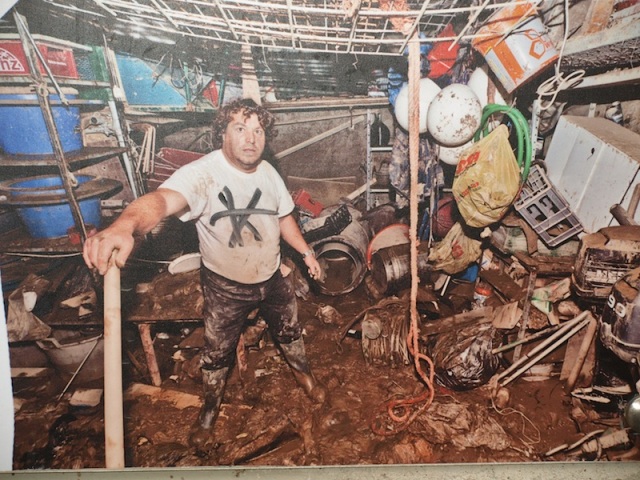 Clean up after a flood. 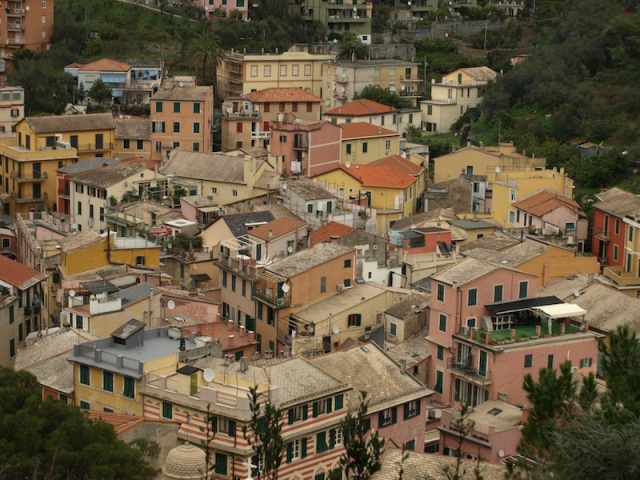 Monterosso old town. The creek flows under and through the town.

Monterosso beach. The tunnel/creek discharges into the sea at the left end of the beach.

Well-manicured and cleared catchment areas like this means run-off water travels at speed into the creek.

At morning teatime we went to the internet café Cantina del Pescatore and posted part one of the Munich story and because it was a long one we stayed on for lunch.  Late evening we went up a hill to the south east of the town for a sunset viewing.  We stood at the edge of a cliff and being elevated with basically the sea at our feet (100m down, though) we felt like we were standing on air.

Tomorrow we  catch the 7-00am train to Milan where we change trains for Bern.  After a few days in Bern we go to Rebstein to farewell our friends there then to a village near Zurich to meet with Rolf and Erika and their girls.  As of yet I haven’t told their story but I will over the coming days.  Their story and how we met is intriguing so stay tuned.