After spending some additional days in Bern with our Swiss family we revisited Rebstein and St Gallen for farewells then set forth to Zurich to say hello and goodbye to the last of our Swiss friends, Rolf, Erika and their daughters.

Our first meeting with Rolf and Erika was in 1990 and, as has been the case with our other Swiss friends, the story of how we met is worth relating.

Rolf and Erica were on a biking expedition through India and around Australia and I happened to spot them as they were preparing to sleep in our local village park. They looked a little travel weary so I invited them home and settled them into our ‘shack’, a small cottage I built specifically to accommodate weary travellers. 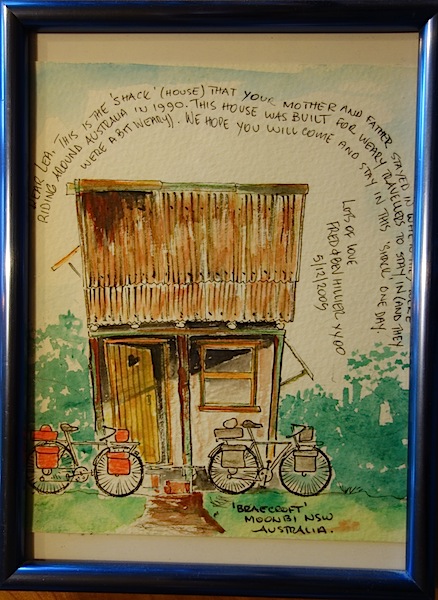 A painting of the ‘shack’ in which Rolf and Erika stayed in 1990. This drawing I did for them now hangs in pride of place reminding them of their epic journey.

Their riding in Australia was extensive as they zigzagged about, not satisfied to simply ride from city to city. Readers who have who have taken to the road on a bike know well that weight is the first consideration. Certain things have to be left at home and in Rolf and Erika’s case it was a camera.  Cameras in the 1990s were heavy lumps using film, not lightweight digital like they are today.  The following photo is the one and only taken on their epic journey.

Erika and Rolf on the road. This photograph was taken in 1990 by a passing traveller near Tennant Creek N.T. Australia.

By the time they reached our locality they had done a little over 20 000 kilometres and worn out seven sets of tyres.  After ten days of rest and Bev’s good tucker they moved on.  Their plan was, if I remember correctly (correct me if I’m wrong, Rolf) to ride to Sydney, fly to Buenos Aires in Argentina and ride from the bottom of south America to Alaska.   Their plans were thwarted as Erika fell pregnant which meant a quick return to Switzerland. Back in Switzerland they settled into domestic life, raising two girls, Lea and Nina.

Erika, Rolf and their two girls, Nina and Lea.

When the time came for Rolf and Erika to leave our property our youngest son Toby (12 at the time) said he wanted to go with them (at least as far as Sydney) so we bought him a microlight tent, made sure his bike was in order and the three of them set off south towards Sydney.  It was mid summer and not the best time for being on the road however, according to Rolf and Erika, Toby was out front for most of the four hundred-kilometre ride from Tamworth to Newcastle (a city to the north of Sydney).  Near Newcastle Rolf veered off course, hit a plastic guidepost and bent it.  It was still leaning the last time we drove by!

When Bev and I were in Switzerland in 2005/6 visiting Rolf and Erika we asked Lea, the baby who necessitated the abandonment of the south American section of their trip, if she would like to come to Australia (she was 14 at the time) to see the bent guide post. She accepted and with a girlfriend they came and we took them camping, whale watching and general sightseeing.  It was a joy to show the girls our part of Australia and, as is often the case with youngsters of that age, the trip to Australia was character and confidence building.

Rolf is still into bikes and forever will be; bikes are who he is.  Rolf recently retired from competitive riding but he still goes riding in the remoter parts of Europe.  I think he is biding his time whilst waiting for the girls to finish their studies and then he will be ‘on the road’, pedalling to some remote part of the world.  Erika these days is not so active on the bikes but with a little gentle persuasion from Rolf she will be pedalling again.  They do have a trip planned this year to ride from Zurich to Amsterdam, about eight hundred kilometres.

Rolf’s bike collection in the attic of their house. Note the size of the timbers in the roof.

These days Rolf spends a lot of time resurrecting old bikes. He goes around picking up abandoned bikes and bringing them home for a little love and care, like some people care for abandoned animals.

If Bev and I needed a couple of bikes to tour Europe I think we would start from Rolf and Erika’s place as I’m sure he would lend us a couple of his charges.

Vintage bike in the yard of Rolf and Erika’s house.

Sir Arthur Conan Doyle (1859 –1930), the Scottish physician and writer, most noted for his stories about the detective Sherlock Holmes said: ‘When the spirits are low, when the day appears dark, when work becomes monotonous, when hope hardly seems worth having, just mount a bicycle and go out for a spin down the road, without thought on anything but the ride you are taking’.  In other words, enjoy the moment no matter where the travel road takes you.  Bike riding is like rock climbing, the activity totally absorbs you. It clears one’s mind of all thoughts; it’s a form of meditation. Bev and I have decided that after being around Rolf and his bikes again and following the joy of our recent rides along the Rhine in Switzerland and in Albania we are going to get our bikes into top condition when we get home and hit the road to feel the freedom only bike riding can give.  Some notable said that riding a bike makes your heart, mind and body sing; this I have to agree with.

For me, riding a bike was the only mode of transport when a child and teenager.  My first bike was a miniature penny-farthing which I built myself from a three wheeled dinky (a small three-wheeled tricycle). When I started work I built a more conventional version from scrounged bits and pieces and rode twenty-five kilometres to and from work each working day for five years.

Me and my bike (circa late 1950s). Interesting Brylcreem hair eh!

Brylcreem, an emulsion of water and mineral oil stabilised with beeswax, was a brand of hair styling products for boys and men.  It was first advertised on TV by the jingle “Brylcreem — a little dab’ll do ya!”  When the dry look became popular the last line was changed from “They’ll love to run their fingers through your hair” to “They’ll love the natural look it gives your hair.”   Imagine riding to work and back everyday with waxy Brylcreem in your hair!  I remember clearly the once a week hair wash and trying to get the hair cream and dust out of my hair (there were no shampoos to cut through the grime, only Sunlight block soap). In the days of my youth there was no shower in our house. We had to heat water in the copper out the back and carry the water into the bath in the bathroom.  My sister always had the first bath and I got into her water after she had finished.

I was not the first in my family to appreciate bikes.  My grandfather was instrumental in setting up a bicycle corps in England. Below is an extract from his diary relating to his activities.

My grandfather made this entry in his diary July 1933.  The time referred to above would have been just prior to WW1.

The London Cyclists in action.

Bicycles aided mobility of soldiers in both the First and Second world wars. The most notable action involving bikes was the fall of Singapore to the Japanese during WW2.  The British military heads in Singapore thought they had months before the Japanese would be anywhere near Singapore but what they didn’t know was that the Japanese soldiers were on stolen bicycles.   Mounted on bikes they travelled through Thailand and Malaya in fifty-five days and caught the Allies unawares.  The Allied soldiers could not escape the troops on bicycles. The constant pressure and relentless pursuit was psychologically devastating to the defenders, a true blitzkrieg — Japanese-style.

Front and back view of Italian soldiers during WW1 (1917) with folding bicycles strapped to their backs. Image from Wikipedia.

These days, especially in Europe and to a limited degree in Australia, electric-powered bicycles are becoming more common.  In Europe there are actually battery charging stations located in shopping centres and at railway stations so when you go shopping or leave your bike at a railway station you plug the bike in for recharging.  Hopefully the next innovation with regards electric bikes will be solar-powered ones.  Searching the net I found one.

The E-V Sunny bicycle has photovoltaic panels built into its wheels, powering a 500-watt  motor on the front hub (a 500-watt motor on a bike is more than adequate).  Perched on top of the rear wheel is a 17 amp/hour battery, which is charged by solar energy.  I’m curious to know how the solar panels on this bike stand up to rough road vibrations though.

Modern day bike expeditionists are usually conservationists and Rolf and Erika are no exceptions. They recently built a passive sustainable house.

Rear view of house. The roof is made up entirely of solar panels.

Rear view of house. The roof is made up entirely of solar panels.

The above diagram shows how a passive house works.  Fresh cold air (new air entry in diagram above) flows through a series of pipes buried in the backyard (ground heat exchanger) into the cross flow heat exchanger where the air is heated using solar panel energy. The warmed air then flows through the house and is drawn off (extract air outlet).  During the time we spent with Rolf and Erika the outside temperature was around five degrees and the inside temperature was at a constant twenty-two degrees, marvellous when you consider there was no other heating other than the system described above.

After a couple of refreshing days with like-minded people, Rolf and Erika dropped us at the Zurich airport and as we wandered, killing time, I got the distinct feeling that Rolf was dreaming of far-off places of places been, seen and to be seen.  Bide your time, Rolf, it won’t be long now.

Tomorrow we will be in Hong Kong.  It was intended to return to Australia via India but as I explained earlier in this blog we were unable to get visas.  India will have to be some other time.

Footnote relating to my grandfather’s diary: The last entry in his diary was ‘have a cold, put garlic in my socks and going to bed’.  Grandpa died some days later suffering pneumonia. He was eighty two years old.