Observations from the saddle of a bike: Canal cycling France: Dannemarie to Longevelle-sur-Doubs 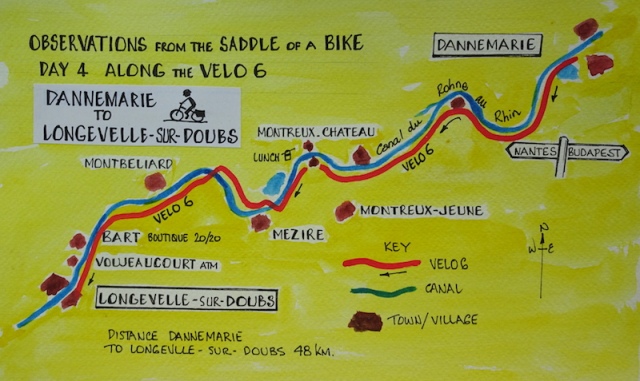 Map showing the day’s ride of approximately 48 kilometres and the location of Boutique 20/20 in Bart. 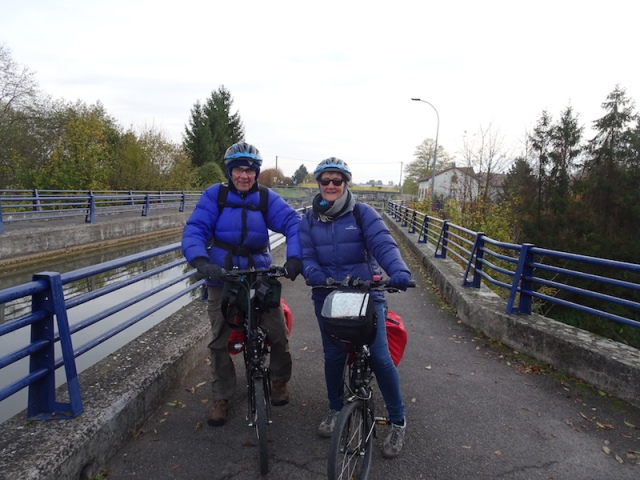 On the Velo 6 between Dannemarie and Longevelle-sur-Doubs. The glasses I am wearing are clear and they keep insects out of my eyes and providing I keep my mouth shut insects have little chance of penetrating my body. 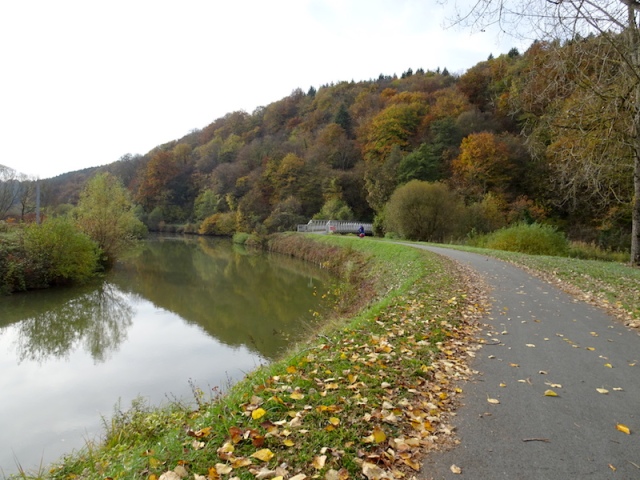 The approaches to the river Bourbeuse.

For most parts of today I didn’t wear my helmet as it would not fit over my woolly hat and in light of there being no traffic I took a chance. There was no possibility I would collide with a car and also there was no ice on the path so my bike was not going to slip out from under me.

Worldwide, the wearing of bicycle helmets and attitudes towards their use vary and the compulsory wearing of helmets is the subject of much dispute. Currently Australia and New Zealand are the only two countries that require the wearing of helmets and if caught without a helmet in NSW the fine, which is enforced, is $319 and the minor offence of not having a bell or horn on a bicycle attracts a $109 fine. Personally, I find ringing a bell on a bicycle an effort because it is hard to find the ringing knob if I am wearing gloves, it is easier and more effective to shout ‘Oi’ to warn pedestrians of my approach. Australia is not a bike friendly country as there are no major long distance dedicated bike paths such as in Europe. If one wants to do long distances and relatively traffic-free rides, outback roads are the only option and then the carrying of drinking water is a problem due to the vast distances between watering points.

A pedestrian and traffic free Velo 6.

The only events that come to mind to report on today related to the blocked path with no alternative detour, lunch on the road, the beautiful autumn colours of the deciduous trees and looking for accommodation at the end of the day. The searching for accommodation turned out to be an experience and with the help of Sophie, the owner of the Boutique 20/20 in Bart, we found ourselves in most salubrious digs. 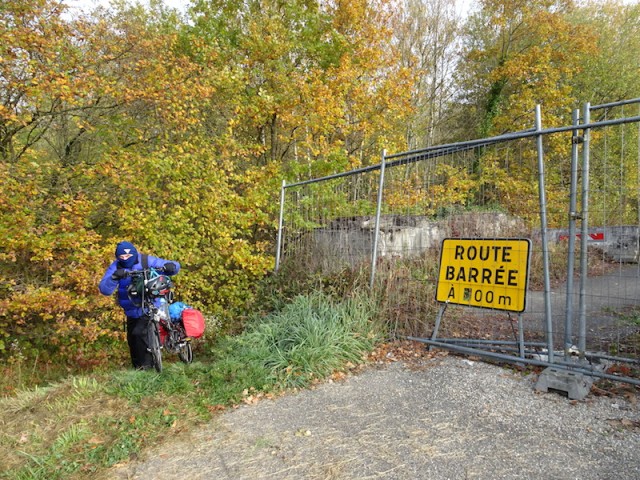 Firstly, the ‘route barree’. The danger zone was only about five metres wide and I could not see any reason for the barricade. To negotiate the barrier it meant dismounting and pushing our steeds around the end of the fence, a slip of the foot would have meant a swim in the canal.

Autumn colours of France along the canal. There is something romantically intriguing about autumn colours.

France does not have a national tree, but it is generally accepted that the elm tree is the tree of France. Over the years since the French Revolution the elm has been adopted as the Liberty Tree and it serves as a constant celebration of the spirit of political freedom.

La Peniche, a restored barge that is now a restaurant.

The history of barges and how canals evolved is a long and extensive story and the French were instrumental in their development. Examples include the methods by which barges were propelled. After horses were abandoned there were electric and internal combustion engine motorised ‘mules’, electric-driven barges akin to the old trolley bus where overhead wires provided electricity, and an elaborate cable system where the cable/chain lay on the bed of the canal and a winch on the barge picked up the cable and propelled it. This system was similar to cable-driven ferries located on inland waterways of Australia where they are used to this day for river crossings.

Today there are eco friendly barges powered by an electric motor and their electric supply is drawn from solar-powered batteries.

Following are a few images I borrowed from the Low-Tech Magazine www.techmagazine.com The magazine advocates the solving of modern problems with old ideas and is worth subscribing to.

An electric tractor towing a barge. 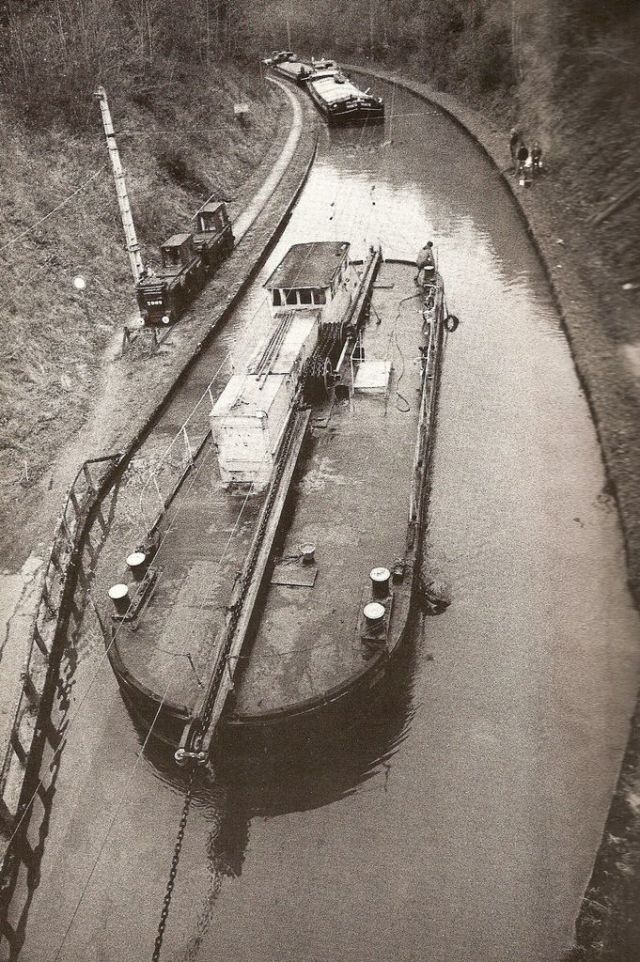 A barge pulling itself along a chain which was laid on the bottom of the canal.

Lunch today was one of those rare events. It was simple and without flare but I have to say it will remain with us for many years to come. Simple: wonderful French baguette, cheese and tomato.

Even BBear thought the food was good.

French bread has special qualities and is symbolic of the French Revolution. One of the factors relating to the uprising revolved around bread. The rich nobles and leaders of the Catholic Church had flour and hence bread, the peasant workers of society had none and they were therefore driven by necessity to storm the Bastille and raid the grain stores. It was of course a little more complicated than this but bread did play a symbolic part in the revolution.

The tomato was deliciously sweet, something not common with mass-produced varieties found in supermarkets. It was bought at a market, along with the cheese, in Dannemarie. The bread, tomato and cheese made for the most memorable lunch we had during our Observations from the Saddle of a Bike.

A photograph for the French-speaking potential riders of the Velo 6.

A photograph to prove the canals are still used. 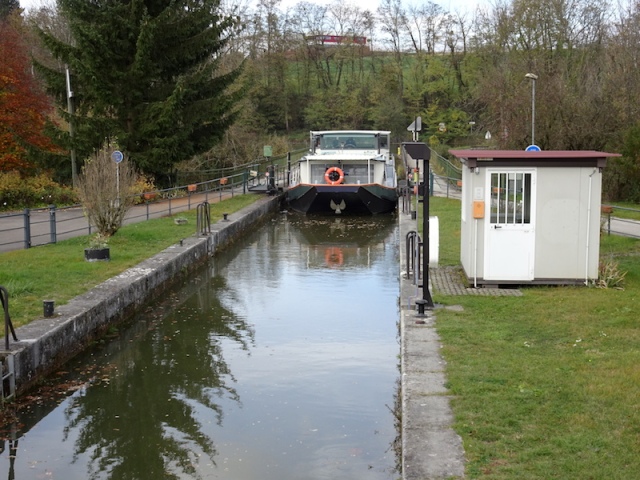 A recreational barge squeezing through a lock.

The boat harbour in Montbeliard.

At day’s end the search for somewhere to put our heads down presented itself and again it was not a simple task. We chose not to go into the larger city of Montbeliard but head for a smaller town. Most hotels in these towns had closed for the season and because we were not carrying camping gear, such as a tent and sleeping bags, we had to find shelter. In the quiet village of Bart, not far from Montbeliard, we found a hotel but it was closed for an afternoon siesta. We rode through the deserted village and thought we would enquire at any business that may be open on a Saturday afternoon. The Boutique 20/20 was the first business we came across so in we went.

Sophie, the owner of the Boutique 20/20, suggested we place our bikes behind an outdoor clothes rack then asked us in for a cup of tea. Whilst we took refreshment she began telephoning around and came up with the Aux Berges du Doubs at Longevelle-sur-Doubs, a further 10 kilometres. Unfortunately Jean-Pierre, the owner, didn’t have plastic money facilities and we were running short on cash so we had to get to an ATM in the next village about 3 kilometres away. Fortunately this was on the Velo 6 and in the direction we needed to go. Sophie left her shop and drove, with us riding along behind. The hole in the wall coughed up the cash, we kissed her goodbye and then took to the track for another eight kilometres.

And here is Sophie making enquiries for us.

Our bikes hidden behind the clothes rack. 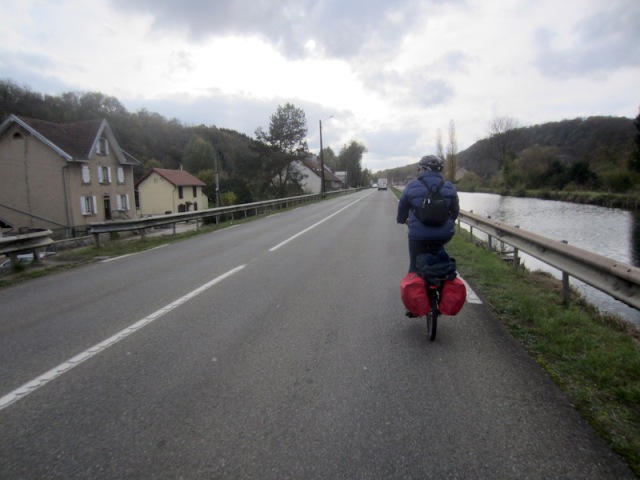 A gloomy ride on the road to Longevelle-sur-Doubs. 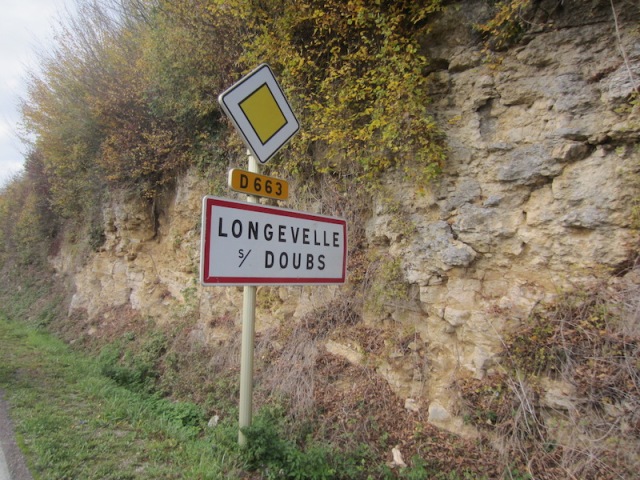 The accommodation was most comfortable and was furnished along oriental lines. There was a feeling of Buddhism in the air, or at least I thought so.

A metre long wall sculpture. Is this a stylised representation of Buddha’s feet?

The footprints of the Buddha symbolise his presence, as they prove that Buddha actually touched the ground. Sprinkling water or placing gold leaf on them will lead to forgiveness of sin, success in life and eternal happiness. You might think this is a strange analogy, Buddha’s feet and a bed and breakfast along the Velo 6. It can simply be explained by ‘that’s the way I think’.

Peacock painting on the wall of the bedroom.

The significance of the peacock in Buddhism as quoted by lionsroar.com: ‘When the monsoon started and the Buddha and his community of monks and nuns gathered for the annual rainy season retreat, they would often hear the plaintive call of the peacock. Ever since then, this bird with its electric blue throat and tail strewn with eyes has captured the Buddhist imagination’.

Enough of my wild imagination. We enjoyed our stay with Jean-Pierre and his wife. We learned about the difficulty of running a bed and breakfast since the introduction of the highspeed train to the area. The city of Montbeliard nearby is a centre for the automotive industry. From what I understand business representatives came to the region by slower train from Paris and stayed overnight in local accommodation. Now they come and return to Paris the same day. Highspeed trains have many disadvantages. Apart from affecting the accommodation economy, they are not as environmentally beneficial as first thought. Highspeed train lines have to go straight, meaning they pass through environmentally sensitive areas, which with slower trains could have been avoided. Also, in some places on either side of the line there needs to be a fence, sometimes concrete up to two metres high to eliminate animal movements onto the line. It is necessary to remove thousands of trees from either side of the line in some cases. In addition to the environmental factors, owners of land through which the line passes are brought into conflict with the authorities following the forced acquisition of land. Do we really need highspeed trains? Why are we in so much of a hurry? Can we not be satisfied with 100 kilometres per hour in lieu of 300 kilometres per hour?

The view of the Doubs River from our bedroom window. People come to Longevelle-sur-Doubs in the summer to stay and swim in the river.

On this note I bring the post to an end. The subject of the next post revolves around riding in the rain and a cyclist’s second worst nightmare (the worst is being hit by a car). Should you wish to be alerted each time we do a new post click on FOLLOW and make a comment if you wish.

6 Responses to Observations from the saddle of a bike: Canal cycling France: Dannemarie to Longevelle-sur-Doubs