Observations from the saddle of a bike:Canal cycling France: Longevelle-sur-Doubs to Baume les Dames

DAY 6 DRYING OUT at BAUME-LES-DAMES.

Rain this morning, the blessings from Buddha were not with us. Buddha said Life is Suffering and today we suffered, to a degree. The statement is not truly correct, what Buddha said was ‘dukkha’, which translated means uncomfortable and unpleasant.

This day was not an easy day. It was every cyclist’s nightmare, however we took solace in what George Bernard Shaw is quoted as saying: ‘Life is not meant to be easy, my child; but take courage: it can be delightful’. Regardless of the inconveniences when faced with an uncomfortable situation like today I think of the poor souls confined to retirement home beds or in wretched lodgings regretting not having experienced life as we did today.

Snow is not wet like rain and had it snowed like in the view from our bedroom window we would have rejoiced. 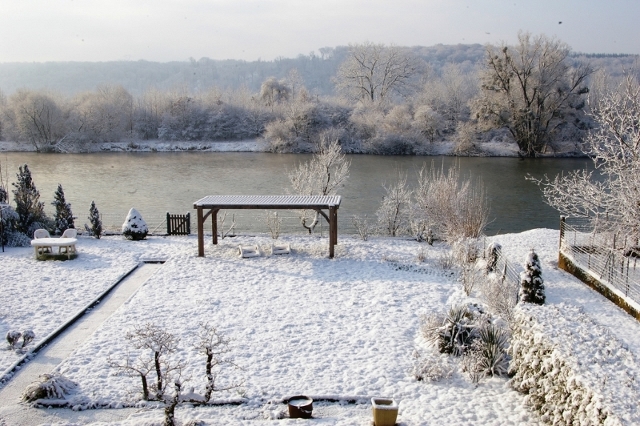 It took a lot of resolve to get on the road today, especially when confronted first thing with a flat tyre. After a quick tyre repair and a farewell to hosts Jean-Pierre and Christine we finally took to the road at 11am and regardless of the weather we persevered. There was an urgency in our movements as we had to get to the supermarket in the next town, 7 km away at L’isle sur Doubs before midday when it closed for the afternoon. Fortunately we managed to do so with 15 minutes to spare. Shopping comprised a cooked chicken, zucchini, carrots, onion, tomatoes, eggs, pasta and of course wonderful French bread. It’s amazing how a brew up, as Bev calls it, with simple ingredients,  is welcomed at the end of a wet day.

From a photographic point of view the day did not lend itself to any masterpieces even though some good results can be achieved on rainy days if one is carrying the technology to keep cameras dry. Following are a few photographs taken today. The rain was not favourable to getting the cameras out. 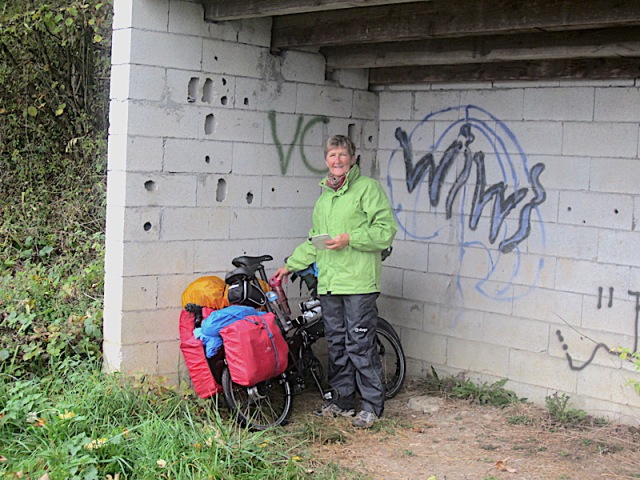 Taking shelter at the start of the day. Not conducive to staying too long. 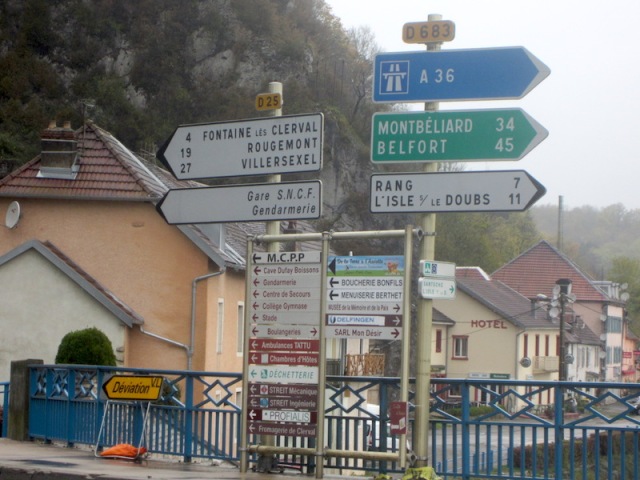 View from the bridge over the Doubs River at Clerval.

Heavy rain forced us to look for a hotel in Clerval. There was only one open but unfortunately the accommodation section was closed so we pushed on in driving rain. We tried a few more villages that would have had summertime accommodation but we were riding out of season so nothing was open.

In fine weather the landscape along the cycle route would have been spectacular with many photographic opportunities but we were wet and cold and felt the need to press on to where we eventually reached the larger town of Baumes-les-Dames.

Weir across the Doubs River providing water for a hydro electricity plant. A lock is in the foreground.

The lock. A lunch of chicken, tomato and bread was under the verandah of the lock’s control room.

A wet and deserted Velo 6.

We reached Baume-les-Dames at 4.30 and being a Sunday afternoon the place was deserted. The centre of town was a kilometre from the river and not a hotel in sight. At a food van we enquired about hotels and were directed up a hill. An imposing hotel was sitting on top of a rise overlooking the old part of the town and whilst Bev stood in the misty rain I walked up the steep driveway to enquire if it was open. I nicknamed it Bleak House Hotel because that is how it looked. It reminded me of the house in Charles Dickens’ mid 19th century writings. There was no acknowledgement to my knocking and on the way out I eyed a builder’s material store under the hotel and thought it would be marginally acceptable to have slept under the hotel amongst building materials. A couple of builder’s planks could have been strategically placed to make a bed and we would have been as ‘snug as a bug in a rug’,  just like moth larvae in a cocoon.

There is little action in French villages on a Sunday afternoon especially when it is raining and there was no-one to be seen. We coasted back down a steep road to the centre of town to see what we could find. After riding the shopping block we found one shop open, an ice creamery and chocolate shop. I asked the young lad behind the counter if he knew of a hotel that might be taking guests, he directed us to one nearby but it was closed. Returning to the shop I informed him we had drawn a blank and he directed us to a second hotel, which happened to be at the top of another long uphill haul. Neither of us had the desire to go there and find it also closed so I asked if he could telephone. The reply was the hotel Le Bambi was accepting guests so we put in one final effort and slogged up the long hill. Fortunately the rain had stopped but our e-bike batteries were flat because we had given them quite a workout on our 45km wet ride. 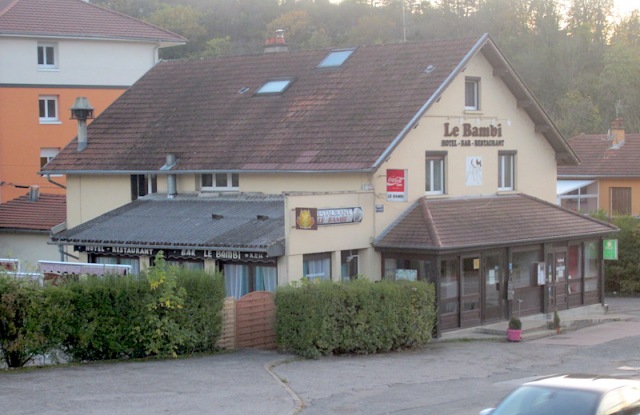 The arrival of two drenched oldies on bikes was an event, the owners put questions to us about where we had come from, where we were going and where do we find the stamina at our age to undertake a ride such as we were doing. In light of our situation these questions were not easily answered, all we wanted was a shower and to get into dry clothes but no, the questions kept coming. Finally we were shown to a minuscule room, however we had a roof over our head and the potential for getting dry and warm. Every conceivable projection in our room had clothes hanging from them: curtain rods, picture frames and even the bed ends had damp clothes draped over them. The owners of the Bambi were very pleasant hosts and we enjoyed our stay.

Why the name Bambi: Previous owners of the hotel decided they would specialise and serve venison in the hotel restaurant. Bambi was the name of the deer depicted in Felix Salten’s 1923 novel Bambi, a Life in the Woods and the subject of a Walt Disney animated film.

Last night I cooked a brew up in the yard and after savouring what was effectively a vegetable soup it was early to bed. After a ‘dukkha’ day we decided to stay a second night at the Bambi. The morning was sunny and we thought a walk around the village where we came in last night might be the thing to do.

Only half the buildings in the town centre were restored, many were in a poor state of repair reflecting the affluence or non-affluence of the area. Unemployment rates in France are around 9% of which 29% are its youth (according to UNESCO a youth is a person between the age of 15 to 24). For an economy to grow there has to be an element of unemployment. Employers see the unemployed as just a permanent reserve of labour on which they may call. Depending on the model used, planners consider a 5% unemployment rate is acceptable. 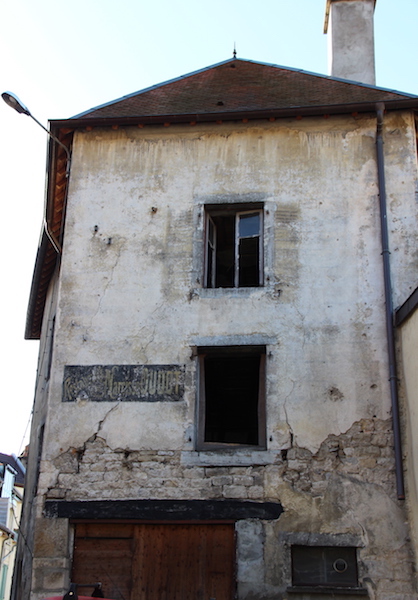 A complex staircase, although quite a fire hazard.

The above staircase is not really worth writing home about but I let my mind slip into its construction. Because of its complexity and the necessity to squeeze multiple access points into a confined space there was a certain amount of planning required. Top marks to the builders.

It is not my intention to show the town in a negative light and show here the deteriorating buildings, however I am attracted to them because an old neglected building talks to me of days gone by.

A modified bartizan on Maison a Tourelle built 1574.

The true architectural definition of a bartizan is an overhanging wall-mounted turret projecting from the walls of medieval and early 18th century buildings. Warders stood in these creations which were fitted with arrow slits from where the warder could fire arrows and give intending intruders a hurry along. In the above example I suspect the windows were once arrow slits. The brackets under this bartizan are called stepped corbels. 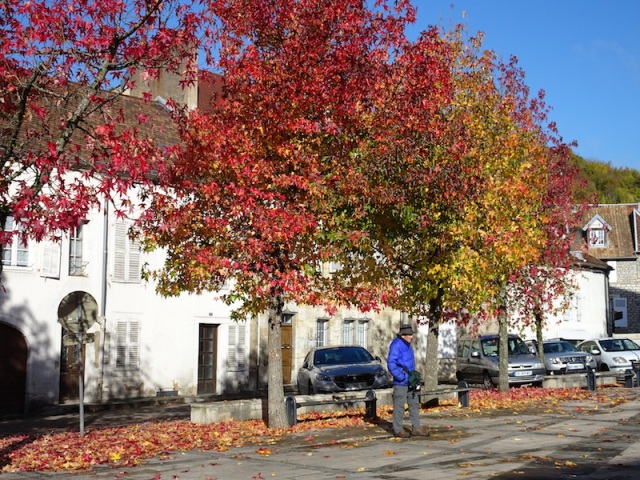 Bleak House Hotel, really named Logis Hostellerie du Château d’As, in a not so bleak mode the day we explored the town.

This hotel I’m sure would be a great place to stay. If we are ever confronted with it again, we might stay there but looking at the website it could be a bit too flash for us.

That’s the end of this post, it has been a short one but there was little to see through the rain. There is no doubt we will never forget Days 5 & 6 on the Euro Velo 6. To follow are our final days on this most wonderful ride. Stay with us.

2 Responses to Observations from the saddle of a bike:Canal cycling France: Longevelle-sur-Doubs to Baume les Dames